Gloss, the team behind the world’s largest arts and media company, is bringing the physical artwork into the digital universe with its first NFT titled ‘Warning Sign’.
The team is giving one lucky bidder the opportunity to purchase the 1/1 Warning Sign NFT.

The holder of the Banksy Warning Sign NFT will also receive a 5% equity share in the original artwork known as ‘Banksy, Warning Sign, 2006′. The original artwork has been independently valued at between USD$2,000,000 – USD$3,000,000 and comes with a certificate of authenticity from Banksy’s authentication arm, Pest Control. This combination of NFT and ‘real’ utility is a world-first offering in the NFT art space and will enmesh the physical art world with digital artwork.

A percentage of the proceeds from the sale of the Banksy Warning Sign NFT will be donated to the Fire Department New York Foundation. They represent the New York firefighters who were the first responders on 9/11. Many of those men and women lost their lives to save others on that terrible day.

Gloss created an NFT that is a re-elaboration and digitization of the original artwork it owns. It is an installation comprising of a CGI video production created with a team of talented artists. The work was created using photogrammetry to take scans of the original work. These scans replicate the original work and create a digital twin which will be contained in the blockchain for all perpetuity in the form of an NFT. The NFT will stand as a time capsule of one of Banksy’s greatest works of art in digital format.

The NFT opens with the re-elaborated digitization of the Warning Sign artwork, which was once a ‘roads diverging’ traffic sign. Banksy modified this image to create 2 vertical lines, representing the Twin Towers of NYC. Banksy then added a stencil of a small plane to the left of the vertical lines, representing the plane that was deliberately flown into the Twin Towers on 9/11. This act of terrorism was intended to create terror throughout NYC, and take away the country’s innocence. Ultimately, the terrorists were unsuccessful in this mission, as NYC and the rest of the country came together to become a stronger and more united people.

The NFT symbolizes this solidarity in a visual way – as the sign completes its 360-degree rotation, the plane to the left of the building disappears, and a flock of doves flies in an upward direction from the buildings. Each dove has its own unique flight pattern as it leaves the building, representing the uniqueness and individuality of each of the lives lost. 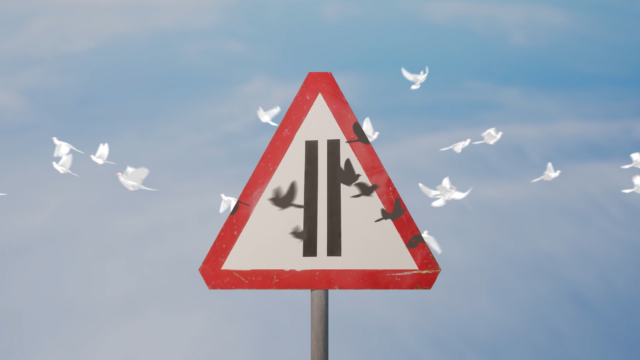 Gloss said: “Given that Warning Sign is one of Banksy’s most critically important and politically charged works of art, we wanted to create a whole new level of access and democratization to the artwork so that other people could also enjoy it. We want everyone to be able to participate – whether they have traditional art knowledge or crypto knowledge – so they can experience art and NFTs in a brand-new way.”

The Banksy Warning Sign NFT is currently being auctioned on OpenSea and will end at 4 pm ET (NYC time) on Sunday 5th of December.

For more information and to bid on this once-in-a-lifetime NFT, please go to www.glossNFTs.com/BanksyWarningSign

2021-11-23
Previous Post: The HODL Valley Metaverse – The Game That Can Grow Your Digital Wealth