Bitcoin crashes to $5,400 on Solana-based oracle Pyth Network after glitch 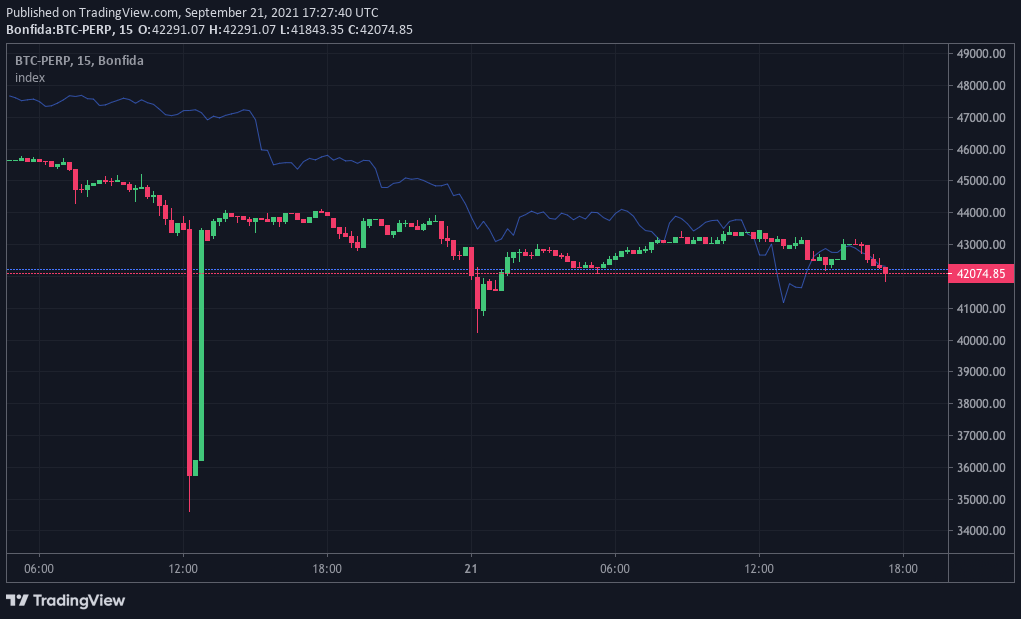 On Monday, September 20th, Solana-based oracle provider Pyth Network showed the aggregate price for the BTC/USD pair to be below $40,000. The lowest price reported by the oracle network was just $5,400 with a confidence interval of just over $21,600 for a single slot.

The massive difference between the average market price for BTC/USD and Pyth’s reported price caused a significant amount of liquidations on the market, wiping out as much as 12% from Bitcoin’s price in a single day.

What happened on Pyth?

The Pyth Network acknowledged the incident several hours after it happened, noting that its engineers were investigating the issue and preparing a full report.

Between 12:21 and 12:23 UTC the Pyth BTCUSD aggregate price was below $40,000 – the lowest price reported was $5,402 with a confidence interval of $21,623 (4x the asset reported price) for a single slot – which was off-market relative to the BTC price available on other markets

According to data analytics platform Bonfida, the flash crash Pyth suffered caused a series of liquidations on the perpetual futures protocol Audaces.

ChainLinkGod, a community ambassador for Chainlink, said that what caused the incident was the fact that Pyth only tracked a handful of market makers and exchanges. Providing accurate pricing to a wide group of blockchain networks requires not only a high number of data sources but the highest level of data quality.

“Data quality is an underappreciated but extremely important aspect of on-chain price feeds,” he noted in a tweet.

And while Bitcoin’s 156% price deviation on Pyth was the one that caused the biggest reaction, the oracle network reported even bigger price discrepancies with other tokens.

The oracle reported the price for DOGE/USD with a 2,800% deviation earlier this week and a 430% deviation on Monday.

In addition @PythNetwork’s major deviations for their $BTC, $AMC, and $GME feeds

Pyth’s issues were reportedly caused by the fact that its equity feeds rely only on two data providers, with only one of them being active. The Chainlink ambassador also pointed out that Pyth’s aggregation mechanism weights sources by their “confidence threshold,” but enables the oracles to report any confidence threshold value they want.

When combined with the fact that Pyth oracles consist of market makers that already actively trade against users, it shows that there is a definite conflict of interest in its business practice.

“Pyth does not provide transparency where this data is actually coming from. It’s also not clear if this was incompetence or something more malicious,” he said in a tweet.

The post Bitcoin crashes to $5,400 on Solana-based oracle Pyth Network after glitch appeared first on CryptoSlate.