Driven by several factors, the crypto market could be part of global risk-off in assets that have translated into investors fleeting to U.S. Dollars and Gold. The currency has been rallying since November 10th, when Bitcoin was rejected near $70,000.

The general sentiment in the market has taken a dip and approaches the fear zone but expects still maintain their bullish bias overall. Data from pseudonym analyst CryptoVizArt records a dropped in the Bitcoin supply held by exchange platforms.

According to the 180-day Oscillator shared by the analyst, these platforms’ BTC supply in decline is correspondent with an accumulation phase. Thus, Bitcoin could move sideways in its current levels before an upwards move to new highs.

In addition, the analyst shared CryptoQuant data to demonstrate that Bitcoin long-term holders are not taking profits at a high pace. An increase in selling pressure from these investors could send BTC’s price back to critical support zones at $57,000 and $47,000.

$57k and $47k are our key levels according to on-chain currently pic.twitter.com/XS0ZEsWPxG

In support of the bulls, Arcane Research records an uptick in Bitcoin’s 7-day average real trading volume. This metric currently sits at $6.2 billion after a $0.6 billion increase from last week. Arcane Research said:

Although we saw a slight increase in the spot volumes during the last 7days, trading activity is still unusually muted considering bitcoin’s current price. During the bull run this autumn, we haven’t seen the same big spikes in spot volumes as we did during the bullish breakout in the spring.

What Against Bitcoin’s Moon Mission

In a separate analysis posted by QCP Capital, the firm believes there are 3 major factors that played against Bitcoin in recent weeks. First, the activation of the Taproot upgrade triggered a “disappointing reaction” and a buy the rumor, sell the news event.

Second, the high inflation metrics published by the U.S. created a “risk-off sentiment across global markets”. Finally, the rejection of VanEck’s Bitcoin spot ETF proposal by the SEC.

Other factors could be influencing BTC’s price current price action, such as the signed of the Infrastructure Law by President Joe Biden. This law could endanger the crypto industry as it will classify exchanges, miners, and others as service providers required to reveal information about users. Information which, in the majority of cases, they lack. QCP Capital said:

We expect some gravity around this 60,000 level given the sheer size of options open interest at the 60,000 strike. Almost 13,000 BTC! We were neutral BTC last Wednesday across the greeks and have turned slightly long BTC spot and also small short gamma and vega on this move down. 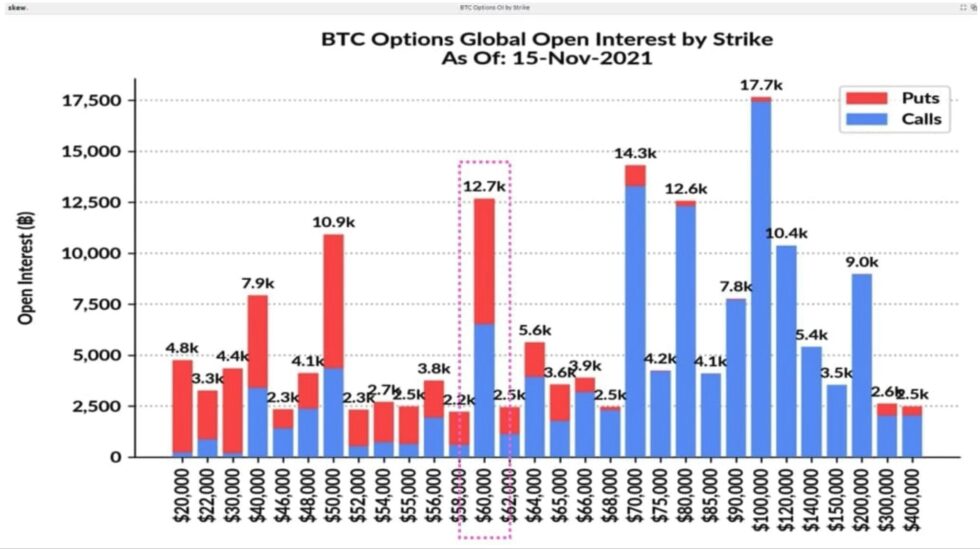