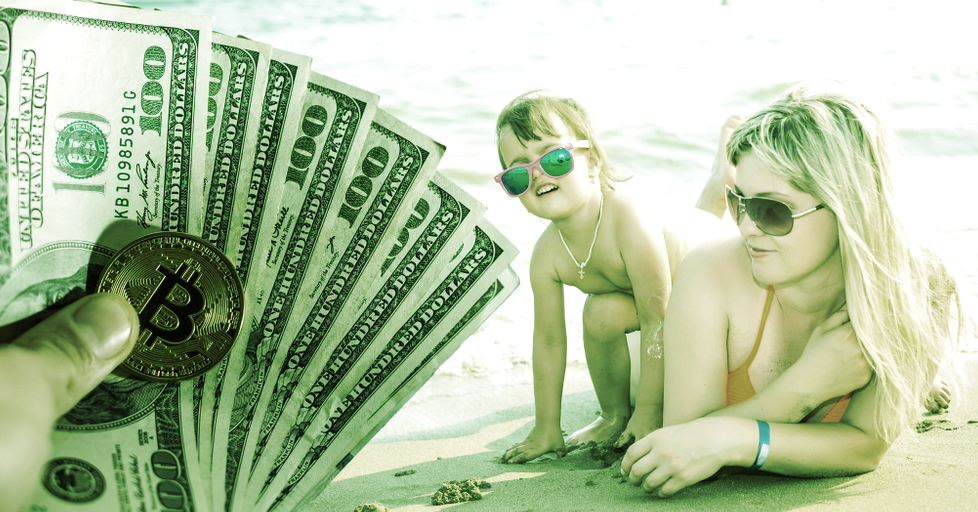 Here we go again! Though this recent crypto crash doesn’t seem to be as bad as the last bloodbath (when Bitcoin and its hapless shitcoin followers retreated more than 80%) the ongoing “market correction” has seen prices plummet more than 50%, just in the last month or so.

Scary? Nah—it’s all part of the glorious cycle of crypto life! But like mushrooms popping their fungal heads up after a good rain, look who’s back: The no-coiners.

‘Bitcoin is an apocalyptic death cult” — Curry with David Gerard

Let’s see what they have to say for themselves now, shall we?

During the dreadful crypto winter of ’18 to ’19, they declared that the whole sordid industry had died. It was all a bloody Ponzi. They even continued to cry doom when prices started to recover.

This is utter nonsense. There’s no profit on any asset until it’s sold. When you buy bitcoin, what you are buying is a loss. If you paid $18,000 for BTC, you are $18,000 in the hole. Price charts are meaningless https://t.co/KLtrYRg8S8

“When you buy bitcoin, what you are buying is a loss,” averred crypto-skeptic freelance journalist Amy Castor in December, 2020. “If you paid $18,000 for BTC, you are $18,000 in the hole. Price charts are meaningless.” Similarly, the economist Nouriel Roubini said: “The crypto bubble has burst for good and will not recover.”

My old friend David Gerard even wrote a worst-selling book debunking blockchain, and has devoted the rest of his bitter existence to ensuring that crypto gets ignored on Wikipedia, where he is an “editor.”

A funny thing happened on the way to the crash

Still, I’ve noticed that a curious thing has happened to some of my beloved no-coiners as they revel in this latest downturn. Yes, yes, they are pleased that things have turned to shit—Bitcoin has fallen so far from its $63,000+ peak in April that it’s now “only” up 300% for the year.

But more importantly, the recent bull run seems to have been helping our no-coiners eke out some sort of pathetic “living” in crypto. Some are doing so by becoming the go-to critics of the industry; others, surprisingly, have almost embraced it.

The banking expert and all-round Twitter agitator Frances Coppola, for instance, writes a regular crypto-skeptical column for CoinDesk, and Castor is writing a book deriding NFTs—as well as covering them for Artnet. (“Sure, NFT Sales Are Slipping—But a Closer Look at the Data Shows the Market Hasn’t Imploded (Yet)” was the headline on her recent, fiat-paywalled opus.) Meanwhile, Gerard, the no-coiner di tutti no-coiners, saw a parabolic, Bitcoin-correlated surge in his Twitter follower count (>13,000!) thanks to his bearish stance. A sysadmin by day, he is also somehow getting paid to write about Bitcoin for Foreign Policy, and is receiving ever more pitiful donations from the sallow-faced provincial bankers who subscribe to his hateful blog. Ca alors! (“Crypto loses people fortunes and destroys the planet, but it also makes me money,” said Gerard, revealing that since January he has pulled in a whopping £140 increase in monthly profit. “So who’s to say if it’s good or bad.”)

Subsisting on their parent’s entrails

Disgusted by it but obsessed with it and semi-financially dependent on it, no-coiners are a sub-subculture of our peculiar industry, a cabal of permanent in-house critics who are said to communicate with and support one another via a series of encrypted social media channels. They are a strange phenomenon, and crypto is probably the only “industry” on earth that harbors such an excrescence of professional haters, who subsist on the parent’s entrails as they try to drain its life function.

“As soon as Bitcoin crashes, I’m deleting Twitter,” sighed Castor. “I’m so disgusted by it. I like writing [about it] because people seem to listen to me. But it’s a thankless job … completely thankless.”

So why does she do it? It’s not as if she’s really raking it in. Why devote this beautiful life that hashem has bestowed upon us to hate?

Coppola, who worked as a programmer for banks for seventeen years, and who now writes about banking for American Express, has a more complex reaction: “I’ve been here since the beginning, and I still feel this huge sense of disappointment. Something that was meant to replace the bent and broken and deformed financial system has turned into a replica of it.”

And then there is John Biggs. A former top editor at The Block and CoinDesk, Biggs quit crypto with the kind of sudden and violent disgust a diner would display when finding a rat turd in his cottage cheese. In a November, 2020 article entitled “Bitcoin Could Hit $20K Again But This Time No One Cares,” he described Bitcoin as “everyone’s favorite decentralized digital currency based on hype, lies, and general malfeasance.”

It is surprising, then, that Mr. Biggs has recently decamped from Gizmodo and… founded a small NFT vendor called Rare.market.

“I like the lions,” Biggs unapologetically told me, “but I hate the tent, I hate the popcorn, I hate the ringmaster, I hate the clowns, and I hate going to the circus.”

“I saw NFTs as kind of the future, but the current crop was stupid,” he continued. “Only idiots would use OpenSea to buy a dumb GIF. I wanted to sell actual art so we partnered with an actual gallery. I like watches. I want to wear my watch in a game and I want to be the only guy in the game to be able to wear it because it’s unique. That’s kind of my dream with this.”

That clears things up! your correspondent lied.

Izabella Kaminska, the editor of the Financial Times‘s Alphaville vertical, has another weirdly nuanced apologia. Historically a strident crypto-hater, Kaminska has recently softened her criticism of Bitcoin, believing it to be a useful failsafe, or “apocalyptic safe-haven asset.”

“I think maybe they’re a little bit confused!” she said of her readership, which includes the vile and disgusting Gerard. “Maybe they think I’m suffering from cognitive dissonance.”

There’s even a newish publication that has become a favorite of the no-coiners, confirming that we are in a sort of no-coiner Renaissance. Protos was founded by David Canellis, an Australian ex-Next Web journalist and former shitcoin trader earlier this year. It has had its articles cited in the New York Times and the Private Eye, the greatest bimonthly newsmagazine on earth. The stories, which have traced links between Tether and right-wing political donors and revealed (sort of ) the bursting of the NFT bubble.

Canellis said in an interview that he didn’t actively court the no-coiners, and that he writes from the perspective of a disgruntled “hardline Bitcoiner” who wants all the extra crap that’s built on top of the industry to be washed away. But like filthy swine snuffling for truffles, the no-coiners managed to find him anyway.

Canellis seeks a return to the time when Bitcoin was used by socially awkward English cryptographers to purchase methadone. The upshot is Canellis’s magazine, which is bankrolled by anonymous investors—likely not short sellers, but who knows!—operates on the editorial principle that if the subject of a story likes the story, the journalist has failed.

“If I want to write an article about a crypto, I don’t want that article to be used to pump the price of that crypto,” he said. “If I ever see Protos on an [ICO] website and see ‘as seen on Protos,’ I’ll consider that a failure.”

That begs the question: What is success? Telling the truth? It’s hard to imagine that Protos could ever make money as the no-coiner website of record, but what do I know. Maybe banks and governments will buy ads!

It seems to me that though the no-coiners are all sort of benefiting from this thing, they’re at the thin end of the wedge; whatever they’re making pales in comparison to the winnings being made by the big time shills and holders.

So even though crypto investing is obviously a sucker’s bet, no-coinerism is an even bleaker gamble: a sort of poor man’s Pascal’s wager in which it is deemed better to never win anything, than to risk financial ruin. They are the perennial ghosts at the feast of bull-run extravagance who work “legacy” jobs to support their ruinous habits of not investing in $poocoin.

A case in point: Biggs’s NFT company, likely the first to be founded by a man who hates crypto, has so far failed to make any money. “My friends were building it while I was doing [Gizmodo] stuff,” he said. “Luckily I got canned just in time for the NFT fad to crash and to launch it to an uncaring world.”

Biggs and his ilk wouldn’t be credible skeptics if they actually made money off this racket, would they?