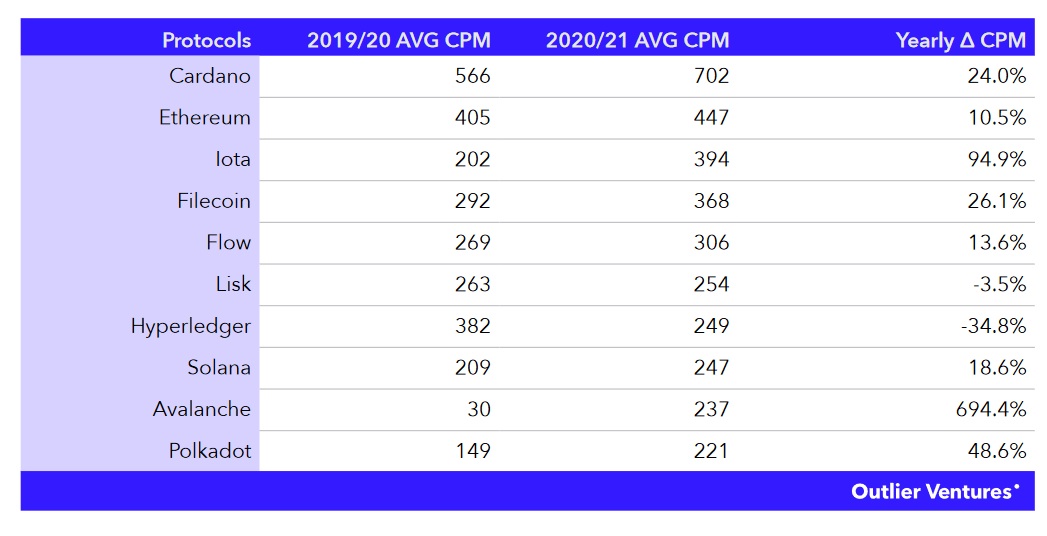 Research on blockchain development trends, compiled by Outlier Ventures, shows Cardano is the most developed from a sample of 50 open-source protocols.

Over a two-year period, the report aimed to identify development trends, including rising commit levels and protocols that demonstrate consistent levels of core developers.

It threw up some notable mentions, such as Avalanche seeing a near 700% increase in average commits per month (CPM).

But when it comes to the actual number of commits per month, Cardano came out on top and by a long margin. But why does this matter?

Cardano pulls away from the pack

A commit, or revision, is an approved change to a blockchain’s source code that the community and devs agree on.

The more devs that work on commits and the more commits are submitted, the more features and improvements can be expected.

In theory, strong development activity will increase the chances of a project succeeding. As such, analyzing commit metrics is one way to evaluate the fundamental strength of a particular blockchain project.

When it comes to average CPM, Cardano ranks highest with a total of 702 CPM. This is up 24% compared to the previous year when its average CPM was at 566.

Ethereum also showed year-on-year CPM growth of 10.5%. But in terms of numbers, it fell way behind Cardano with 447 CPM in the current year. This was also the case in the previous period, with an average CPM of 405.

In terms of analyzing commit trends, Outlier Ventures used a more macro time scale by looking at average commits by year (CPY) rather than by month.

Ocean Protocol ranked second in terms of the biggest CPY trend increase, coming in at a 354% increase over the previous period. 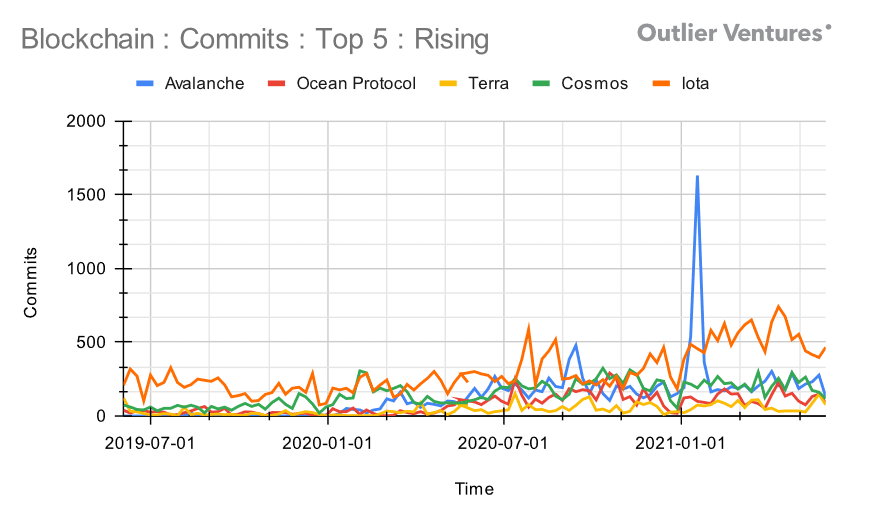 What methodology did Outlier Ventures employ?

To compile the report, Outlier Ventures examined projects by highest average throughput of commits per month. Then they looked at the top five projects that demonstrated an upward trend of commits. Finally, they analyzed projects that are in decline of commit levels.

The data source came from looking at thousands of repositories, millions of commits, and billions of lines of code.

With Cardano on a roll, is it only a matter of time before it ousts Ethereum as second-ranked crypto by market cap?

Indeed, following the successful launch of smart contracts, the coming months will prove critical in assessing whether that will happen.