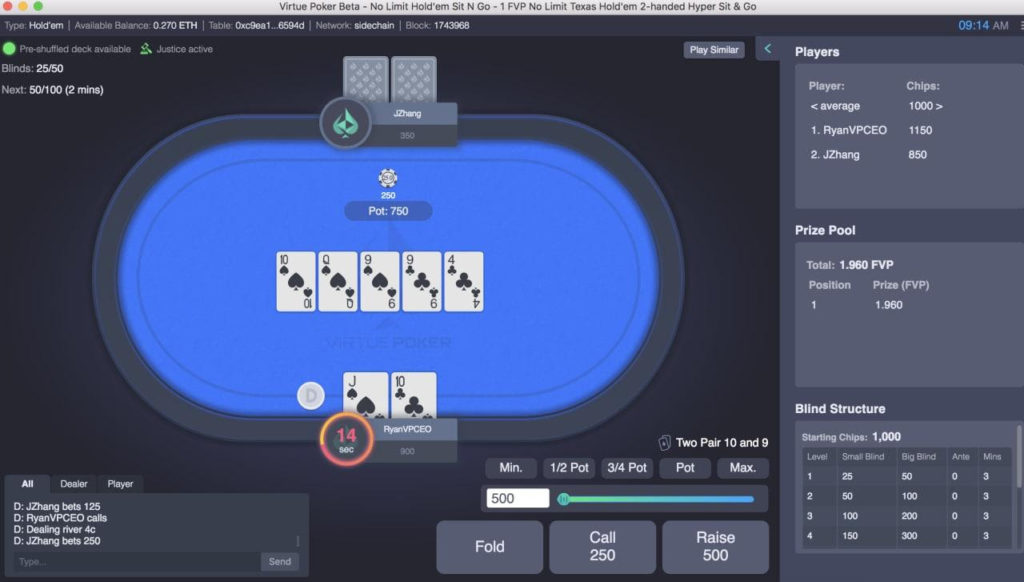 It has been announced on April 12, 2021, that Virtue Poker, a decentralized poker platform, has received $5 million in its latest funding round. The funding round in question was backed by a group of investors led by both ConsenSys and Pantera Capital.

The funds that have been raised will be used, as per the announcement, to fund the launch of the poker platform’s mainnet and this is expected to take place in May 2021. The platform itself was founded in 2016 and was built as part of the ConsenSys suite of blockchain projects.

The platform secured, just last year, its Gaming Service License from the Malta Gaming Authority, following four years of its initial development. It has also been undergoing testing for the last two years but will open fully to the public this year.

Part of its bigger goal is to level the playing field and break the monopoly currently being held by legacy game developers and its recent license will aid this goal. There are also plans to introduce cryptocurrency into the world of online poker which is dominated by fiat currency.

With the type of backing that Virtue Poker has gotten thus far, these goals seem within reach. Speaking on the recent funding round that included participation from DFG and Jez San, Ryan Gittleson, the CEO of Virtue Poker, said “I’m excited to see the Virtue Poker team realize its mission in bringing transparency and trust to the online poker industry. By working with regulators in becoming the first licensed blockchain-based platform, Virtue Poker legitimizes the use of this technology in the industry long-term going forward.”

This was a sentiment shared by Phil Ivey, who is well-known in the world of poker and is also an ambassador for Virtue Poker who claims that virtual poker is the future of the game. More details regarding the launch are expected to be announced in due time.

2021-04-12
Previous Post: 5 largest regulated US digital asset managers hold over $46B of crypto
Next Post: Investor Says Bitcoin Bull Run Is Not Just Getting Started, Run-up Is in the ‘Top of the 7th Inning’