The past week has seen the total crypto market re-reach $2 trillion bringing an air of confidence for the remainder of 2021. With that, thoughts turn to altseason, especially as several layer 1s are soon to launch major protocol updates.

Twitter user @WestieCapital reiterated this by mentioning some of the developments coming before the year ends. Specifically regarding the LUNA, ADA, KSM, and DOT tokens, with an honorable mention to AVAX and SOL.

“I truly believe what we are seeing is just the beginning of what may be the craziest 4 months for L1’s. As $LUNA upgrades to Col-5, $ADA rolls out smart contracts, $KSM and $DOT roll out parachains, $AVAX and $SOL continue development and adoption, things are gonna get insane.”

And with Bitcoin dominance floundering at 43.87%, the stars are aligned for @WestieCapital’s hunch to come to fruition.

Is altseason about to pop?

According to Blockchaincenter.net, altseason is defined as three-quarters of the top 50 coins outperforming Bitcoin in the last three months.

“If 75% of the Top 50 coins performed better than Bitcoin over the last season (90 days) it is Altcoin Season.”

By that definition, data shows the market is closer to Bitcoin season than altcoin season, with only 35% of the top 50 coins outperforming Bitcoin over the last 90 days.

However, on the matter of whether it is altcoin month, the answer is a resounding yes. Altcoin month has the same definition of altcoin season except with a time frame spanning 30 days instead of 90 days.

“If 75% of the Top 50 coins performed better than Bitcoin over the last 30 days it is Altcoin Month.”

Analysis shows, over the last 30 days, more than 75% of the alts have outperformed Bitcoin. AVAX leads the pack with 250% gains; LUNA ranks third-best performing at 203%, closely followed by SOL at 173%. Meanwhile, Bitcoin grew by only 15%. 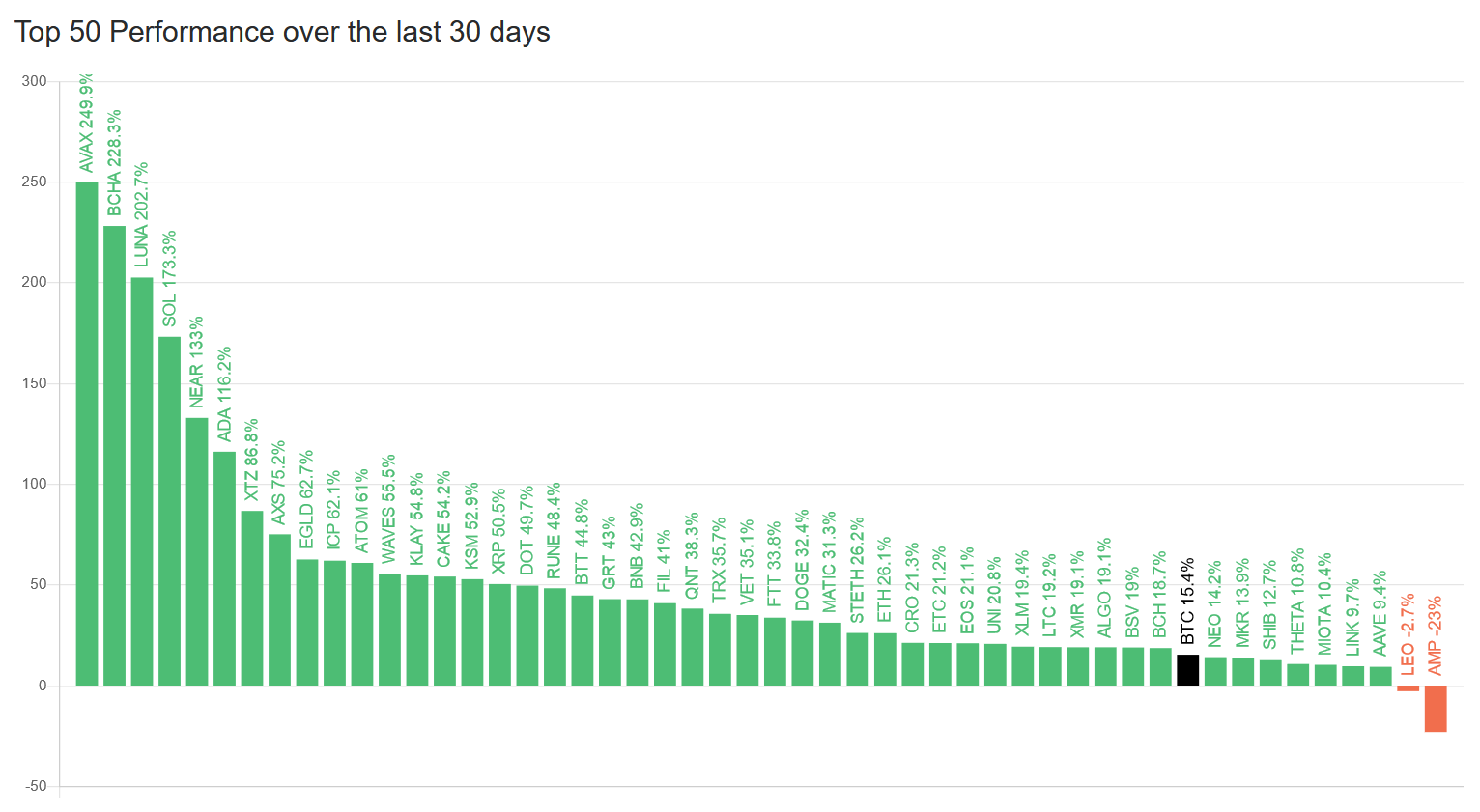 Can the alts build on this momentum for more of the same going into September and beyond?

Major updates on the way

Smart contract functionality on ADA is nearing rollout. This will open up the Cardano network to decentralized applications allowing for a multi-currency ledger, natively supported tokens, and NFTs, among other applications.

Both Polkadot, and its “wild cousin” Kusama, have already implemented parachain auctions. This process enables direct participation by bidding to support a project that wants to build on either chain. The process is similar in concept to crowdsource funding.

“There are many projects that intend to build on Polkadot and Kusama and each of them will need their own parachain slot to build upon. Rather than give the projects with the most funding a parachain slot, the Polkadot team came up with parachain auctions as a method to distribute the available slots in a more equitable manner.”

With these developments converging, the rest of the year looks set for a bang.