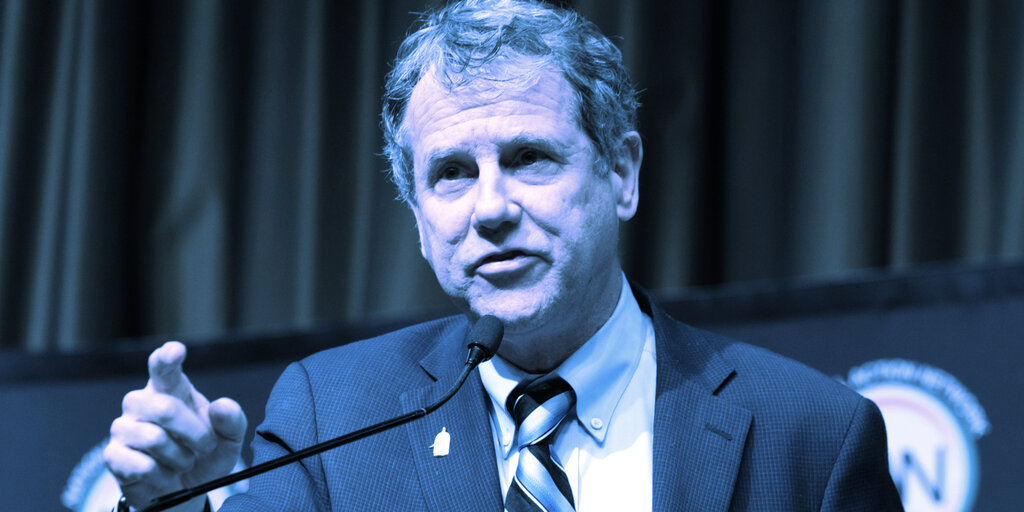 Several months after taking control of the US Senate, Democratic lawmakers are signaling a shift in their oversight of financial regulators, which could put so-called “crypto banks” in a precarious position.

Senate Banking Committee Chairman Sherrod Brown yesterday sent a letter to the acting head of the Office of the Comptroller of the Currency (OCC), Michael Hsu, asking the banking regulator to “reassess” the conditional national trust charters given to three cryptocurrency firms: Anchorage, Paxos, and Protego.

“A firm that cannot meet the rigorous requirements applicable to other banks should not be allowed to present itself to the public as a bank,” Sen. Brown wrote. “Paxos, Protego and Anchorage seek to broaden access to cryptocurrencies and other risky and unproven digital assets and emerging technologies to traditional bank customers.”

Sen. Brown argued that the listed cryptocurrency companies are using their charters to advertise their services as “safe, stable and dependable.” But Sen. Brown cites volatility—as evidenced by yesterday’s 30% crash—and market manipulation by power brokers, notably Elon Musk, as reasons why “the OCC is not in a position to regulate these entities comparably to traditional banks.” He also alluded to the fact that House colleagues, most notably House Financial Services Chair Maxine Waters, have called on the OCC to reconsider its rule changes.

OCC trust charters allow the recipients to legally take on some of the duties of traditional banks. While they can’t tap into the Federal Reserve’s payment system for settlements, they can act as qualified custodians of clients’ assets while taking cash deposits through a sub-custodian insured by the Federal Deposit Insurance Corporation (FDIC). Moreover, they need not navigate 50 different states’ money transmitter licenses.

“Crypto deserves a bank, and we are immensely proud of being approved as the one to set the standard.” -@diogomonica and @nathanmccauley

All of those, however, predate Michael Hsu’s appointment as Acting Comptroller by Treasury Secretary Janet Yellen on May 10.

Hsu, a former CEO of Kimberly-Clark and VP at Kraft Foods and H.J. Heinz, has split with his Trump-era predecessor, Brian Brooks, who joined the agency from U.S. cryptocurrency exchange Coinbase. Brooks has since been named CEO of rival exchange Binance.US.

Under Brooks’ leadership, the OCC aggressively revamped the regulatory landscape for banks to include cryptocurrency firms. In addition to granting banking charters to fintech firms, the OCC in January issued new guidance stating that banks themselves could wade into cryptocurrency by issuing stablecoins or using blockchain technology for payment activities.

On Tuesday, Hsu published written remarks to the House Committee on Financial Services stating that he was calling for a review of the OCC’s actions. “My broader concern is that these initiatives were not done in full coordination with all stakeholders,” he wrote.

That neatly matches with Sen. Brown’s objection. “It is also unclear whether the OCC engaged in the appropriate due diligence to stand behind this ‘seal of approval’ before granting these charters,” he wrote.

Hopes for a continuation of the OCC’s crypto banking policies into the Biden White House are flagging. Though former Treasury official and Ripple advisor Michael Barr was once considered to be the likely pick as Comptroller, Sen. Brown pushed for the nomination of progressive academic Mehrsa Baradaran, a Bitcoin skeptic.

In 2019, Baradaran told the Senate Committee on Banking, Housing and Urban Affairs: “While I share many of the cryptocurrency industry’s concerns with respect to failures of the banking industry, I do not believe cryptocurrency is the best solution to the problems of financial inclusion and equity in banking.”

The Biden administration has yet to put forward an official nominee, though it’s clear that Sen. Brown will have a significant say in who that will be—and how, once confirmed, that person will handle crypto banking.