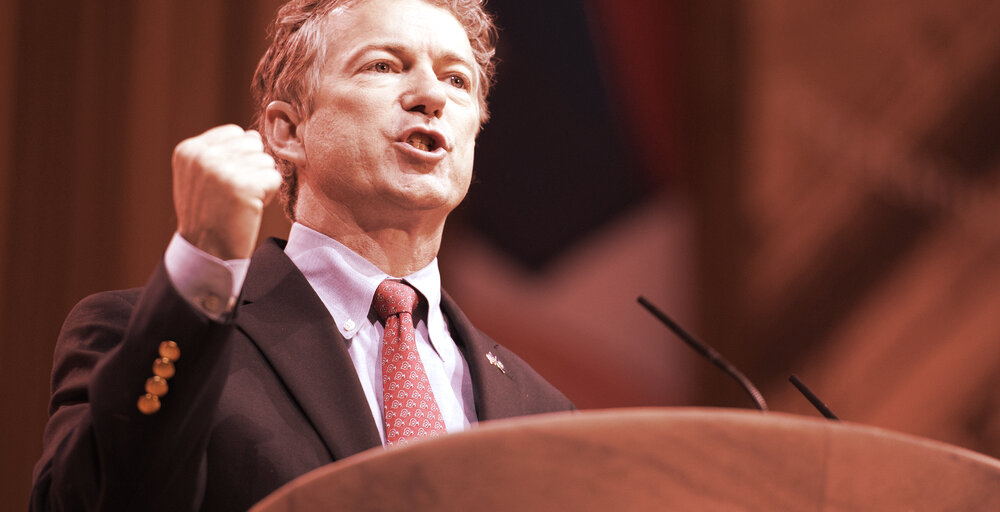 Senator Rand Paul (R-Ky) believes cryptocurrency may become the reserve currency of the world in the future, according to an interview that aired last weekend.

“I’ve started to question whether or not cryptocurrency could actually become the reserve currency of the world as more and more people lose confidence in government,” Paul told Axios.

This is not the first time the senator from Kentucky has made crypto-related headlines.

In 2015, the then-presidential hopeful said he would accept Bitcoin donations for his campaign—a move that has only recently started gaining traction across the American political aisle.

Paul, a libertarian, has been widely critical of big government, and government-backed currencies like the U.S. dollar are no different.

“But here’s what I’ve started to believe now…the government currencies are so unreliable, they’re also fiat currencies, they’re not backed by anything,” the senator added.

Paul’s comments raise an evergreen debate in the industry about whether cryptocurrencies like Bitcoin ought to be alternative mediums of exchange or simply another form of investment.

At the time of writing, El Salvador is the only country on the planet to have accepted Bitcoin—or any other cryptocurrency for that matter—as legal tender.

However, the policy has been rife with controversies. Protest after protest after protest, survey after survey, and claims of illegal arrests and a lack of government transparency have all mired President Bukele’s Bitcoin project.

In the United States, Paul’s view that cryptocurrencies may one day act as the global reserve also stands to be a divisive issue.

Earlier this year, a Newsweek poll found that only one-third of voters living in America’s swing states were in favor of cryptocurrencies becoming a legal form of payment—let alone becoming the global reserve currency.

In any case, Paul is not alone in his optimistic view of the crypto industry. Senator Ted Cruz (R-TX) is also bullish on crypto, claiming earlier this month that Texas’ abundant energy resources represented an opportunity for Bitcoin.

Cryptocurrencies have their fair share of political critics in the U.S., too, including Senator Elizabeth Warren (D-MA), who has repeatedly raised the alarm over the crypto industry’s damaging impact on the environment, as well as the industry’s lack of consumer protections.