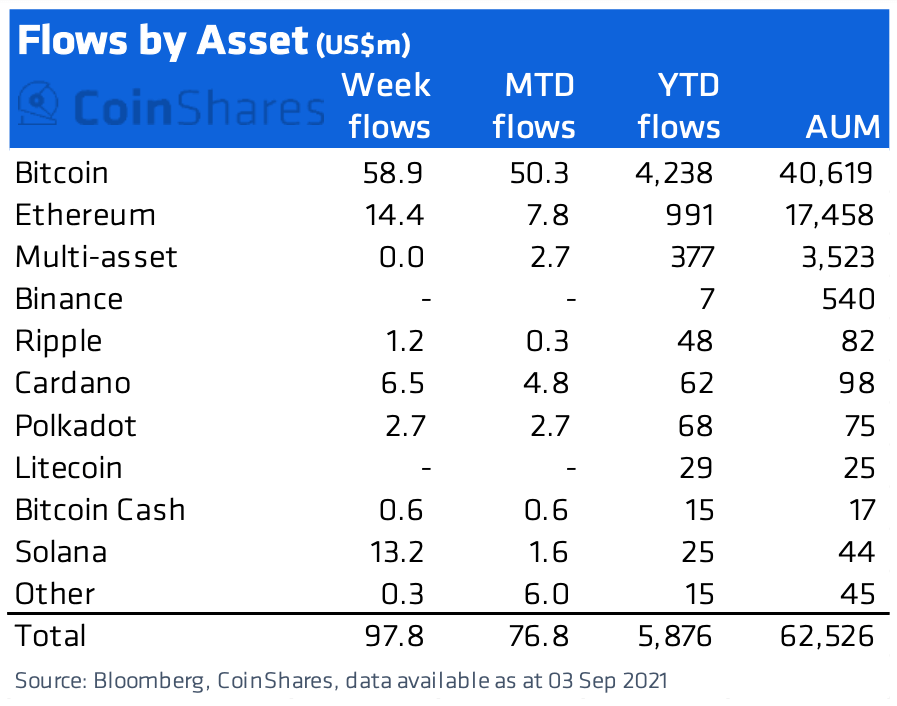 While last week’s report showed Bitcoin lagged behind altcoins, which saw their highest inflows in the past three years, the latest data shows the market has broken an 8-weel spell of BTC outflows.

Market sees inflows across all assets, but altcoins remain the favorite

A total of $98 million went into digital investment assets last week, making it the third consecutive week of positive inflows the market has seen.

According to CoinShares, the $140 million in inflows we’ve seen in the past three weeks suggests that investors’ sentiment towards Bitcoin has improved significantly, as the currency saw inflows totaling $59 million in the last week alone.

This is the first week of inflows for Bitcoin following an 8-week spell of outflows, the report said, noting that this is the longest dry spell endured by any digital asset investment product in the past decade.

And while Bitcoin investment funds still make up 65% of the market, the altcoin market share has risen to a record 35% of investment products. Ethereum, the world’s second-largest cryptocurrency by market cap, also saw the third week of inflows with $14.4 million, securing a 28% market share.

Ethereum’s position in the digital asset investment product market shows that concerns many investors seemed to have with Ethereum 2.0 have largely disappeared.

Among other altcoins, Solana has quickly outpaced the competition and is currently a market favorite. The coin saw weekly inflows of over $13.2 million last week, doubling its total inflows year-to-date. Solana digital asset investment funds currently have $44 million in assets under management (AuM), growing from just $15 million last week.

Cardano saw the third-highest inflows among altcoins, with the report showing $6.5 million went into the token’s digital asset funds across last week. With $98 million in AuM, it ranks just under Ethereum when it comes to funding size.