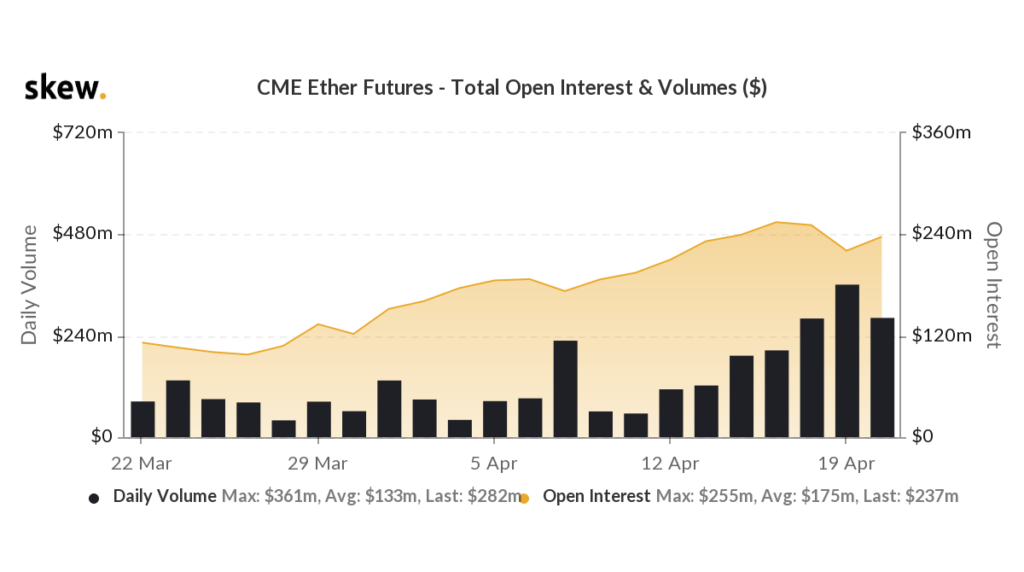 Ethereum (ETH) saw one of the most severe flash crashes that it has seen since the beginning of the year. The second-largest cryptocurrency by market capitalization saw its market value plunge by 18% within a few hours, shedding over 400 points.

The incident seems correlated with a coal and gas accident in Xinjiang, China, which caused a power outage. As Bitcoin miners were forced to shut down, the network’s hashrate fell by half, and all cryptocurrencies, including Ethereum, reacted quickly.

More than $1.16 billion worth of long and short ETH positions were liquidated across the board. Despite the massive losses, it seems like institutional investors took advantage of the downswing to enter the market.

Daily volume surpassed $360 million in a single day, and total open interest crossed $220 million. This was the highest trading volume observed since CME launched its Ethereum futures on Feb. 8. Such market behavior suggests that institutions could have bought the ETH dip.

IntoTheBlock‘s “In/Out of the Money Around Price” (IOMAP) model shows no supply barrier that will prevent Ethereum from recovering the losses incurred recently. Based on this on-chain metric, the only significant area of interest is $2,470, where roughly 3,800 addresses had previously purchased 17,100 ETH.

This area may have the ability to absorb some of the buying pressure seen recently. But if Ether can slice through this hurdle, it would likely aim for new all-time highs.

On the flip side, the IOMAP cohorts show that Ether sits on top of stable support. Over 300,000 addresses bought roughly 1 million ETH between $2,360 and $2,430. This crucial area of interest suggests that bears will struggle to push prices down.