Do crypto holders need to fear the digital dollar? 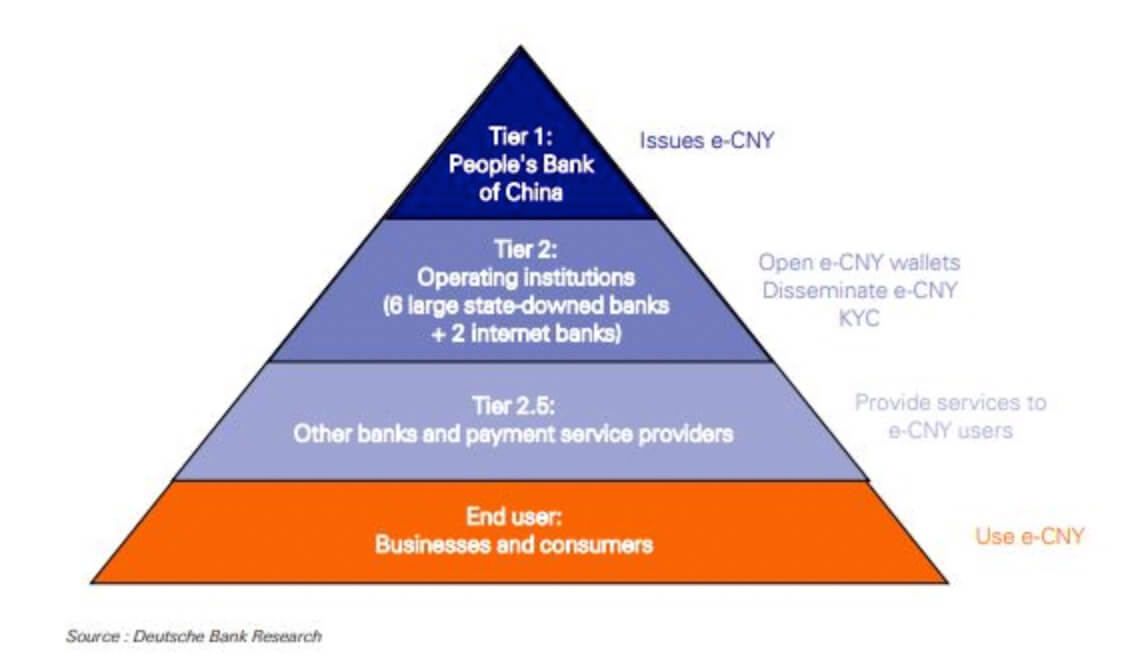 Through central banking, the U.S. government has already demonstrated it has access to infinity money printing. If it launches a CBDC – central bank digital currency – what would that mean for the value of crypto assets?

Why Would a Digital Dollar Be Useful?

Have you ever wondered why you can make bank transfers via your banking app, but not outside of banking hours, including weekends? After all, the mobile app – and the internet – are working 24/7 just the same. To understand this is to understand the key difference between an electronic dollar (the dollar you access through your bank’s app) and a digital one (a CBDC). This helps us understand why the digital dollar would even be needed in the first place.

The banking app may have digitized your cash deposits, but the relationship between the Federal Reserve and commercial banks still works the same:

In other words, the money issued by commercial banks to the public could be viewed as a kind of stablecoin, pegged to the Fed’s dollar. The monetary system derives its credibility from this fixed exchange rate. Moreover, deposit insurance and regulatory oversight make sure that the Fed money and commercial bank money is interchangeable.

However, because of all the intermediaries involved in the process, there is a lot of friction involved. Case in point, the ACH (Automated Clearing House) Network can’t settle payments over the weekend because the Federal Reserve doesn’t work.

Therefore, despite businesses being able to accept payments 24/7 through software such as Wave, your mobile app doesn’t have 24/7 access to electronic fund transfers.

What Other Issues Would the Digital Dollar Solve?

Having banking hours in this age of global interconnectivity and 24/7 online services is obviously outdated. The digital dollar would eliminate this tradition entirely.

Likewise, because there would be no need for so many intermediaries, both domestic and international payments would be settled faster and at lower fees. Perhaps most importantly, one would not even need a bank account to access digital dollars, but merely a mobile app wallet.

Lastly, the digital dollar would become the most powerful monetary weapon ever envisioned against both money-laundering and tax evasion. The reason is simple; all transactions would be traceable at any point in time.

How Would the Digital Dollar Work?

According to BIS (Bank for International Settlements), 86% of the world’s central banks are looking into CBDCs. Yet, China is the only nation that has already tested it. China’s digital yuan (e-CNY) has so far been used in over 1.32 million payment scenarios, accounting for $5.4 billion in transaction volume.

Without a doubt, major central banks are closely observing how e-CNY performs, including the Fed, so it is very useful to take a deeper dive into how it works. First of all, e-CNY appears to be based on DLT (distributed ledger technology), not blockchain per se. The difference between DLT and blockchain is that the latter creates cryptographically linked data blocks, making the record immutable.

In contrast, DLT doesn’t have to rely on this method, but it does use multiple data nodes (computers on a network). Simply stated, blockchain is just a type of DLT. In the case of the digital yuan, the People’s Bank of China (PBoC) opted for a permissioned DLT-based currency issued as M0 money supply.

This means that the PBoC will hold direct liability over e-CNY issuance. For example, in the United States, the Fed differentiates between M1, M2, and M3 money supply, each one for a different sector of the economy. This efficiency of having an M0 money supply makes it a risk-free system.

Next, an e-CNY digital wallet is not considered a bank account because only a mobile phone number is required. Optionally, the PBoC opted to make e-CNY as M0 digital cash, from being able to accrue interest. And lastly, commercial banks are in charge of withdrawing e-CNY and converting it into deposits.

In a nutshell, digital yuan, or e-CNY, is an account-based hybrid digital cash.

Will the Digital Dollar Use the Same CBDC Structure?

As you can tell, a CBDC can be tweaked in many ways. This is its main strength – programmability. However, the main difference is one between account-based and tokenized:

Unfortunately, CBDC’s programmability is a double-edged sword, potentially imposing severe downsides such as:

Lastly, because a CBDC would effectively create a centralized spending database, the central bank could make CBDC unavailable for the purchase of certain products.

If not treaded carefully, implementing the digital dollar could become a road to mind-boggling totalitarianism in which every aspect of monetary life could in some way be surveilled, sanctioned, directed, or curtailed. This leaves us with the most important question, how would CBDCs affect cryptocurrencies?

The Digital Dollar vs. Cryptocurrencies

When it comes down to it, the critical difference between digital fiat currencies and cryptocurrencies is permission type. Bitcoin, like thousands of other altcoins, uses a permissionless blockchain network. Meaning, anyone with a computer and internet access can become a part of the network as either a validator or a miner to secure it.

From this, it follows that a permissionless blockchain leads to decentralization and a trustless system. In stark contrast, a CBDC would rely on centralized trust. The public would be far removed from it, effectively renting digital money and counting on the goodwill of top controllers.

Most importantly, unlike Bitcoin which is limited to 21 million, a CBDC would be inflationary. This alone would prevent it from gaining value over time. In fact, quite the opposite would happen, just as it is happening now with soaring inflation rates across the globe, further driving people toward deflationary cryptocurrencies like Bitcoin.

These scam coins are getting crazy. One someone just shilled me:

jk that’s the US dollar

In turn, the most likely outcome of the digital dollar launch would be two-fold:

Case in point, when people discover that some decentralized finance (DeFi) protocols far outperform the stock market, “high yield” banking accounts at 0.50% APY will not look so attractive when faced with some of DeFi’s 6x – 20x gains.

Michael Sonnenshein, the CEO of Grayscale which accounts for $43 billion AUM, shared this assessment in a recent interview with ETF Edge:

“I think it all trends towards the digitization of money and something that investors and just your average person … who may not be in the investment market can glom onto as well.”

One could even argue that the very existence of Bitcoin, recently crossing a $1 trillion market cap, is keeping CBDC development constrained so it doesn’t spook the public with its surveillance features. In fact, the President of the U.S. Money Reserve, Philip N. Diehl, advocated for just such an approach – creating an anonymous digital dollar so its utility would be equal to physical banknotes.

The post Do crypto holders need to fear the digital dollar? appeared first on CryptoSlate.