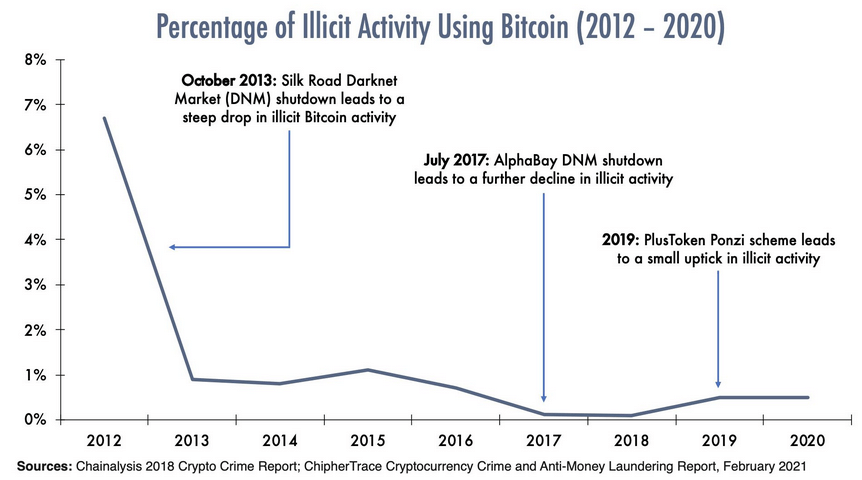 Michael Morell, the former Acting Director of the Central Intelligence Agency, disputes the narrative Bitcoin is full of illicit activity.

In an independent paper, Morell’s research led him to conclude that generalizations of illicit activity are overstated. Simultaneously, adding that blockchain analysis serves as an effective method of fighting crime and gathering intelligence.

Bitcoin is a terrible vehicle for hiding criminality

Before embarking on the study, Morell admitted that mainstream narratives, such as those pushed by U.S. Treasury Secretary Janet Yellen and ECB President Christine Lagarde, had already swayed his bias towards an anti-Bitcoin position.

However, in evaluating data from blockchain analysis firm Chainalysis, Morell soon realized there was more illicit activity conducted in traditional finance than Bitcoin.

“Just the opposite, that [bitcoin and crypto] weren’t rife with illicit activity. In fact, there was probably less illicit activity in the Bitcoin ecosystem than there is in the traditional banking system.”

He noted that the data shows less than 1% of Bitcoin activity relates to criminality. What’s more, this figure has fallen dramatically since 2012.

Kim Grauer, the Head of Research at Chainalysis, said cryptocurrencies hold a reputation for anonymity. But she dismissed that fallacy, implying Bitcoin makes for a poor way to hide criminality.

Bitcoin is more accurately described as a pseudo-anonymous network. While anyone can open a suitable wallet without providing KYC information, on/off-ramping can trail links between identities and wallets.

Morell said misconceptions about Bitcoin and criminality are factors in U.S. authorities failing to embrace cryptocurrencies and blockchain technology in general.

I hope this study will help advance a transparent and fact-based dialogue between innovators and policymakers to help ensure that we maintain national security without hindering the adoption of potentially revolutionary technologies.
https://t.co/m7wawVVPcV

He warned that this attitude could lead to losing the “technological cold war” with China.

“we need to make sure that the conventional wisdom that is wrong about the illicit use of Bitcoin doesn’t hold us back from pushing forward the technological changes that are going to allow us to keep pace with China.”

Li Bin, the Head of the People’s Bank of China, announced this week that six new regions, including Shanghai and Hainan, have been added to the pilot testing program for the digital yuan.

This is a far cry from the Fed, who have voiced indecision on whether a digital dollar will roll out.

2021-04-14
Previous Post: Former CIA Director: Bitcoin is “Too Transparent” for Criminals to Launder Money With
Next Post: Why You Should Invest In Tomorrow’s NFTs, Not Today’s