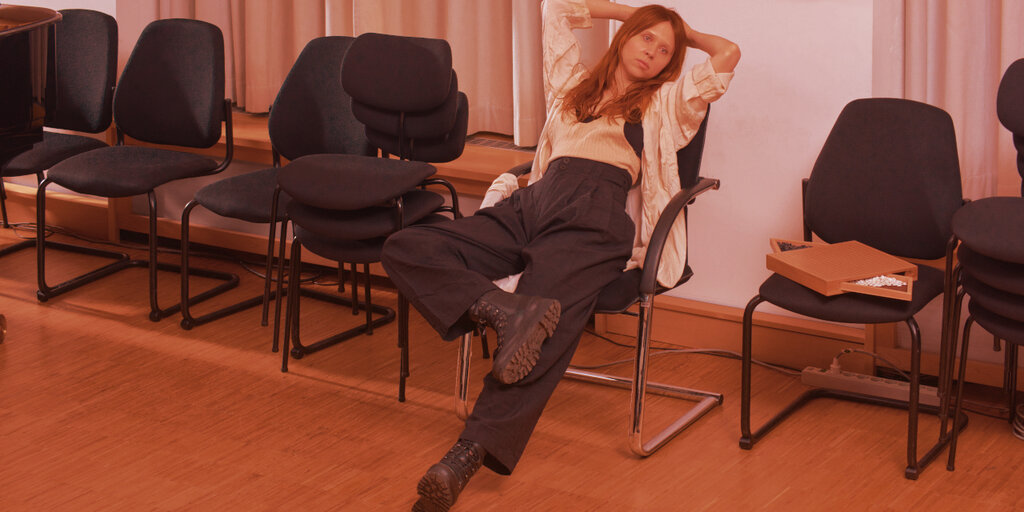 Few musicians over the past decade have worked as closely with emerging technologies as Holly Herndon. As a composer, she’s used imposing new systems (think artificial intelligence, machine learning, and neural networks) as a substrate for the human voice; distorting her vocals into uncanny geometries, she’s always playing with the boundary between the organic and the artificial.

Her latest experiment is a series of digital animations created with her partner, Mat Dryhurst, using generative software called Clip. An NFT tied to the first piece, “Crossing the Interface (DAO) I,” just sold for 13.0768 ETH (worth $36,466.75) on Foundation’s crypto art marketplace.

“We wanted to make something that made sense for this emergent file type, but also while maintaining, hopefully, some of the sublime in art-making that we’re kind of always searching for,” Herndon told Decrypt.

I just minted a new work on @withFND, a series of animations generated from a text I commissioned from @NegarestaniReza in 2013 for a piece titled “Crossing the Interface”

The piece—a kind of shifting, psychedelic fresco—has its origins in a text by the Iranian philosopher Reza Negarestani, which Herndon commissioned back in 2013 and incorporated into a musical work titled “Crossing the Interface.” It premiered at the Guggenheim in 2014, and was reoriented for a track on Herndon’s 2015 album, Platform.

The track was called “DAO,” which should give you a sense of how long Herndon has been thinking about crypto. DAO is an acronym for “decentralized autonomous organization”—a type of corporate governance structure based around cryptocurrency.

Clip generates images from text by scanning the internet for relevant images, chewing them up, and spitting them back out into a distorted landscape. Herndon described it as “painting or animating with text.” Dryhurst said it felt like “dream directing.” “This software knows everything,” he explained. “There’s a real challenge in translating your desires to what it produces.”

“Crossing the Interface (DAO) I” is accompanied by spoken-word narration of Negarestani’s writing, along with a computerized chorus generated by machine learning.

NFTs, or non-fungible tokens, have been around for years, but their explosion into the mainstream this past winter has divided musicians. Pitchfork and Stereogum ran largely negative pieces about the tech, and artists like Lucy Dacus and Jaime Brooks have condemned NFTs as a cynical cash grab. The songwriter Jacob Collier canceled a planned NFT auction earlier this year, citing concerns about the ecological cost.

Herndon is well acquainted with skepticism. “This is not a new game for me,” she said. “When I started out as a laptop musician, I was told that a laptop wasn’t an instrument, and I needed to figure out how to integrate a violin or something into my live set, or a guitar. And then I started working with machine learning, and people tell me that that’s a fad, or it’s removing the humanity from music, which couldn’t be further from the truth.”

Even still, she’s been disappointed by the way these concepts have been received by some musicians. “The music community saw their entire economy collapse, because of COVID,” she said. “And then all of a sudden, you have famous people being able to just kind of [summon] magic money out of the air through a technology that no one understands. And that was insanely alienating for the majority of musicians who had just seen their entire income stream evaporate.”

Herndon and Dryhurst host a podcast that frequently covers (and advocates for) crypto-based tech as a way of handing autonomy back to artists; executives at Foundation have appeared as guests.

“There’s a social cost to us doing this,” said Dryhurst of the backlash. “And there’s social jeopardy to us saying, like, ‘We’re in this.’”

Dryhurst chalks much of the criticism up to what he calls the “Faustian bargain of decentralization”—a space without guardrails is a home for both the well-intentioned artist and the dangerous grifter, the altcoin novice and the Bitcoin billionaire.

“Once the giant ticket, Beeple headline kind of things wash away, and the space matures a little bit and people get more involved,” said Herndon, “I think some of the potential will become more clear for people.”

Herndon has also maintained that for all the promise she sees in crypto, she’s still very much committed to the album as a format for listening to and understanding music:

“What I love about releasing records is I love having this postcard that I send out that people can spend time with. That’s the technology that’s been developed over decades, and I think it works really well in a lot of ways. But I think that it doesn’t have to be the whole story. There’s so much more that can be done there.”