Footprint Analytics:  Where Did the Influx of Capital to Blockchain Go? | Annual Report 2021

Capital flowed into the blockchain sector at an unprecedented rate in 2021, especially after March.

DeFi remained a key investment area for 2021, garnering over 30% of total investment rounds, followed by NFT with 19% in and blockchain infrastructure at 17%. In addition, several other industries also emerged as viable investments. 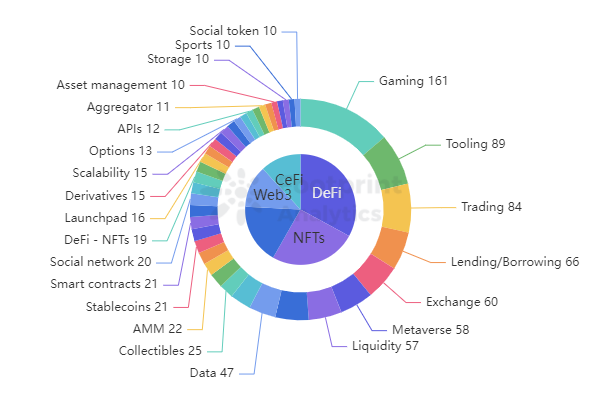 The largest shift from 2020 is the decreased prominence of CeFi funding rounds (however, the few rounds that CeFi did get were especially large.) 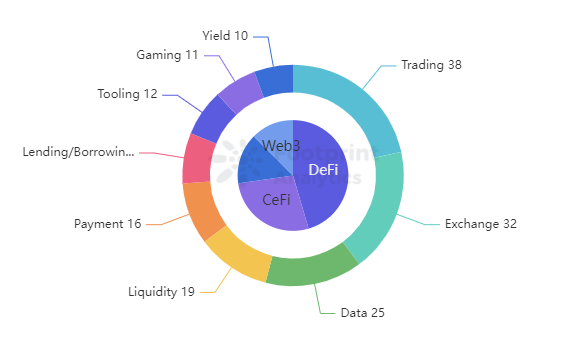 According to Footprint Analytics, More than half of 2021’s financing came from seed rounds, followed by Series A and strategic funding. 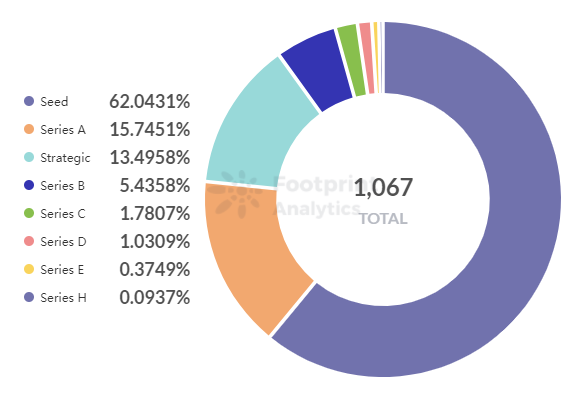 This indicates that blockchain is still in an early stage, with various new projects frequently gaining VC attention. Unlike in the traditional world of venture capital, where a single round can take years, rounds in the blockchain industry usually take several months.

Only a few projects managed to reach Round B or above. Most of these, including FTX, are in DeFi or CeFi.

Among the funding institutions, AU21 was the top in the number of rounds funded, with 119 total investments in 2021. Coinbase Ventures and NGC Ventures followed with 102 and 91, respectively. 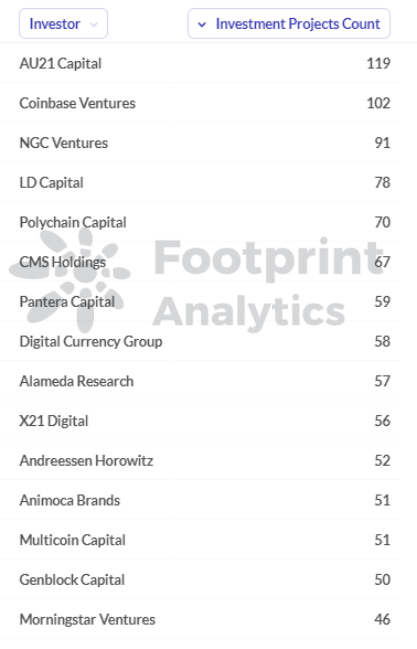 Footprint Analytics – Ranking of the project number by investment institutions

AU21 Capital is a San Francisco-based blockchain VC firm that invests in high-growth blockchain and AI companies, with its portfolio mainly focused on DeFi and also NFT. Its investments were mostly seed rounds.

Coinbase Ventures is one of the most active VCs in the crypto world, and it invested in over 100 rounds in 2021, mostly infrastructure and DeFi.

NGC Ventures, a funding platform launched by key members of the NEO community and veteran investors in traditional capital markets, also has a portfolio focused on DeFi and infrastructure.

Blockchain Funding Analysis by Categories in 2021

Whereas CeFi’s number of rounds decreased, it garnered the most funding by the amount of money raised. As centralized projects, CeFi projects usually have relatively well-established systems and a strong capital background.

In 2021, the total investment in CeFi was $14.6 billion, absolutely crushing other categories. The best month was October, which saw $2.5 billion in deals for CeFi companies and startups.

CeFi is also one of the only blockchain categories to see a handful of startups get past the seed round. 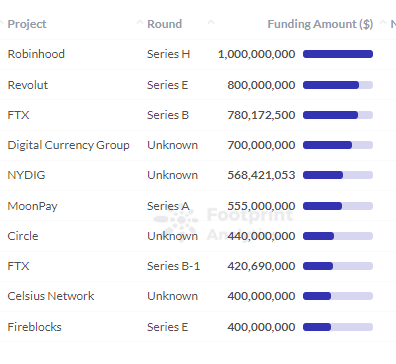 Footprint Analytics – Amount of Funding for Each Project in CeFi

DeFi is the central area of blockchain development and embodies the industry’s open, equal and decentralized spirit.

In 2021, the total investment in DeFi was $2.64 billion, with the amount reaching over 100 million for 11 out of 12 months, with the most money flowing in March, June and December.

The number of funding rounds is still dominated by seed rounds, which is inseparable from the frequency of innovative projects in the DeFi field and the rapid iteration of technology updates. 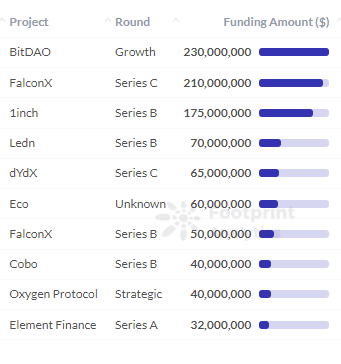 Footprint Analytics – Amount of Funding for Each Project in DeFi

NFTs are one-of-a-kind digital assets minted on the blockchain. Collins Dictionary named NFT the word of the year and the metaverse became known to the general public.

Seed rounds accounted for the majority of financing, which is expected considering the category’s newness. 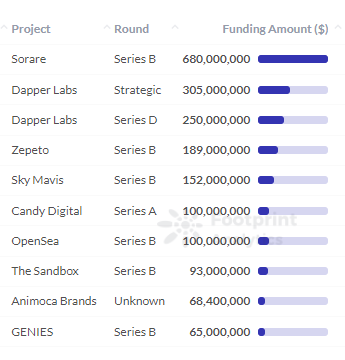 Footprint Analytics – Amount of Funding for Each Project in NFT

Infrastructure is a top priority in the blockchain space. With the many security breaches of 2021, this category received more attention than ever before.

In the infrastructure sector, the total amount of funding was $7.49 billion, with the highest monthly amount of $1.3 billion reached in June.

The funding rounds are still dominated by seed rounds and Series A. At present, blockchain infrastructure is in the stage of scale deployment and is in great need of capital support. 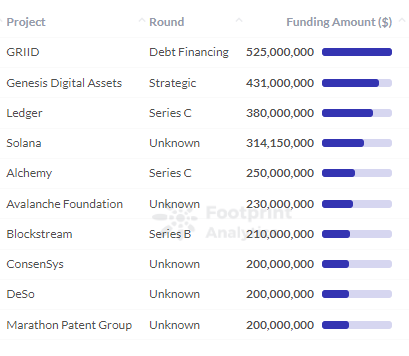 Footprint Analytics – Amount of Funding for Each Project in Infrastructure

Web 3 is the idea of a new version of the decentralized internet based on the blockchain. The concept of Web 3 was coined by Ethereum co-founder Gavin Wood in 2014 but started to catch on in a big way in 2021.

Web 3 funding totaled $2.2 billion, with an explosion of nearly $1 billion in a single month in November.

Web 3’s funding rounds are also predominantly seed rounds, which is because Web 3 applications are still very much in their infancy. 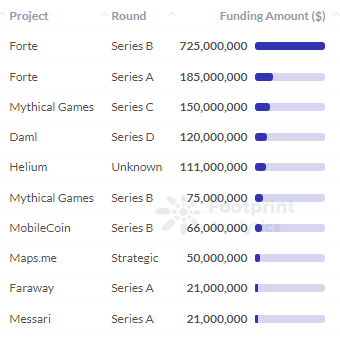 Footprint Analytics – Amount of Funding for Each Project in Web 3

Blockchain, being secure and decentralized, has many potential uses in finance and other industries, and institutional investors began to warm up to the industry in 2021 as research and applications matured.

In 2021, concepts such as metaverse and NFT exploded, which led to the emergence of many sub-sectors in the blockchain world. NFT, DAO, SocialFi, and GameFi projects emerged and got noticed by investors willing to place a bet on the future of the internet being decentralized.

Most funding stages for blockchain projects are still early, which shows that despite the headlines, the industry has yet to get close to full maturity. Many projects are eliminated in the rapid iteration and fierce competition in this field.

The outlook for blockchain financing in 2022 is promising. CeFi and DeFi are still the main investment areas, but infrastructure, NFT, and Web 3 have also attracted more and more attention as they go mainstream.

From 11 to 25 January 2022, click this hyperlink on CryptoSlate to get a free 7-day trial of Footprint Analytics! New users only!

This article is part of our Year in Review series.

What is Footprint Analytics

The post Footprint Analytics: Where Did the Influx of Capital to Blockchain Go? | Annual Report 2021 appeared first on CryptoSlate.

2022-01-13
Previous Post: ‘Being a Currency and a Security Are Not Contradictory,’ Crypto Can Be Both: Monetary Historian
Next Post: Report Highlights Tech Firm Ryval’s Avalanche-Powered Litigation Tokenization Concept