From Neigh to Zed: How Digital Horse Racing Became an NFT Favorite 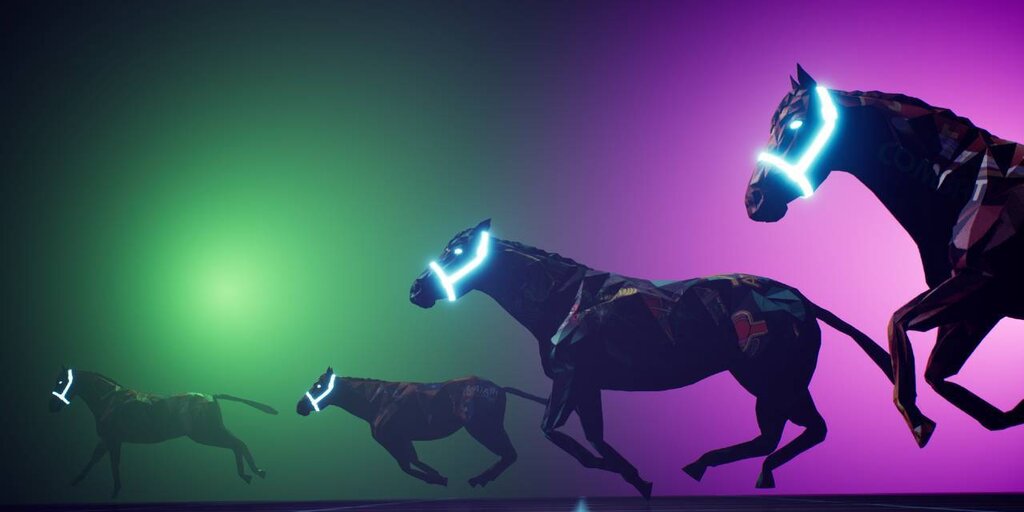 It all began with a poster in a Chinese restaurant in Australia.

Chris Laurent, co-founder of Sydney-based Virtually Human Studio and creator of NFT horse-racing game Zed Run, was picking up his dinner one night in late 2017 when he spotted an advertisement for a local stud farm on the wall. It offered a stallion for breeding, with a fee of AUS $15,000.

Laurent, a horse-racing enthusiast who was doing consultancy work for an Australian bookmaker at the time, took a closer look at the poster and noticed a caption underneath that stated this particular horse could breed up to 200 times a year.

CryptoKitties, a Pokémon-style digital trading game based on the Ethereum blockchain, had also been making headlines around that time, and while Laurent had initially dismissed it as “kind of silly,” seeing this poster made him realize that a version of CryptoKitties’ breeding system could be used to democratize racehorse ownership and share more of the money made with the average punter. At the heart of Zed Run is the non-fungible token (NFT), a provably unique crypto asset that can be linked to digital content. That content can be images, or video, or music—or, in the case of Zed Run, a digital horse.

At first, Laurent and co-founder Rob Salha couldn’t quite believe anyone was willing to buy their non-fungible gee-gees, particularly considering they were yet to launch the racing or breeding components of the game. But within a few weeks, horses bought for $80 from Zed were changing hands on secondary markets for as much as $10,000. That was when the pair realized they were on to something. “When it comes to blockchain adoption, the best way to bring in new users is to give them something that they’re familiar with,” Laurent tells Decrypt over Zoom. “The reason why Zed is doing well is because you don’t have to explain it: you buy a horse, pay to enter a race, and take home a portion of the pot if you’re successful—that’s literally it.”

Unlike the real thing, Zed Run races take place on a floating track that cuts through a Tron-style retro-futurist landscape. Each race is decided entirely on the innate abilities of the dozen competing horses, with an algorithm that determines the outcome based on thousands of possible results.

“When it comes to blockchain adoption, the best way to bring in new users is to give them something that they’re familiar with.”

Those abilities are based on the horse’s DNA, which is determined by three things: its bloodline (Nakamoto, Szabo, Finney, or Buterin, with each having its own characteristics), genotype (a number that shows how far removed it is from its ancestors, 1 being the minimum and 268 the maximum) and breed (Genesis, Legendary, Exclusive, Elite, Cross, or Pacer).

Only 38,000 Genesis horses—the fastest, purest digital nags in the game—will ever be available, but breeding two together combines their characteristics to create one of the others. For example, the offspring of two Genesis Nakamotos will be Legendary with their combined genotypes, while a Genesis Nakamoto and Legendary Szabo pair will produce an Exclusive Szabo with theirs, and so on.

The purer your horse, the better chance you have of owning a winner, but the key to Zed Run success is entering into the right races. After their first benchmark event, each horse is given a rating based on its performance, which then determines which class it belongs to. You can choose to enter races above your horse’s class, but not below, with points awarded or removed based on performance in subsequent races. The higher your horse’s win percentage, the more it’ll command on the secondary market and the more you can charge other owners to breed with it.

And that’s where Zed Run differs from most other NFT propositions—it actually gives people something to do with their investments. Owners of NFT art can sit on their purchase and hope the price goes up over time, but they can’t enter a JPEG into a race. “We’re one of the first NFTs that is giving the user a good experience,” claims Laurent. “Not only can you use your NFT as a store of value, you can play with it and it can yield you a return without you having to lose control of it.”

“We’re one of the first NFTs that is giving the user a good experience. Not only can you use your NFT as a store of value, you can play with it.”

Zed Run races are often nail-bitingly close, with supposedly ‘lesser’ horses often able to beat those with purer bloodlines. For those without skin in the game, though, watching one currently has limited appeal—but betting is just one of many things in the Zed pipeline. “We have spoken to the majority of major wagering operators from around the globe and we’re going to work with them in the future once we have the framework and legalities in place around being able to deliver that,” says Laurent. “It’s not something we want to rush.”

Skins in the game

A more imminent arrival to the Zed Run stable is skins. Horses currently come in various hues, including black, pink, and green, but soon Zed will start to auction skins in collaboration with what Laurent calls “some of the best brands in the world.” In keeping with the ’80s aesthetic, these will be delivered via collectible NFT cartridges, with the first ones coming as part of a partnership with Atari.

Initially these skins will be purely decorative, but eventually you’ll be able to limit races to only those who own a particular type of skin, part of a wider move to give the Zed community more control over how everything works, starting with a ‘party mode’ that would allow users to create private events just for their friends to enter. “We want the schedule to be more organic and user-driven,” says Laurent. “We think that’s the first step of passing over the baton to our community.”

Over the next few years, Zed will also introduce track conditions, weather, gate preference, fatigue, tiers within classes, and possibly even avatars, although Laurent says the latter would probably require a whole new game mode. “We had jockeys in our original mock-ups and then we put the game together and the horses looked amazing by themselves,” he says, before explaining how owners would be able to hire certain jockeys in an attempt to give their horses a better chance of winning. “That was another reason why we left it out, because of the complexity of cross-pollinating two NFTs that are based on performance,” he explains. “It may come in the future, I’m not too sure just yet, but it certainly sounds like a really interesting area to explore.”

There are loads of other ideas that Laurent is planning to experiment with—fences and jumping, racetrack ownership, and even 1,000-horse races—but it’s very much a long-term vision. Zed recently acquired a plot of land in crypto-based virtual world Decentraland, where users will be able to socialize with other owners, discover new horses and watch races, but Laurent has much grander plans for the future. “We’ve talked about AR and VR since the day we started this,” he says. “You could put a headset on and see some horses run up the Las Vegas strip, or pull your phone out and simulate them running through the actual environment in front of you.”

While limited general adoption of that technology means those kinds of executions still have fairly niche appeal, Laurent has no doubt that we’ll get there in the end, which is why if you zoom into a Zed Run horse you’ll see it has a jaw, teeth and a tongue, and it blinks and moves its lips and nostrils. “We sometimes call it a multi-generational NFT,” he says, before describing his vision of a Zed Run horse being passed down through families like an antique watch or beloved ring, eventually appearing in a Ready Player One-style metaverse. “That’s mind-bending stuff to think about and a lot of people won’t understand it, but things will go in that direction.” VR is an area that Zed Run’s creators are keen to explore. Image: Virtually Human

In the meantime, Laurent is also keen to reassure those who feel like they’ve already missed the Zed boat that it’s still early days. Only around half of the 38,000 Genesis horses are in circulation so far and there’s good reason the game is still labeled as being in beta.

“There are a lot of factors that are in the code but are not activated yet,” he says. “One thing that’s really important to the ecosystem is making sure every racehorse has a place, and ensuring that if you get into the game in five years that you still have a chance. As far as we’re concerned, if you’re here now, you’re not too late.”