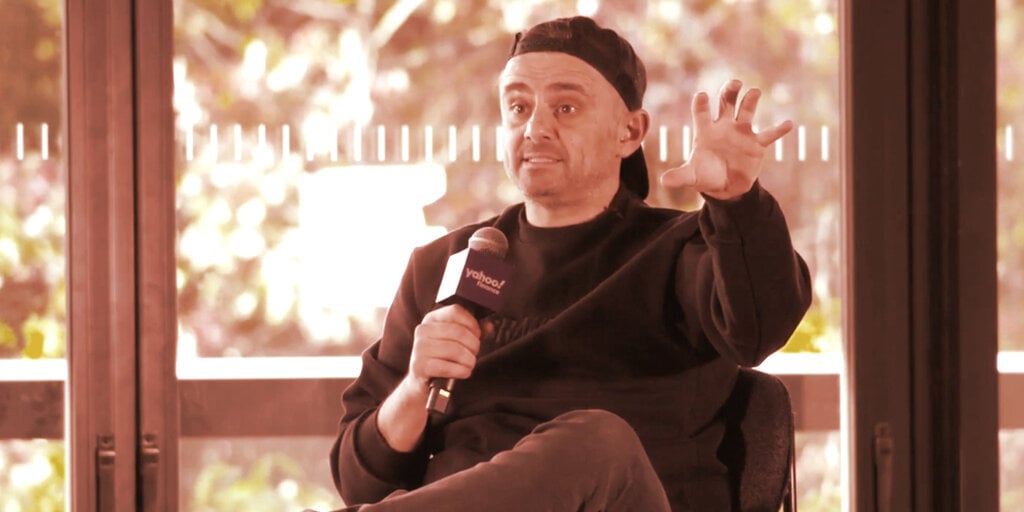 Investor and NFT entrepreneur Gary Vaynerchuk is incredibly bullish on the future of NFTs, including for collectibles, ticketing, and more. Even so, however, he believes that a significant pullback in valuation is sure to happen.

Speaking with Decrypt Editor in Chief Dan Roberts at today’s Crypto Goes Mainstream event in collaboration with Yahoo Finance, Vaynerchuk—the creator of the Ethereum-based VeeFriends, plus a collector of CryptoPunks and other NFTs—said that he believes an NFT bear market is coming.

“The conversation is about to get very interesting when we hit an NFT winter, because there’s way too much short-term greed, and supply and demand issues,” he said, while discussing why he believes people buy and invest in NFTs.

An NFT acts like a deed of ownership to a provably scarce digital item, such as an image, video file, or video game item. The NFT market exploded early in 2021, generating $2.5 billion worth of trading volume in the first half of the year. However, the early-year buzz appeared to fade in late spring and into early summer, prompting some to suggest that the NFT craze was simply a short-term fad.

Ultimately, the market surged to new heights beginning in August, with DappRadar reporting $10.67 billion worth of trading volume for Q3 alone—a 700% increase over Q2 2021. Along with immense trading activity, the latest boom has pushed popular collections like CryptoPunks, Bored Ape Yacht Club, and Axie Infinity to new price heights as well.

Vaynerchuk didn’t say when he thinks a pullback will come, but he spoke to the potential extent of the drop he believes will come—and how it would be analogous to the rise and fall of top stocks in the past.

“There’s gonna be a real [crash], I think,” he said in response to a question about previous short-term windows in which the NFT market dipped. “The person on the other side is gonna be like, ‘Gary, look, the [CryptoPunks] are worth $30,000, they were $800,000.’ And I’m gonna say, ‘Here, look at this chart on Yahoo Finance that shows you Amazon stock. Look what happened in March/April 2000, when the whole internet craze crashed.’”

Vaynerchuk said that he believes the majority of NFT projects will lose significant value over time, but that blue chip projects will rise to even greater heights. He called out collections such as CryptoPunks and Bored Ape Yacht Club, as well as pieces from XCOPY, who has had multiple NFT sales above the million-dollar mark. “XCOPY shows all the nuances of potentially becoming a Warhol, a Banksy, or a Pollock,” said Vaynerchuk.

“I do believe firmly that 90% of the NFT projects right now, [their] values will be less than that when it’s all said and done,” he said. “The problem is the 2% are going to be so much more extraordinarily high… that one is required to do the homework to see the opportunity.”

As the NFT market matures, however, Vaynerchuck expects the technology to be used much more broadly than for collectibles, which is one of the primary focuses of the current market.

“Every contract—all of them,” he said, when asked about future uses for NFTs. Vaynerchuk mentioned buying a home or car as potential examples. “It’s a smart contract that is confirmed, accepted, and transparent. It is the Holy Grail for humans. “It’s just that we’re the fortunate humans that are here when it’s being invented. It will be mundane in 80 years.”

“NFTs are going to be here for the rest of everybody’s life—and it’s going to get more meaningful, not less,” Vaynerchuk said.