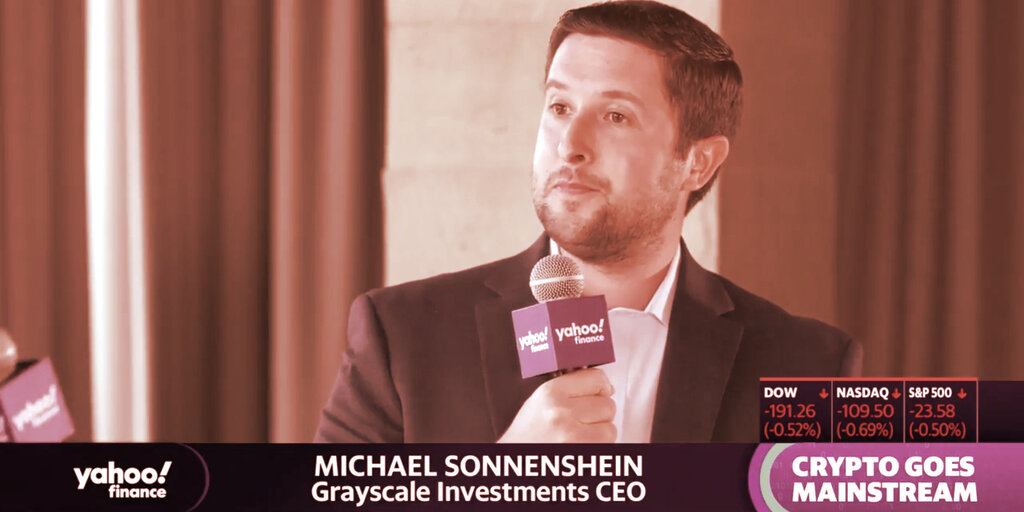 Grayscale CEO Michael Sonnenshein, who spoke at the Decrypt and Yahoo Finance Crypto Goes Mainstream event earlier this week, said the firm has seen “strong receptivity” to its Grayscale Decentraland Trust as a passive way for investors to get exposure to the metaverse.

The metaverse pairs the virtual world and character building mechanics of games like SimCity and Minecraft with a native currency that can be traded for other cryptocurrencies or sold for fiat. For Decentraland, which runs on the Ethereum blockchain, that currency is MANA. It can be used to customize avatars and purchase parcels of virtual land.

The token got a huge bump following news that Facebook had rebranded itself Meta and announced its intention to be one of the prime developers in the metaverse. Shortly after the announcement, MANA set an all-time high of $4.11.

But for investors who don’t necessarily want to actively manage an Axie Infinity account or build and sell scenes for MANA, the Grayscale Decentraland Trust has been an attractive way to get some exposure.

Metaverse Token MANA Up 100% After Facebook Rebrands to Meta

“So that is one way investors can think about putting money to work in an asset that is going to potentially appreciate with the rise of a metaverse like Decentraland itself,” he said. “That’s just one of several applications. We’re always scouring the landscape looking for other assets we can also bring to our investors.”

Earlier today MANA, the native currency of the Decentraland virtual world in the metaverse and the sole asset behind the Grayscale Decentraland Trust, was up as much as 28% over the last 24 hours. It’s more recently settled to $3.29, a 20.6% gain over yesterday. Over the last 14 days, MANA’s price has increased by more than 253%, according to data from CoinGecko.

The Grayscale Decentraland Trust launched in late February and currently has $49.2 million under management. It’s gained 943.8% since inception and 235.9% in just the last month.

Sonnenshein sees the metaverse as a disruptive Web 3 upgrade to the way people have experiences on the internet, separate from the ecommerce and social media tech giants that have ruled the Web 2 era.

“There philosophically is going to be a disconnect whether or not individuals and users want their metaverse experience captured, recorded and monetized by centralized platforms,” Sonnenshein said, “or if, in fact, those experiences are going to move to more decentralized applications where that value and experience and what’s owned is back in the hands of the individual.”

2021-11-12
Previous Post: ADALend: Announcing Imminent Cross-Platform Development
Next Post: Patriots Partnership With Socios.com Shows The NFL May Be Warming Up To Crypto