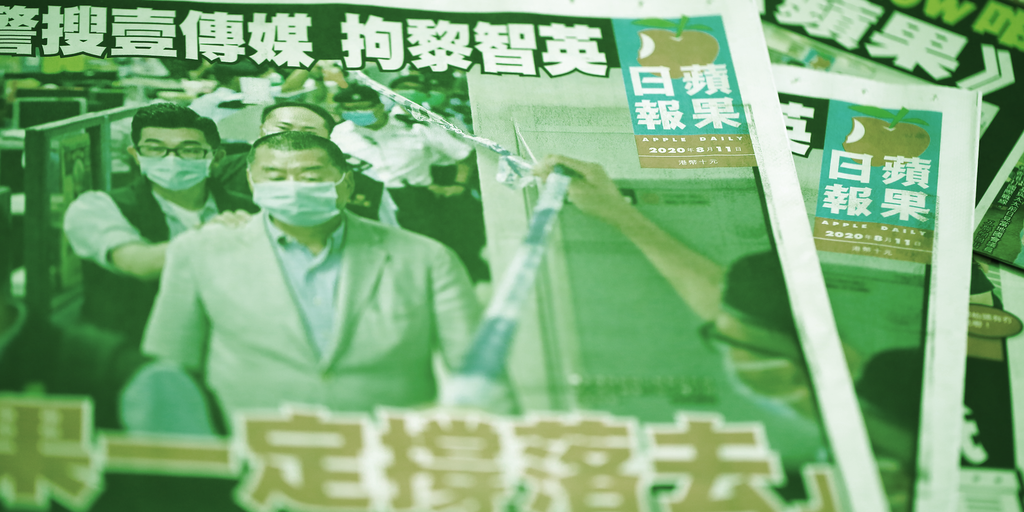 Apple Daily, the pro-democracy news outlet recently shut down by the Hong Kong government, has turned to blockchain technology to preserve its content.

Activists supporting the newspaper are backing up old articles onto blockchain platforms where censorship is near impossible to achieve.

“I’m not doing this because I love Apple Daily, it’s what needs to be done. I never thought that Apple Daily would disappear so quickly,” said Ho, a 21-year-old tech worker in conversation with Reuters.

As of earlier today, more than 4,000 Apple Daily articles had been uploaded onto ARWeave—a “global, permanent hard drive” built on blockchain technology.

Another blockchain solution called LikeCOin has been developed by a programmer named Kin Ko, which helps users authenticate any content on the platform. Ko told Reuters that “History must not be determined by those in power.”

Apple Daily was forced to shut down due to a national security law that allowed the government to freeze the outlet’s funds.

“Law enforcement actions taken by Hong Kong law enforcement agencies are based on evidence, strictly according to the laws of Hong Kong, and for the acts of the persons or entities concerned,” a spokesperson for Hong Kong’s Security Bureau reportedly said.

“Thank you to all readers, subscribers, ad clients, and Hong Kongers for 26 years of immense love and support,” Apple Daily read in an online article. “Here we say goodbye, take care of yourselves.”

The shutdown imposed on Apple Daily has been considered a major blow against press freedom in Hong Kong. Taiwan’s Mainland Affairs Council released a statement amidst the closure of the paper, saying it felt “extreme regret,” and “solemnly condemned” the decision.

This is not the first time government censorship has been met with blockchain technology.

There have been a wide variety of similar responses to censorship around the world, including the Uncensored Library, an archive of works from previously censored journalists that now lives on Minecraft.

The library was designed by Reporters Without Borders in collaboration with London-based company BlockWorks. “Once it’s been released, it multiplies, and it is therefore much more difficult to take down,” James Delaney, founder of BlockWorks, told Decrypt at the time.

Other anti-censorship blockchain solutions have appeared alongside the Uncensored Library, including the decentralized alternative to Wikipedia—Everipedia.

Though these platforms have yet to reach the same critical mass as their more popular counterparts, events like those in Hong Kong highlight how important their existence is.