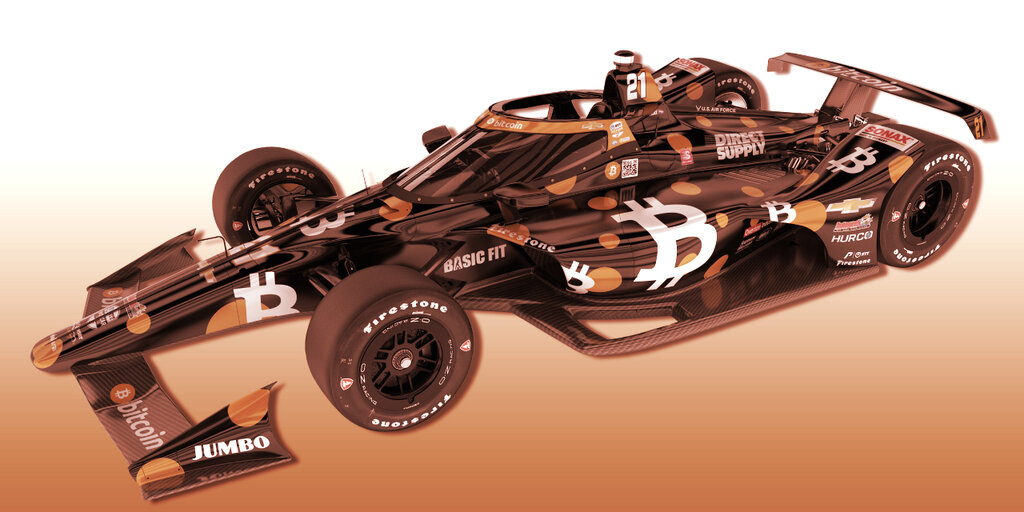 Tesla may have fallen out of love with Bitcoin, but there’s one car still carrying the flag for the world’s largest cryptocurrency. Later this month, Ed Carpenter Racing driver Rinus VeeKay’s No. 21 Chevrolet will take to the track in the 105th Indianapolis 500 sporting Bitcoin livery.

“I could not be more excited that this project is becoming a reality,” said team owner Ed Carpenter in a release accompanying the announcement. “To bring my personal interest and immersion in Bitcoin to our industry is historic. Just as Bitcoin is revolutionizing our financial system, I see it as an opportunity to transform how we operate within our own motorsport industry.”

As the supply of #Bitcoin is fixed at 21 million with no more to ever be made, Bitcoin will be fixed on @RinusVeeKay’s No. 21 at the #Indy500.https://t.co/ukrj1DxucX pic.twitter.com/X5gnSUZQF5

The Bitcoin livery, which features the iconic orange “B” logo on a black background, is the result of a partnership with payments and remittances app Strike, which contributed $100,000 towards the project and will fundraise on behalf of the Bitcoin community in a “peer-to-peer contribution model”.

A QR code on the car itself enables donors to contribute funds; according to Zap CEO Jack Mallers, 70% of the proceeds are allocated to funding open-source Bitcoin development, with the rest going towards the Bitcoin car and local Indianapolis charities, including the Riley Hospital for Children. Mallers, who contributed $25,000, said that other notable donors include NYDIG founder Ross Stevens, who added $250,000 to the pot, along with NFL star Russell Okung and What Bitcoin Did podcast host Peter McCormack.

Speaking to Autoweek, Carpenter explained that Strike is converting the Bitcoin received into fiat currency. “Our suppliers that we work with, none of them accept Bitcoin yet, so we convert it to US dollars and operate just like we would with any other partnership,” he said. And down the line, he hopes the cryptocurrency will become more integrated with the sport. “Obviously, I can’t pay my Chevy contract in Bitcoin yet, but I see a future where that will change,” he added.

And outside of the racing circuit, other sports are turning their attention to cryptocurrency. UK soccer club Southampton FC recently inked a deal to receive performance-based bonuses in Bitcoin, while Crypto.com has sponsored the Coppa Italia soccer final.

In the US, NFL player Russell Okung has converted half of his salary into Bitcoin through Strike, with the crypto’s 2020-21 bull run boosting his earnings; Okung noted that “so many athletes are hitting me about Bitcoin and crypto, I’m doing calls everyday,” in a Twitter post.