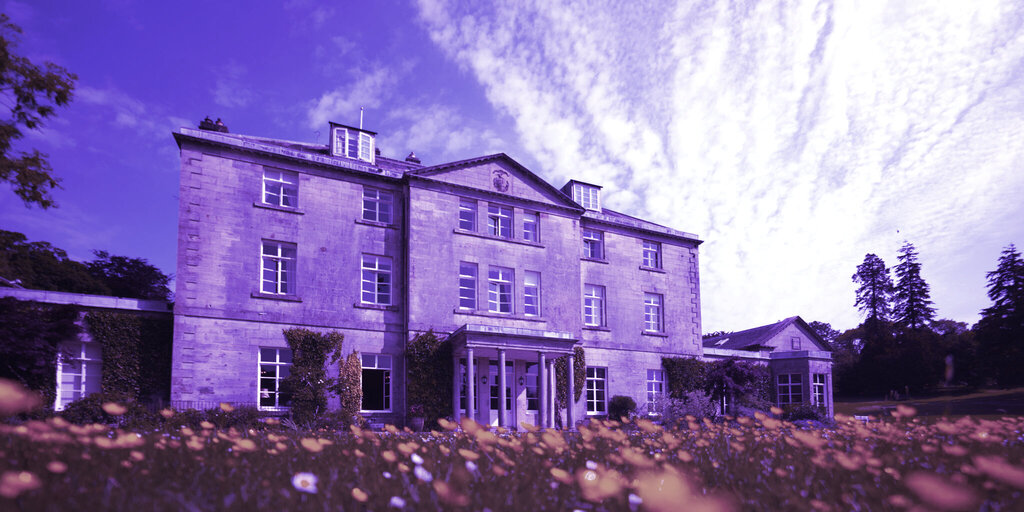 In his trailer, on the remote Shetland islands—12 hours by ferry from the Scottish mainland—Steven Elphinstone would stare at charts of Bitcoin’s price trajectory for days and nights without end, looking for clues to the cryptocurrency’s movement in the fleeting shape of the tail being made on a Viking dragon ship.

Elphinstone, 49, is a former tunnel miner and claims to have bought and lost hundreds of Bitcoin. He fuelled his passion for charting with Viking mythology, numerology, and a cocktail of drugs: cannabis, LSD, mushrooms, amphetamines, and ketamine. (With the ketamine, “I actually got transported into my chart,” he says with a degree of glee).

He’s come to talk to Decrypt fresh from his daily counseling session at Castle Craig, the world’s first rehabilitation clinic to treat cryptocurrency addiction. Therapeutic approaches to this most novel of addictions are contested—but unquestioned is a growing interest in cryptocurrency and trading, boosted by lockdown isolation and a bull market. Castle Craig therapist Tony Marini says that inquiries about admission to its crypto rehabilitation program have increased by a factor of 10 since last year.

From gambling and drugs to trading Bitcoin

Housed in a striking, eighteenth-century castle, the clinic is around 25 miles from Edinburgh, the capital of Scotland, a country that has far more drug deaths per capita than any other in Europe.

Marini, a dapper 56-year-old Scot of Italian heritage, is himself a recovering addict.

He got hooked on gambling, alcohol, and cocaine as a teenager, and only turned his life around 16 years ago, but not before he was pulled from the brink of death. Marini believes that crypto trading is very similar to gambling, and claims to be the first therapist to recognize the pattern; the journey to addiction goes from occasional trades and frequent wins—which feed a dopamine craving and lead to fantasies of big wins—through to prolonged losing episodes, and a loss of face which results in isolation and withdrawal. Eventually, addiction may lead to illegal acts, disaster, and sometimes even suicide.

“If you say to somebody doing crypto, ‘so you’re occasionally gambling,’ they’re gonna go ‘no, I’m not.’ So take out the word gambling and say ‘occasionally trading,’ he says, in order to make his point about the similarities between the two.

“Commonly, people start because they want to buy stuff off the dark web. And the only way to do that is with cryptocurrency.”

We sit on a windswept bench while he describes a former client who was in finance and started trading Bitcoin in 2010. He got the bug and diversified into other cryptocurrencies. But he began to lose money and ended up embezzling over £1 million ($1.3 million) of his company’s money.

“Commonly, people start because they want to buy stuff off the dark web. And the only way to do that is with cryptocurrency,” says Marini. “The biggest problem is this cross addiction [with crypto] starting—through drugs and alcohol.”

Since 2017, Marini’s treated 15 clients for crypto addiction alone. He says more commonly people are referred to Castle Craig because of drug or alcohol addiction and then “their treatment often uncovers other behavioral obsessions, and foremost among these is crypto addiction.”

Eight or nine of the 50 clients currently at the clinic fall into this category. Typically they have “a bit of spare cash,” and are aged between 20 and 45, he estimates as we’re walking through Castle Craig’s extensive grounds.

We stride past llamas and a friendly pig. Branching out in all directions are tree-lined paths with glorious sweeping views of the countryside, and numerous outbuildings—the castle’s former servants’ quarters—where clients are housed. Finally, we come to the small smoking Pavillion, which is where quite a few of them appear to be.

Marini nods and smiles at them. Nicotine and caffeine are pretty much the only drugs Castle Craig’s residents are allowed—even their mobile phone use is strictly limited to two hours a week.

“They’re constantly on the phone, on their laptop, on the computer, whatever… watching the prices of these [cryptocurrencies] going up and down. And it’s almost a withdrawal when you take that phone off them or the computer; they get anxiety, palm sweats, and panic attacks,” says Marini.

Castle Craig claims to be the only center to treat cryptocurrency addiction between 2017 and 2019. People come not only from Scotland and the rest of the UK, but from as far afield as the U.S., Dubai, Malta, Ireland, and the Netherlands.

Treatment is not cheap. But Elphinstone’s six-month rehab has been funded by the British National Health Service.

“I firmly believe that a 12-step program should absolutely exist for cryptocurrency addiction.”

He’s on his 58th day and is following a plan based on the 12-step program most famously used by Alcoholics Anonymous (AA). The plan is known as the Minnesota Model and is commonly used to treat many addictions.

“I firmly believe that a 12-step program should absolutely exist for cryptocurrency addiction,” says Elphinstone, who jokingly refers to Castle Craig as “Crypto Castle.”

But his therapists dictate that, before addressing his crypto obsessions, he must make progress with his drug and alcohol issues.

In 1971, oil was discovered in the North Sea off the coast of Shetland. In the seventies, these fields were among the most productive in the UK and attracted thousands of temporary workers, together with Elphinstone’s father. “I’m an oil industry baby,” he says, and, alluding to a history of alcoholism in his family, “a generational addiction trauma type person.”

Elphinstone left Shetland for England, and he made good money working as a tunnel miner on big underground transport projects, which allowed him to invest.

He started with trading stocks and gold, delving into the dark web and Bitcoin in 2015. In-between tunnel-digging contracts, he lorded it up in Thailand. But after a personal trauma hit and he turned to crystal meth, his spiral of descent began in earnest.

Eventually, at the end of 2019, and the start of the recent crypto boom, Elphinstone found himself jobless, and back in the Shetlands. He became obsessed with fitting together patterns, and he often digresses from his narrative to point out the numerical significance of dates and price events. “I’m a shape analyst,” he says, as he delves into a plastic carrier bag which he says is always by his side and contains his “mama zone” staples: a newspaper, cigarettes, and chocolate.

He has no Bitcoin left, he says; in his erratic, drug-induced states of mind, he had scrawled the codes to access his cryptocurrency wallets on the walls of his trailer, without making proper records. Subsequently, he was evicted.

He claims he also stashed a hard drive, containing codes to access 20 Bitcoin, in Thailand, and it’s now lost.

But he seems cheerful about the loss, and still thinks he might figure it all out. He starts to paint a future where he’s clean but making a living as an analyst, through his Bitcoin charts…

“Insanely insane!” interjects Marini, who has quietly entered the room.

“He came in for drugs and alcohol. And he thought crypto was what he was going to go back out to,” the therapist explains later. “[But] we have to be very careful that cryptocurrency doesn’t take people back into trying to escape their difficult emotions through drugs and alcohol.”

What Marini finds most concerning is that all the stories in the media are about people who have made money: “We’re not hearing about the people that have lost lots of money. People are so ashamed. They feel so guilty. They don’t want to be talking about it. They feel stupid.”

A recent survey of people attempting to quit gambling showed that almost 40% had thought about suicide and 33% had attempted it, and, according to Marini, three times more people commit suicide as a result of gambling than any other addiction. So what should someone do if they think their crypto trading may be getting out of control? Head for somewhere that treats gambling addiction, says Marini. “The problem is that there’s not any funding out there for people to go.” Meanwhile, he added, “the gambling establishments make billions.”

But not all therapists believe that gambling, cryptocurrencies, drugs, and alcohol are so firmly inter-linked.

“Although it is, in essence, a form of gambling, however, it also isn’t,” Thailand-based addictions therapist Dylan Kerr told me via email.

Kerr’s clients range from troubled celebrities (he was the official counselor for the British rock band The Libertines while they were on tour) to burnt-out executives and crypto traders. Many of his clients live in Southeast Asia and the UK.

“One flaw I find currently is that a lot of therapists are very unfamiliar with the culture, they don’t quite get what it is.”

“Some of my clients in the past have made their income due to crypto, they are still invested in developing various software and future developments in crypto, which of course can add a layer of complication to the matter,” he says.

“One flaw I find currently is that a lot of therapists are very unfamiliar with the culture, they don’t quite get what it is,” he adds.

Crypto trading diverges from gambling (and stock trading), he explains, through characteristics including its 24-7 availability, its volatility and the huge volume of social media that readily reinforces addicts’ out-of-control tendencies.

After our conversation, Kerr puts me in touch with Dan (not his real name), a client who lives in London, works in IT, and lost all his savings when Bitcoin crashed in 2018.

Dan blames his misfortune on an addictive personality, and the cardinal newbie mistake of investing, making some big gains, and assuming the market would rise forever.

“Social media fueled some of those bad decisions,” he says. “I guess my thinking became reversed and the new logic was more like ‘I am losing out on life-changing profits by not pushing my big chips in,’” he explains via email.

FCA Chief Reminds Crypto Investors They Could ‘Lose All Their Money’

He managed to get things under control but started dabbling in margin trading in 2019. To combat the boredom and anxiety of lockdowns, he was also drinking more and smoking more weed. “I wasn’t playing with such big numbers like before, but rather smaller risk bets on leverage—in more repetitive or compulsive ways.”

Then, a family member advised him to seek help and he found a private counselor who prescribed cognitive behavioral therapy (CBT).

Rather than labeling a person an addict, as the 12-step program does, CBT aims to approach overwhelming problems by breaking them down into smaller parts and equipping addicts with strategies to cope.

Dan says he identifies with this, as “it’s a bit like a successful trading strategy.” But he confesses that “[it’s] really really hard to stay out of the market when you see the kinda moves we’ve been seeing and the profits people have been making. Some of the displays of wealth you see on Twitter—wow.”

But, with a dearth of statistics to indicate the scale of the problem, the desperation is less visible—unless, that is, you look for it amid tales of Viking longboats and irrecoverable losses at Castle Craig.