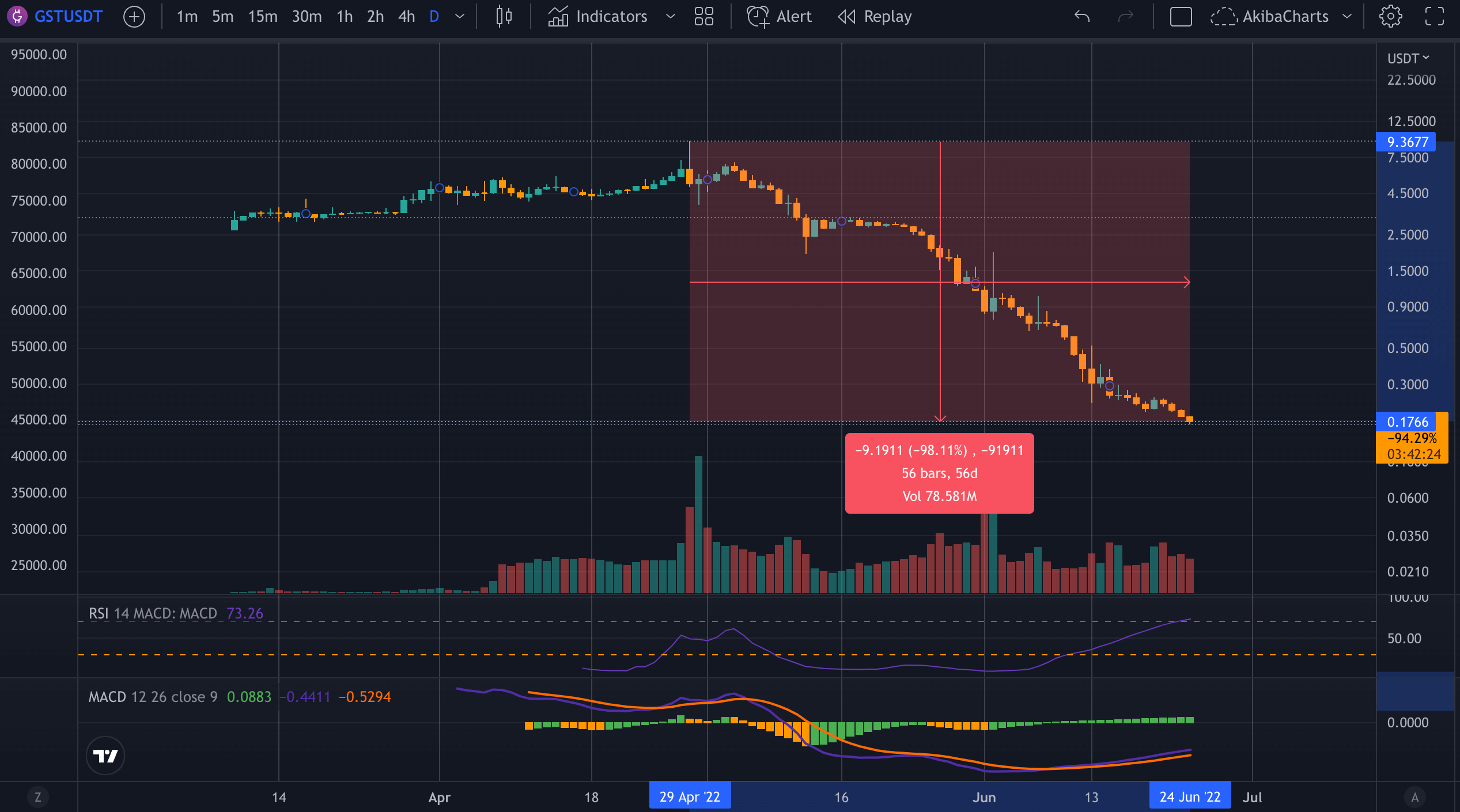 The popular move-to-earn app STEPN reportedly has over 3 million users, yet the price of its governance and reward tokens are in free fall.

Is this the end of move-to-earn or a return to the mean after an overinflated price point created by hype and hysteria?

STEPN is a mobile application that utilizes Solana and Binance Smart Chain networks. Users purchase NFT sneakers with varying rarity and traits in either $SOL or $BNB and then use them to earn cryptocurrency while moving.

The NFTs are bought in $SOL or $BNB, but the rewards come in the form of the Green Satoshi Token ($GST.) This token can be used to repair or breed your sneakers as part of the in-app gamification.

Users can also move their $GST into the in-app wallet and convert the tokens into other cryptocurrencies such as $USDC. STEPN’s revenue comes from taking a percentage of swaps and NFT purchases.

Why is STEPN failing?

The tokenomics of STEPN appear to be in trouble as both the governance and utility token are down over between 80% to 98% from their all-time highs earlier in the year. $GMT peaked at $4.19, and $GST hit $9.36 in April. However, both tokens have been trending downwards ever since and the situation looks dire. 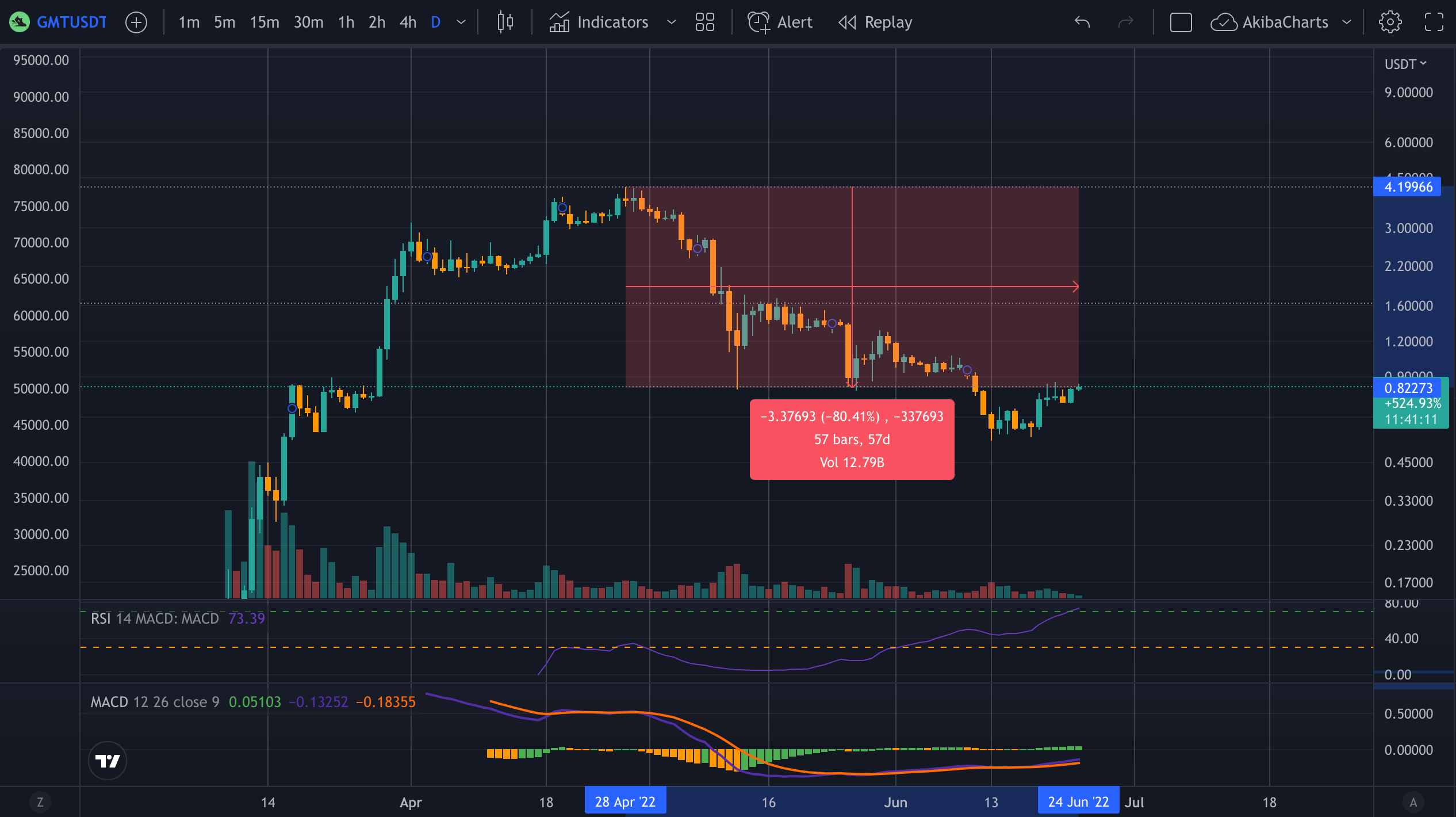 At the peak of STEPN’s popularity, users could earn hundreds of dollars from simply jogging around their neighborhood while using the move-to-earn app. At a token price of $9.36, even with the most basic sneaker, NFT daily rewards of 3-4 $GST were entirely achievable. Currently, the same walk, which would have earned users up to $37 in April, only yields $0.72.

With NFTs costing around $600 on Solana, the timeframe to get a positive ROI was approximately 16 days. As of June 24, the cheapest sneaker is about $104. At a return of just $0.72 per day, it would take investors 144 days to break even at the current price point.

STEPN also has competition in the form of Walken and Sweatcoin as the move-to-earn bug has hit the GameFi community hard. Walken’s $WLKN token was released on June 21 and is up 750% since launch. The game has similar mechanics to STEPN, using NFTs to optimize earnings.

The Sweatcoin token, $SWEAT, is scheduled for release later in 2022, with users currently earning a non-crypto version of the token. Sweatcoin has a slightly different gamification model as the app tracks users’ steps in the background, similar to an Apple Watch or FitBit.

Walken runs on the Solana blockchain and, according to Solscan, currently has 45,000 holders. Its fully diluted market cap is reported as $277 million compared to $4.9 billion for STEPN. The circulating supply for Walken has not yet been confirmed; however, one wallet owns 92% of the supply.

The distribution indicates that the circulating supply should be $22.1 million, assuming the whale wallet is the project treasury. At this supply, $WLK would have to increase 20x to reach $22 to overtake the market cap of STEPN.

Sweatcoin reports over 90 million users and claims its token launch “can be the largest crypto distribution in history.” There are already 28 billion off-chain Sweatcoins that can be used in the app to buy products, services, and discount codes. Furthermore, over 5 million non-custodial crypto wallets were generated by Sweatcoin in May alone.

While STEPN may be on the decline, there is certainly still an opportunity for the move-to-earn industry to grow and find a place within GameFi. Issues with tokenomics and in-game economy are expected with a brand new concept. In reality, earning $1 daily walking to work seems much more sustainable than $30+.

For instance, if the population of the United Kingdom all used STEPN every day, earning $30 per day, it would create $2 billion worth of tokens per month; if 50% of the world’s population did the same, it would be $90 billion. These numbers simply don’t scale; therefore, a cooling off of the price point may be beneficial to the longevity of STEPN and the move-to-earn genre in general.

2022-06-24
Previous Post: Powell: Congress to Receive Guidance from Federal Reserve on CBDC
Next Post: Biggest Movers:  XRP up by Nearly 15%, as AVAX Climbs to 12-Day High on Friday