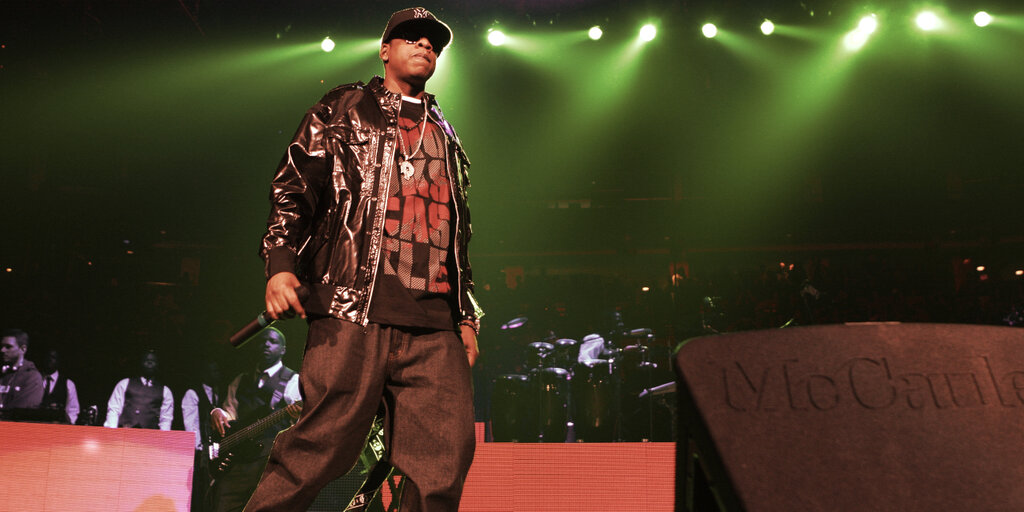 In the wake of Square’s acquisition of Tidal, Jay-Z joined Jack Dorsey in a Twitter Space for a far-reaching conversation about finance, tech, and crypto’s potential for artists.

“If you look at someone like Basquiat, who made a painting in ‘83 that was bought for $2,500 and then sold for $10,000, and then recently sold for $110 million,” said Jay, referencing Jean-Michel Basquiat’s Untitled. “His family and no one involved seeing any sort of profit from that. And I just don’t think that’s right.”

Untitled, painted in 1982, was initially purchased for just $19,000; when the collectors’ family listed it in 2017, Untitled became the most expensive American artwork ever sold at auction.

Jay went on to talk about how smart contracts allow for revenue splits in perpetuity—something NFT artists are already using to divide up profits through code, as opposed to a trusted middleman: “With these blockchains and these smart contracts, you can write the contract today to say, any sale that happens, I want to receive 10% or 30%. Or you can write it out: 50% on the first one, 40% on the next. It’s so many creative ways you can participate, and let others participate. And it’s recorded there, so it’s very transparent, there’s no hiding behind any fancy words, and lawyers et cetera.”

Jack Dorsey, who leads both Square and Twitter, has been a fervent advocate for blockchain technology. “Whatever my companies can do to make [Bitcoin] accessible to everyone is how I’m going to spend the rest of my life,” Dorsey explained at the Bitcoin conference in Miami earlier this month. “If I were not at Square or Twitter, I would be working on Bitcoin. If it needed more help than Square or Twitter, I would leave them for Bitcoin.”

Square purchased $50 million in Bitcoin for its treasury last year. The company also released a disputed report downplaying the environmental repercussions of crypto mining, and said it has no plans to slow its crypto investments.

Crypto has been creeping slowly but surely into the music industry over the past few years—a process that’s been significantly expedited by NFTs, the crypto collectibles that generated huge profits for musicians earlier this year. Kings of Leon dabbled in the NFT market, as did Aphex Twin, Grimes, Yaeji, Azealia Banks, and Holly Herndon.

Jay-Z recently announced an NFT auction tied to the 25th anniversary of his debut album, Reasonable Doubt; Roc-A-Fella Records, the label he co-founded, recently sued another co-founder to stop him from doing the same.

“The spirit of what NFTs represent, the spirit of just looking critically at how artists are compensated, and of proving that, is something that we want to spend a lot of time and a lot of our focus on going forward,” said Dorsey in today’s Twitter Space.

Experiments around new models for owning music with crypto, like Songcamp, Catalog, and the Song That Owns Itself, have also been gaining traction. The blockchain-based streaming service Audius recently said it’s amassed over four million monthly active users.

“I’m pro-artist and I have always been, since the beginning,” Jay told Dorsey. “And anything that benefits the relationship between people that consume art and love art and people that are making it, that’s what I’m interested in.”