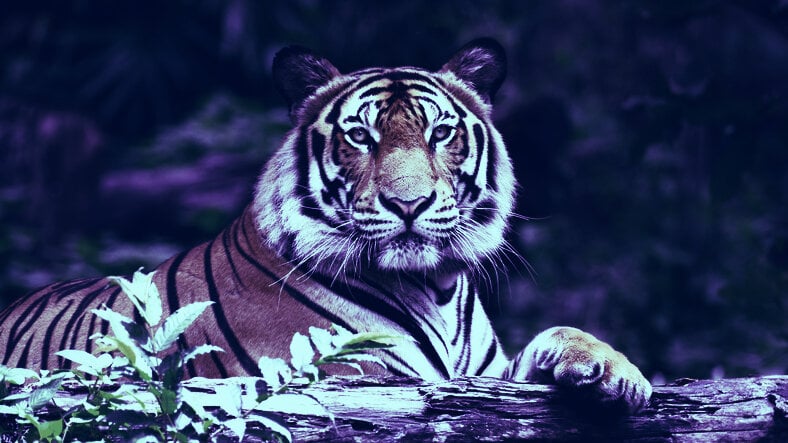 In 2020, Netflix’s Tiger King introduced the world to Joe Exotic, documenting his wild life as a tiger breeder and his rivalry with local animal rights activist Carole Baskin.

Now he’s two years into a 22-year prison sentence for a failed assassination attempt against Baskin, as well as 17 federal wildlife violations, including killing a tiger at his zoo in Oklahoma.

All other options exhausted, Exotic, real-name Joseph Maldonado-Passage, has sought the help of the crypto market to save wild animals and get him out of jail. About $200,000 worth of his coin, launched earlier this month, trades on Uniswap and 1inch each day.

“We will never let Carole win! Find your inner Tiger as Joe, $TKING, and his legal team stage the comeback of the century! We will land the first tiger on the moon to free Joe! Team Joe for the win!,” a statement on his website reads.

Exotic plans to add NFTs, and intends to use proceeds to pay his lawyers and rescue more tigers.

Baskin, in turn, has minted her own token, CAT, which trades on Rally, an Ethereum-based social token network.

Her motivations are very different: she is concerned about the profligacy of the Federal Reserve. “At least Bitcoin and other altcoins have scarcity built in and now there is much more broad adoption of them in our everyday lives.”

Like a lot of other meme tokens, TKING is a deflationary token. Each transaction has a burn rate of 2%.

While the developers said they burned 35% of the coin’s total supply of 1 trillion tokens, they actually sent it to the wallet of Ethereum co-founder Vitalik Buterin—a common trope for meme coins. Buterin has asked developers not to do this and donated billions of dollars of dumped coins from other projects to charity.

Both TKING and CAT have pretty much flatlined since launch. May the feud between Baskin and Exotic continue.