According to the latest report from CoinShares, the rebound seen in digital asset fund inflows spells good news for the industry as it indicates the market might be entering a bullish period.

However, the significant improvement seen in digital asset fund inflows wasn’t driven by Bitcoin. CoinShares noted that the recovery has been predominantly due to improved sentiment in altcoins, despite Bitcoin still holding the largest part of the market.

Bitcoin saw outflows for 14 out of the past 16 weeks, with $650 million worth of the cryptocurrency being taken out of digital asset funds. However, despite 8 consecutive weeks of outflows, this still remains a relatively small amount relative to the total assets under management (AuM) of $38 billion and year-to-date inflows of $4.1 billion.

On the other hand, looking at Ethereum digital asset funds paints a much more bullish picture, as ETH saw outflows only 7 out of the last 16 weeks. Its 25% market share has remained stable for the better part of the year. 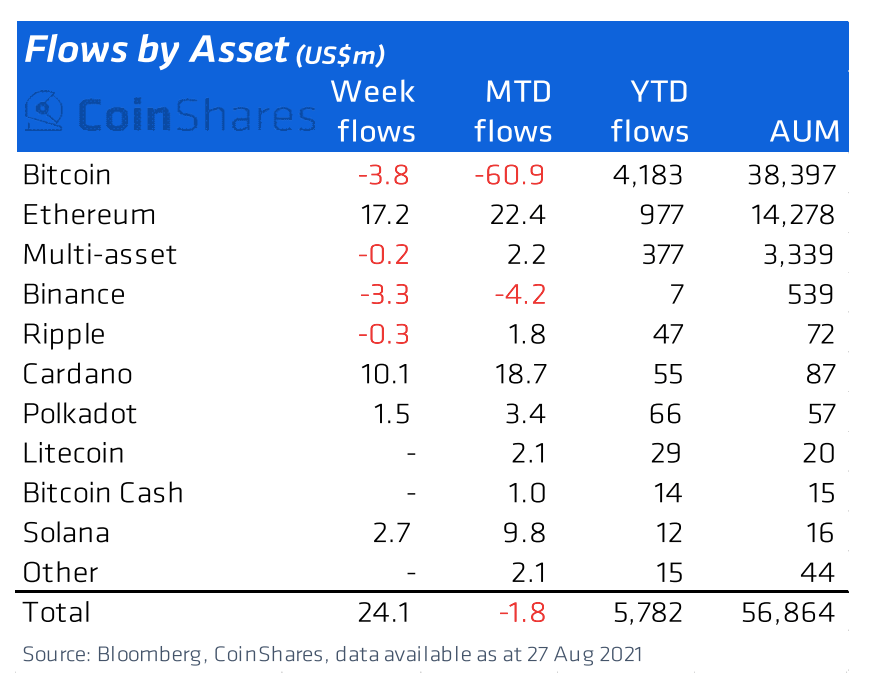 Last week’s best performer, however, was Cardano, which saw inflows of over $10 million. This is the largest inflow of capital Cardano funds have ever seen, which has brought its market share to 0.15%.

Close competitors Solana and Polkadot both saw inflows this past week, with $2.7 million flowing into Solana and $1.5 million going into Polkadot. The fresh capital enabled Solana to overtake Bitcoin Cash’s AuM, which now totals $15.7 million.

CoinShares noted that the significant rise in inflows now means that altcoins now represent 32% of the total digital asset AuM. This surpasses the highs the market has seen in January 2018, when altcoins represented 30% of the digital asset AuM and is inching close to the 35% record set in mid-May this year.