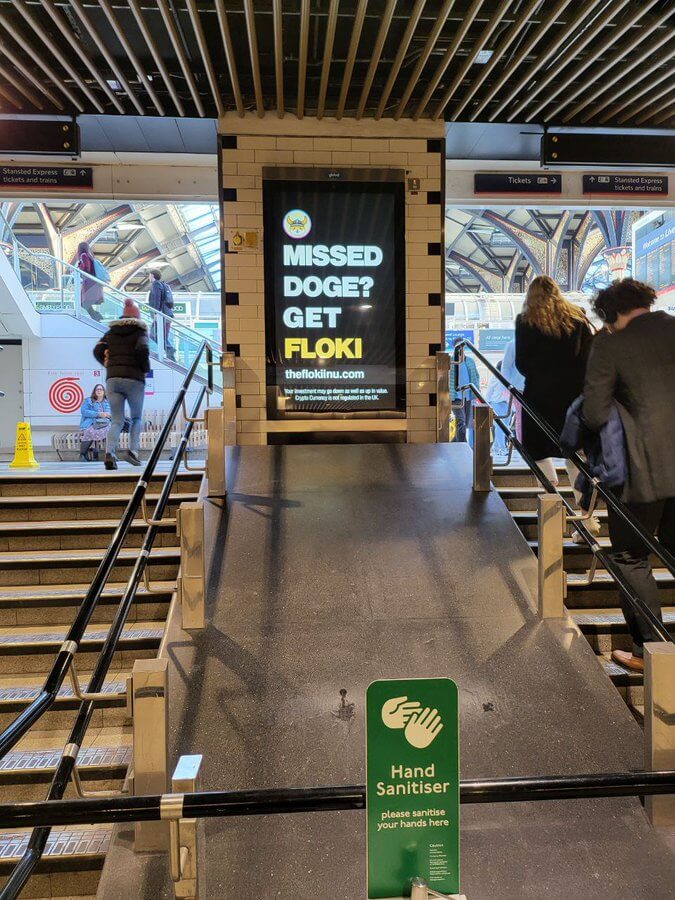 Although doggy-inspired meme coins are generally viewed with suspicion, the recent success of Shiba Inu demonstrates investor appetite for them exists.

However, not all Dogecoin clones are equal. Shiba Inu’s success is partly down to its developing ecosystem, including a DEX, NFTs, staking, and supporting tokens in $LEASH and $BONE, which are live and operational right now.

With Floki Inu lacking similar functionality, are the people behind it wasting their advertising spend?

Is Floki Inu the next Dogecoin?

Dogecoin’s monumental rise earlier this year saw it post +15,000% gains in the five months to May. For that reason, it’s understandable that people are looking to copy the original.

At present, there’s no shortage of doggy-themed tokens being launched, including the newest kid on the block, FlokiGravity, up 290,000% today. Or Baby Floki Billionaire, which is relatively more established, having started on Binance Smart Chain on October 3, making a 1,300% run-up from launch to its all-time high on Saturday.

Rightly or wrongly, as eluded to above, a significant aspect of their appeal is the millionaire-making potential they are seen to have.

Keen to cash in, the team behind Floki posted a tweet on October 6 promoting their advertising campaign. It centers around the tagline “Missed Doge? Get Floki.”

This is indicative of our plan to make the $FLOKI brand one of the most familiar brands in London and the UK!

FLOKI ads will also be going live on 300 buses in London soon!”

Having spoken to the marketing team, the FT says the campaign aims to legitimize Floki Inu in the general public’s eyes.

A representative by the pseudo name “Sabre” said they are looking to inspire confidence in the brand. He/she feels it’s necessary to separate Floki Inu from the many scam projects that exist in the cryptoverse.

“These advertising campaigns will run together and will be a full out assault of the London public transportation system.”

Similar advertising campaigns are set for rollout in Los Angeles and Japan, China, and Russia.

While Sabre said the current campaign is looking at instilling trust in the brand, the FT noted that questions on who is behind Floki Inu remain unanswered.

“Floki Inu did not respond to a Financial Times request for comment on which individuals or corporate entities are in control of the project.”

According to its whitepaper, devs envision three main projects, those being an NFT gaming metaverse, an NFT marketplace, and an educational platform.

Not only are these projects not listed individually on its roadmap, but based on what it has “ticked off,” it’s clear Floki Inu is a long way from achieving its whitepaper goals.