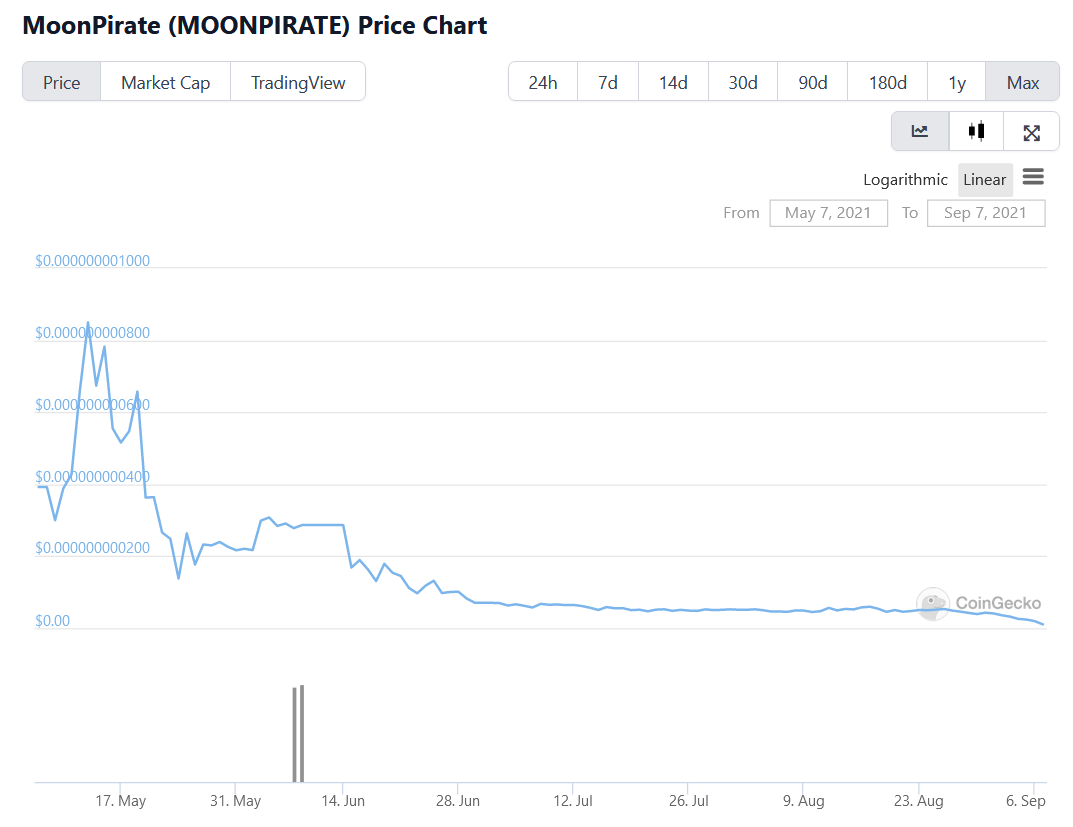 MoonPirate collapses less than half a year after launching on the Binance Smart Chain (BSC), leaving many to question if it was a thinly veiled scam from the start. Given the history of dodgy projects on the BSC, this latest incident does little to dispel such associations.

Nonetheless, the MoonPirate team has responded, saying the project is untenable, having suffered “repuation damage.”

“Many of us have done our best to try and keep this going however our efforts have failed. We have suffered huge reputation damage and this is one of the main reasons for this decision.”

Although the response didn’t detail the circumstances of the “reputation damage,” further digging reveals a farcical turn of events.

MoonPirate was the first crypto project to focus on alcoholic and energy drinks. It partnered with a distillery to track the beverages on the blockchain using NFTs.

Per its now-defunct website, the project launched on April 16, but it wasn’t until May 7 that the $MOONPIRATE token became available for trading.

Soon after going live on PancakeSwap, $MOONPIRATE hit a peak of $0.000000000850 on May 13. Since then, it’s been downhill for the project, with today’s announcement being the final nail.

The end of the journey

A Medium post from “Captain Shaun” and the team opened by saying they “need to put a close on this chapter and end this today.”

They added that they too have suffered financial loss, and not for people to think they’ve walked away from MoonPirate “in profit.”

“We want every investor to understand that we are also in the same situation as you, many of us have invested a lot in this project and made huge losses so please do not think that we have come to this decision lightly or that we are walking away in profit.”

The post also mentioned Nok’s decision to terminate their partnership, which forced the project to close. Nok is the distillery that makes their product.

Just four days ago, a long post from “Captain MoonPirate” detailed his departure from the project. It mentioned “Captain Chris” is now tasked with taking MoonPirate forward, to which he has received 30 BNB ($14,000) to make that happen.

“Remember, I have given Chris 30 BNB worth of MoonPirate tokens as mentiond above and he will use these to rebuild the team, so feel free to reach out to Chris if you have good ideas or want to join the team.”

However, a tweet on Sunday revealed Captain Chris did a runner with those funds, leaving the project high and dry.

To have a say in the future of MP, please visit our Telegram:https://t.co/KLfBdZ86km

This TG is currently muted for a vote from current team (minus Chris).

Current leader Captain Shaun likened the BSC space to the Wild West. But stresses that he and the team tried to make it work, more importantly, it was never a scam—just a project plagued with poor decision-making and unfortunate events.

The post MoonPirate responds to accusations it is just another Binance Smart Chain “rug pull” appeared first on CryptoSlate.