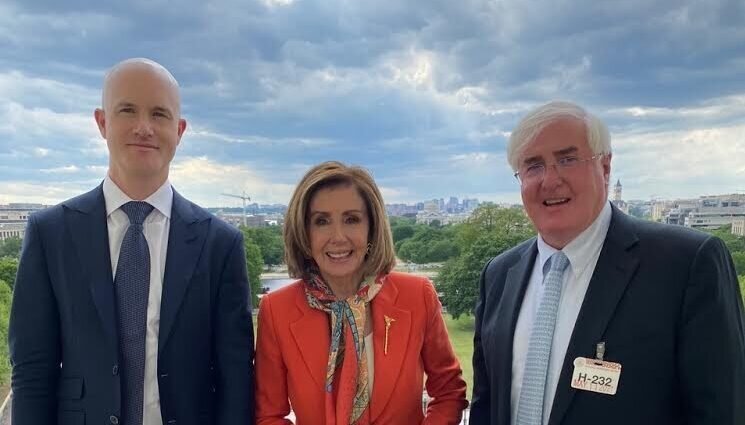 Coinbase founder Brian Armstrong has never had much luck in Washington—few Silicon Valley’s entrepreneurs do. Nor has Armstrong, an introvert and businessman, ever enjoyed his time there.

But courting politicians is a worthwhile endeavor if your business model undermines them, so Armstrong has once again hoofed it to the Capitol to spread the gospel of Bitcoin and Coinbase, and clamor for regulatory clarity.

He spent the week in DC schmoozing with members of Congress and heads of federal agencies, with early investor Ron Conway, board member Katie Haun and head of legal Paul Grewal in tow.

“Goal was to establish relationships and help answer questions about crypto,” tweeted Armstrong in a public de-briefing today.

“The reactions ranged from very positive (those who see enormous potential) like @SenatorSinema and @PatrickMcHenry, to admitted skeptics who asked thoughtful questions about illicit activity and I think left with a much more open mind like @MarkWarner, and everyone in between,” he said.

Armstrong then bemoaned the lack of regulatory clarity in the U.S., which he attributes to the broadness of the crypto industry.

Coinbase quickly became the center of crypto when it opened in 2012. It was the main gateway for Bitcoin trading and amassed a million users within two years.

In the nine years since Armstrong founded the company, crypto has advanced so fast that regulators have struggled to define it. Some cryptocurrencies are securities, others currencies or property, and yet more still escape classification, said Armstrong.

“So it’s a bit of a jump ball across existing federal regulators, and this means fewer startups who are able to brave the legal uncertainty. Some of them wind up founding their companies abroad, or not at all. This is a major problem.”

Armstrong’s solution? “The U.S. could really use a safe harbor/sandbox for crypto startups to get off the ground, before having to grapple with these issues. This would go a long way, and give the SEC/CFTC/Treasury/etc a common framework to follow.”

This is not a new idea. The U.S. Securities and Exchange Commission’s crypto-friendly commissioner, Hester Peirce, has long called for a safe harbor that would keep regulators from pouncing on crypto companies for securities fraud. The idea is that such companies would use the time to decentralize. Peirce told Decrypt last year that a safe harbor was a long shot given the slow speed at which large regulatory bodies adapt to new technology.

But Armstrong says that regulation can’t come soon enough. “The U.S. is at a critical juncture in making holistic decisions around cryptocurrency. Imagine the U.S. without the internet,” he tweeted.

Armstrong explained to regulators how China is way ahead of the pack when it comes to central bank digital currencies (CBDCs). China is piloting its digital yuan in several provinces.

“It is real, they are moving quickly on it, and I believe it represents a threat to U.S. reserve currency status long term if the U.S. doesn’t move quickly to create their own,” he said. The Fed hasn’t yet concluded whether a CBDC is the way to go.

If nothing else, Armstrong would at least like “a signal from the current administration that crypto companies are welcome in the U.S.” That “would go a long way,” he said.