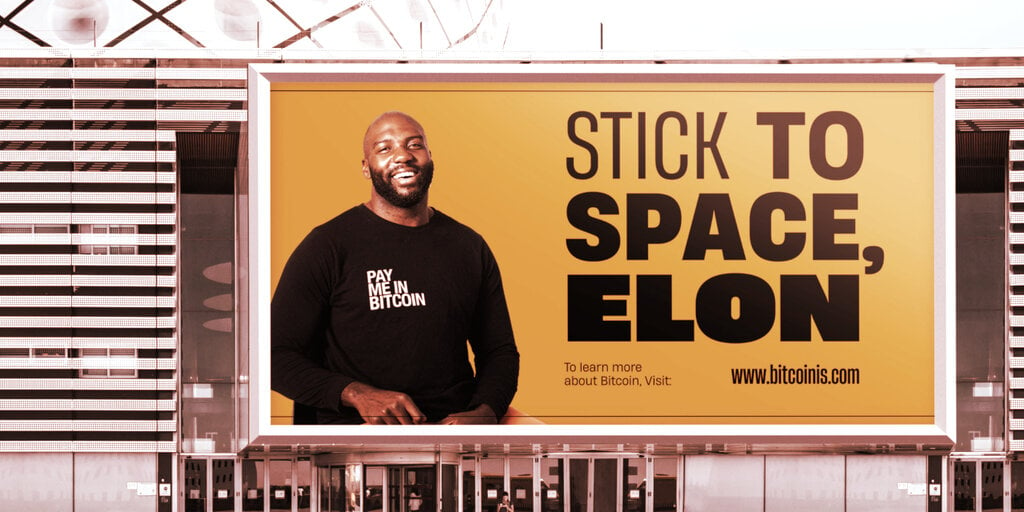 Carolina Panthers left tackle Russell Okung is an accomplished NFL veteran with 11 seasons under his belt, a Super Bowl win, and two Pro Bowl selections. But over the last couple years, he has become almost as well known as a Bitcoin aficionado, reportedly converting half of his NFL salary into the leading cryptocurrency and launching a “Bitcoin is_” educational campaign.

Now, Okung is setting his sights on a perceived opponent of Bitcoin and taking his BTC advocacy to new heights—thanks to physical billboards.

Today, in a riff on the common “stick to sports” critique often waged against professional athletes who engage in social commentary, Okung announced the launch of his “Stick to Space, Elon” campaign, which is meant to push back against SpaceX and Tesla CEO Elon Musk’s claims about Bitcoin and the environment in recent weeks.

The campaign will feature billboards in Miami, Florida beginning tomorrow, ahead of the start of this weekend’s Bitcoin 2021 conference, along with mobile billboards near SpaceX’s launch facility in Brownsville, Texas and Tesla’s facility in Santa Clara, California.

Each billboard will feature an image of Okung along with the message, “Stick to Space, Elon.” The two-week campaign will also include an online component. According to a press release, the billboards are “meant to provide a gentle reminder to the public that Musk has been around Bitcoin for only a few months and is not an authority in this domain.”

“Bitcoin is humanity’s best shot at freedom. The public narrative needed correction as Elon apparently misunderstands its true benefit to our species,” Okung told Decrypt via email. “No individual is a threat to Bitcoin in the grand scheme of things. In Elon’s words, it is inevitable. His impact on Bitcoin is temporary.”

The FUD coming down from Wall Street against Bitcoin will not last.

The essence of any peaceful revolution is a collapse in the system of beliefs the former needs to be true.

Earlier this year, Musk was seen as a leading proponent of Bitcoin, following the lead of MicroStrategy CEO Michael Saylor in buying up large sums of the cryptocurrency to hold on his company’s balance sheet. In February, Tesla announced that it had purchased $1.5 billion worth of Bitcoin, and would also accept BTC as payment for its electric cars. Bitcoin’s price soared following the announcement.

Last month, however, Musk changed his tune. He tweeted that Tesla would no longer accept Bitcoin, stating that the firm was “concerned about rapidly increasing use of fossil fuels for Bitcoin mining and transactions.” Musk said that Tesla was also considering other, more energy-efficient cryptocurrencies. Bitcoin’s price sank and took the rest of the crypto market with it, while Bitcoin enthusiasts grimaced at Tesla’s due diligence process.

Since then, Musk has said he’s working with Dogecoin developers to help advance that meme-based cryptocurrency, and spoke with North American Bitcoin miners alongside Saylor. Some of the region’s mining firms have formed a Bitcoin Mining Council with plans to improve reporting of their energy usage and aim to convince international miners to follow suit. As of this writing, Bitcoin’s price is still more than 41% off of its all-time high set in April.

The Bitcoin network’s energy consumption has long been a controversial subject. Digiconomist estimates that its energy-intensive proof-of-work consensus model, which requires high-powered computers to solve equations to earn BTC rewards, uses about as much total power as the country of Pakistan. Bitcoin defenders claim that renewable energy is increasingly being used to power mining, however. For his part, Okung believes that Musk’s “declarations are simply false,” according to a press release.

Okung has been one of the most outspoken NFL athletes on Bitcoin, not only converting half of his 2020 base salary of $13 million—reportedly $6.5 million—but also supporting efforts such as the recent Bitcoin-branded car at the Indianapolis 500. Other players have since followed his lead in investing in cryptocurrency. NFL player Sean Culkin announced in April that he would convert his entire salary into Bitcoin, while seven-time Super Bowl champion Tom Brady recently confirmed that he holds undisclosed cryptocurrencies.