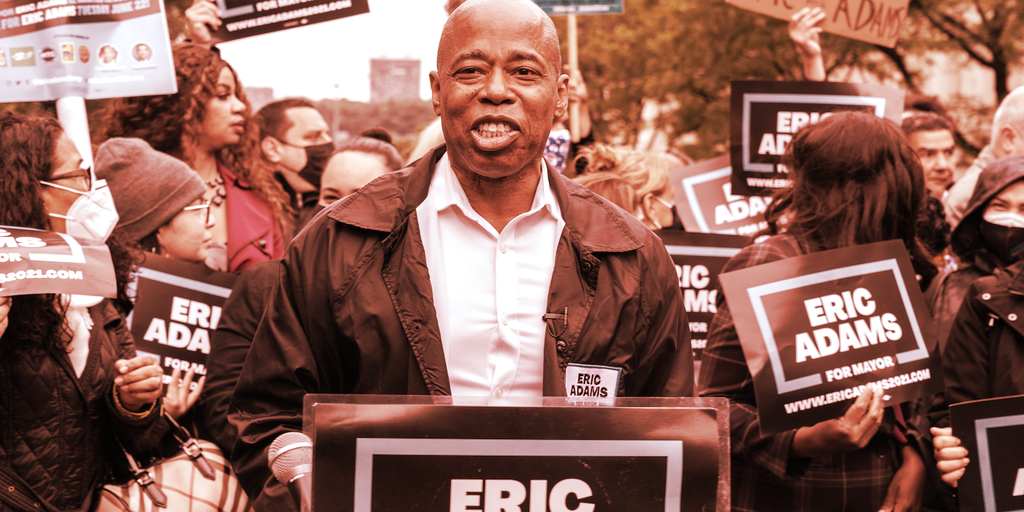 Democrat Eric Adams won election Tuesday as the next mayor of New York City, and he’s already leaning into campaign promises about embracing cryptocurrency once he takes office. One part of that, it appears, is being paid in Bitcoin.

“In New York we always go big, so I’m going to take my first THREE paychecks in Bitcoin when I become mayor,” Adams tweeted this afternoon. “NYC is going to be the center of the cryptocurrency industry and other fast-growing, innovative industries! Just wait!”

Adams tweeted in response to Miami’s newly re-elected mayor Francis Suarez, who tweeted earlier this week that he would “take my next paycheck 100% in Bitcoin.” Suarez was replying to a tweeted challenge from crypto podcaster and personality Anthony Pompliano about which U.S. politician would be the first to accept his or her salary in the leading cryptocurrency.

In New York we always go big, so I’m going to take my first THREE paychecks in Bitcoin when I become mayor. NYC is going to be the center of the cryptocurrency industry and other fast-growing, innovative industries! Just wait!

“Touché,” Suarez tweeted to Adams today. “Congrats on the election and I look forward to the friendly competition in making our respective cities a crypto capital!”

It’s currently unclear whether the City of New York can pay Adams directly in Bitcoin. When professional athletes have claimed to accept their own salaries in Bitcoin, as seen with NFL players like Russell Okung and Sean Culkin, it has actually been in partnership with mobile payments app Strike. Essentially, the teams still paid their respective players in U.S. dollars, and then each converted the amount into Bitcoin using Strike’s service.

That appears to be what Mayor Suarez will do in Miami. Mike Sarasti, Miami’s chief innovation officer, tweeted that he sent the Strike onboarding to Suarez, and that he himself had already tested the functionality. “My experience receiving a portion of my pay last week went flawlessly,” Sarasti tweeted.

There may be more to the idea of a friendly rivalry between New York City and Miami in regards to cultivating crypto and blockchain industries within their respective cities.

Ndamukong Suh: I Should’ve Spent My NFL Riches on Bitcoin

On Wednesday, Adams told Bloomberg that he aims to launch a CityCoin cryptocurrency for New York City, following the lead of Miami with its branded MiamiCoin. CityCoin tweeted last week that MiamiCoin has generated nearly $20 million in revenue for Miami since launching in August.