Op-ed: The myth of cryptocurrency crime 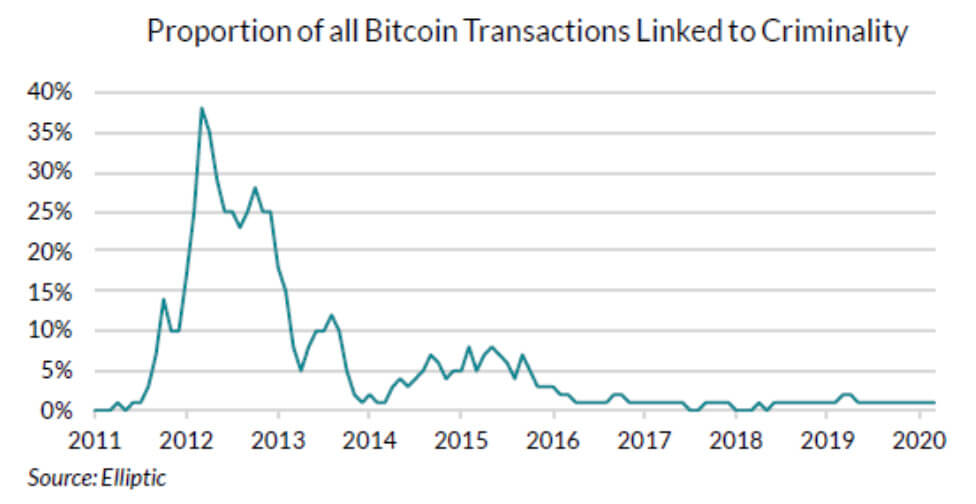 One of the most pernicious myths about crypto is that they are widely adopted for criminal use.

This idea has been perpetuated by policymakers and businesspersons alike, from JPMorgan CEO Jamie Dimon, who claimed Bitcoin was only for use by “criminals and North Koreans”, to European Central Bank President Christine Lagarde who said Bitcoin facilitates “some funny business and some interesting and totally reprehensible money-laundering activity.”

It is also slowly manifesting into public policy. Just this past month, the Biden administration announced as part of an anti-corruption campaign the DOJ’s plans to “focus specifically on complex investigations and prosecutions of criminal misuses of cryptocurrency” through a newly established National Cryptocurrency Enforcement Team.

Evidence to the contrary

Yet, this hysteria around this belief is unfounded. Actual usage of cryptocurrencies for criminal activity has represented a small proportion of total usage.

A report by Elliptics shows that Bitcoin transactions account for less than 1% of all digital transactions in 2020, a drastic reduction from 2012 when 35-40% of cryptoasset transactions were illicit.

Proportion of all Bitcoin Transactions Linked to Criminality

The narrative that crypto serves the deepest recesses of the world of organized crime continues to crumble when we break down that data even further. The majority of crypto used for “illicit means” were in financial scams – not terrorism, human trafficking or drugs. 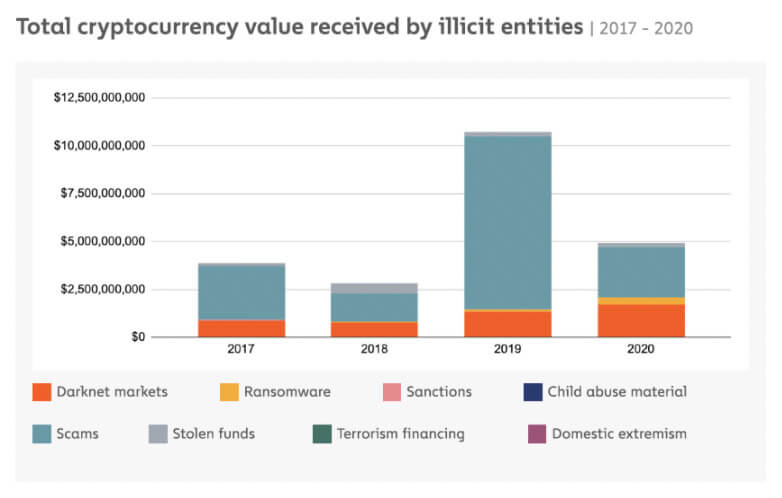 For all the public frenzy around the use of crypto for crime, it is the height of irony that government-issued fiat currencies hold up poorly themselves in contrast. The UN estimates that annual money laundering ranges between $800 billion to $2 trillion. If $10 billion of crypto is used for criminal activity, this means that about 80 to 200 times more money is laundered in fiat than in cryptocurrencies. Note too that this only includes money laundering, making the actual amount of fiat used for criminal activity far higher.

In short, the ones perpetuating this falsehood in the face of overwhelming evidence are the ones themselves who deal in high volumes of fiat – the central bankers and traditional world of finance.

Blockchains do not provide anonymity

Where does this popular misconception stem from? The most intuitive reason is probably that cryptocurrencies are not issued or regulated by governments. Coupled with the intangible nature of digital assets that exist only on the Internet, it is understandable why many get the impression that they therefore must be easily exploitable for non-legal purposes.

Yet, anyone who is familiar with how blockchains function would immediately know this to be naive. The fundamental nature of blockchains (like Bitcoin or Ethereum) is public. Contained in the public ledger are data of thousands of incoming transactions on a daily basis which are verified and rejected by thousands of blockchain validators i.e., miners. Therefore, every transaction in a cryptocurrency is attached to a wallet address that is recorded on a public blockchain, leaving a visible trail for anyone to follow, which can then be used to deduce the person’s identity.

Cryptocurrencies are in fact, highly unsuitable for illegal use. Criminals want their money to be untrackable, which is what gives money-laundering its purpose. But the public and decentralised nature of blockchains like Bitcoin is the exact opposite of that.

Even the US Department of Justice themselves acknowledge this:

“Cryptocurrency… provides law enforcement with an exceptional tracing tool: the blockchain. While the blockchain’s historical ledger will not list the names of parties to transactions, it provides investigators with ample information about how, when, and how much cryptocurrency is being transferred. Moreover, this information is publicly available; no subpoenas or warrants are required to obtain it.”

Yet, detractors may further point to privacy-oriented wallets like Wasabi Wallet or cryptocurrencies such as Monero or ZCash. Such tools and coins introduce additional mechanisms like zero-knowledge proofs, one-time use stealth addresses and ring signatures that provide greater anonymity to users by letting them shield transaction details and the wallet addresses of both sending and receiving participants.

There are a few points to note here. First, the very existence of these post-Bitcoin privacy-oriented innovations is the clearest indication that mainstream cryptocurrencies like Bitcoin are unreliable for any kind of criminal usage that seeks to retain anonymity. If Bitcoin was so easily exploitable by criminals, Monero and Zcash would lose its purpose.

One of Bitcoin’s long-time advocates Roger Ver, conceded that Monero has a big advantage over bitcoin when it comes to privacy and that one has “to be really, really careful how you use bitcoin in order to use it privately.”

Second, even though they may be theoretically better suited for crime, their usage is almost negligible. Blockchain analytics firms like Elliptic found that the proportion of illicit Bitcoin sent to such privacy wallets for money laundering purposes is low, at only 13% of all criminal proceeds in 2020 (an increase of 2% in 2019).

To get an idea of how trivial this is, let’s assume that Bitcoin’s market capitalization is USD 1 trillion. Based on Chainalysis, only approximately 1% of all Bitcoin transactions (USD 10 million) were used for crime in the same year. Taking 13% of this total adds up to a mere USD 1.3 million in Bitcoin that were funneled through privacy wallets for crime – a mere pittance in the global criminal economy.

It is hardly surprising that such privacy coins have not surpassed Bitcoin as the top choice for criminal usage. Compared to Bitcoin’s market capitalisation which ranks in the hundred billion dollar range, Monero and Zcash’s market capitalisation is far lower in the range of two to three billion. Criminal syndicates whose operations involve moving trillions of dollars are likely to avoid these cryptocurrencies by virtue of its far lower liquidity.

It’s unlikely that anti-crypto proponents will change their minds anytime soon based on the data. Repeat a lie long enough, and it begins to be accepted as truth. But no matter how one slices and dices the available data, it does not support the story they want to tell about cryptocurrency’s use for criminal activity.

The post Op-ed: The myth of cryptocurrency crime appeared first on CryptoSlate.