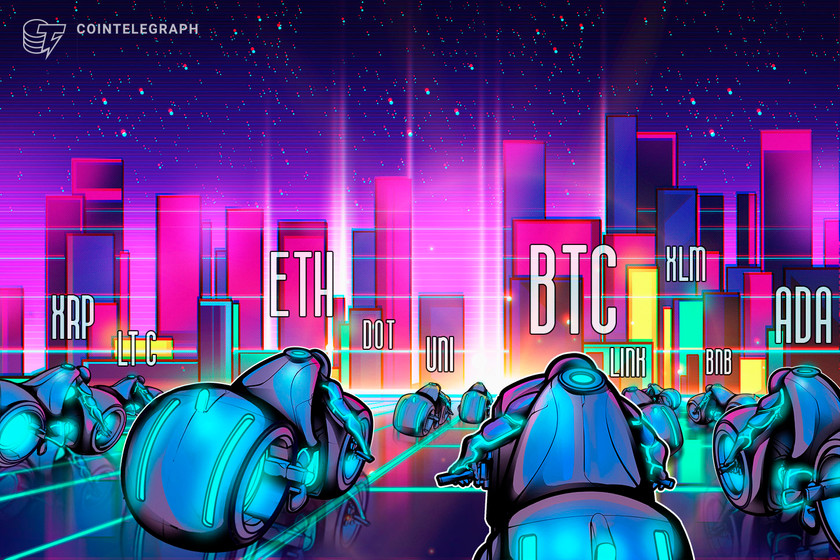 Altcoins continue to press higher while Bitcoin bulls work on holding the $60,000 level as support.

However, approval of a Bitcoin exchange-traded fund could tilt the advantage back in favor of Bitcoin. Mike Novogratz’s Galaxy Digital became the latest to file an application with the United States Securities and Exchange Commission for a Bitcoin ETF on Monday. The growing list of candidates applying to launch a Bitcoin ETF shows that there is still huge demand for the digital asset

Will Bitcoin continue to trade sideways while altcoins rally or will it resume its uptrend and lead from the front. Let’s analyze the charts of the top-10 cryptocurrencies to find out.

Bitcoin formed an inside day candlestick pattern on April 11, indicating indecision among the bulls and the bears. The bulls tried to resolve this uncertainty to the upside today by piercing the all-time high at $61,825.84, but the bears had other plans. They again successfully defended the overhead resistance.

Although the bears are defending the overhead resistance, they have not been able to sink the price further away from $60,000. This suggests the bulls are not closing their long positions in a hurry as they anticipate the uptrend to continue.

If the bulls can drive and sustain the price above $61,825.84, the BTC/USDT pair will complete a bullish inverse head and shoulders pattern. That could result in a rally to the pattern target at $69,540. If the momentum sustains, the next target to watch out for is $79,566.

This bullish view will invalidate if the pair turns down and breaks below the 50-day simple moving average ($54,7823). Such a move could signal the start of a deeper correction.

Ether (ETH) has been trading above the breakout level at $2,040.77 for the past three days, but the up-move lacks momentum. The long wick on the April 10 candlestick and the inside day candlestick pattern on April 11 suggests hesitation by the bulls to push the price higher.

If the price does not pick up momentum within the next few days, the bears will try to pull the price back below $2,040.77. If the ETH/USDT pair breaks below the 20-day exponential moving average ($1,985), the next stop could be the trendline. A break below this support could signal the start of a deeper correction.

However, the upsloping 20-day EMA and the relative strength index (RSI) above 61 indicate advantage to the bulls. If the bulls punch the price above $2,200 with force, the pair may start the next leg of the uptrend that could reach $2,618.14.

Binance Coin (BNB) is in a strong uptrend, but the up-move of the past two days is showing signs of a melt-up. The long wick on today’s candlestick suggests some traders are booking profits at higher levels.

Although the 20-day EMA ($385) is sloping up, the RSI above 84 indicates the rally is overheated in the short term. This could result in a minor correction or consolidation for the next few days. In strong uptrends, the corrections generally do not last for more than three days.

The first support on the downside is the 38.2% Fibonacci retracement level at $483.95. If the price rebounds off this support, it will suggest the sentiment remains positive and bulls are buying on dips. They will then try to resume the uptrend by pushing the price above the all-time high at $638.56.

The volatility contraction on April 9 was resolved to the upside on April 10 and XRP rallied above $1.11. The bulls continued their purchase on April 11 and pushed the price to $1.50. However, the long wick on the day’s candlestick suggests traders booked profits at higher levels.

The bears could not build up on the advantage today and start a correction. The bulls tried to resume the uptrend but failed, resulting in the formation of a Doji candlestick pattern. This suggests indecision among the bulls and the bears about the next directional move.

If the buyers can propel the price above $1.50, the XRP/USDT pair could rally to $2. Contrary to this assumption, if the price turns down and dips below $1.30, the pair could start a correction.

The bulls successfully held Cardano (ADA) above the 50-day SMA ($1.17) in the past few days and are currently attempting to start an up-move. However, the long wick on today’s candlestick suggests that buying dries up above $1.33.

If the bulls fail to sustain the price above $1.33, the aggressive bears may again try to sink the price below the 50-day SMA. If they manage to do that, the ADA/USDT pair could drop to the $1.03 to $0.98 support zone.

A rebound off this zone could keep the pair range-bound for a few more days. Alternatively, if the bears sink the price below the zone, the pair could decline to $0.80.

This negative view will invalidate if the pair sustains the price above $1.33. That could push the price to $1.48. A break above this resistance could start the next leg of the uptrend that may reach $2.

Polkadot (DOT) has been sandwiched between the 20-day EMA ($39.30) and the overhead resistance at $42.28 for the past few days. However, this tight range trading is unlikely to continue for long.

If the bulls can propel the price above $42.28, the DOT/USDT pair could rally to $46.80. The bears may again offer resistance at this level but if the bulls can overcome the barrier the pair could climb up to $53.50 and then $57.

The marginally upsloping 20-day EMA and the RSI above 54 suggest only a minor advantage to the bulls. If the bears can sink the price below the moving averages, it will open the gates for a decline to $32.50 and then $26.50.

Uniswap (UNI) has soared above the all-time high at $36.80 today. Although the moving averages are yet to turn up, the RSI has risen close to the overbought territory, indicating a pick-up in momentum.

If the bulls can sustain the price above $35.20, it will suggest strong demand at higher levels. The UNI/USDT pair could then march up to $43.43 and if this level also gets taken out, the up-move may hit $50.

Contrary to this assumption, if the bulls fail to sustain the price above $35.20, it will suggest that traders are booking profits at higher levels. If the price dips and sustains below $35.20, the range-bound action in the pair could continue.

Litecoin’s (LTC) volatility contraction on April 8 and 9 was followed by an expansion in favor of the bulls. The buyers pushed the price above $246.96 on April 10 and have successfully managed to sustain the price above it since then.

This bullish view will invalidate if the price breaks and sustains below $246.96. Such a move will suggest that traders booked profits at higher levels. The critical support to watch on the downside is the 20-day EMA.

A strong bounce off it will suggest the sentiment remains positive and the bulls will once again try to resume the uptrend. Conversely, a break below the 20-day EMA could pull the price down to $170.

Chainlink (LINK) is stuck between $24 and $36.93. The marginally rising 20-day EMA ($30.92) and the RSI above 55 suggest the bulls have a slight edge. However, the failure of the bulls to challenge the $36.93 overhead resistance indicates that demand dries up at higher levels.

The bears are currently trying to sink the price below the $32 support. If they can accomplish that, the possibility of a break below the moving averages increases. Such a move could pull the price down to $24.

Contrary to this assumption, if the price bounces off the 20-day EMA, the bulls will make one more attempt to drive the price above $36.93. If they succeed, the LINK/USDT pair could resume its uptrend and rally toward $40 and then $50.

The bulls are attempting to resume the uptrend in Stellar Lumens (XLM) but they are facing stiff resistance at the $0.60 level. The bulls pushed the price above the overhead resistance on April 11 and today but they could not sustain the breakout.

If the bulls do not allow the price to slip below $0.55, it will suggest accumulation on dips. The upsloping 20-day EMA ($0.47) and the RSI near the overbought territory suggest the bulls are in control.

A breakout and close above $0.60 will be the first sign that bulls have overpowered the bears. If that happens, the XLM/USDT pair could resume the uptrend and rally to $0.72 and then $0.85.