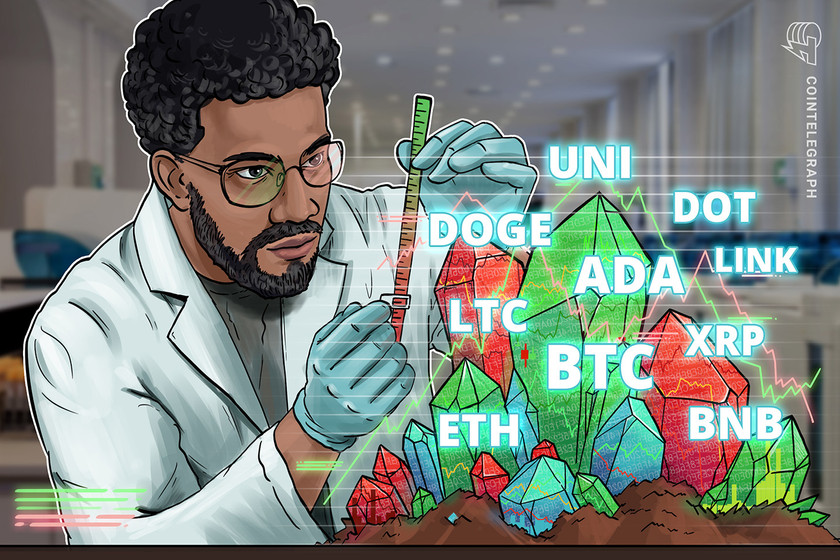 Today’s Coinbase (COIN) listing is likely to remain a focal point that will dictate the short-term price action in Bitcoin and altcoins.

PlanB, the analyst behind the popular stock-to-flow price model for Bitcoin, cited the monthly Relative Strength Index (RSI) indicator and said that the current reading of above 92 is high but falls short of the 95 levels hit in the previous bull markets of 2017, 2013 and 2011.

According to PlanB’s calculation, Bitcoin’s price would have to rise to $92,000 by the end of April to push the RSI to 95.

Traders will keep a close watch on the price action in COIN and that is likely to determine the short-term sentiment. Let’s study the charts of the top-10 cryptocurrencies to identify the critical support and resistance levels.

Bitcoin broke above the stiff overhead resistance at $61,825.84 on April 13, indicating the resumption of the uptrend. The sharp rally also completed the breakout from the inverse head and shoulders pattern that has a target objective at $69,540.

The upsloping 20-day exponential moving average ($58,713) and the RSI above 63 suggest the bulls have the upper hand. However, the BTC/USDT pair is unlikely to run away vertically.

Usually, after the breakout from a critical level, the price retraces and retests the level. In this case, the pair could drop to $60,000. If the bulls can flip this level into support, the pair could resume its uptrend.

On the contrary, if the bears sink the price below the 20-day EMA, it could catch several aggressive bulls off guard. That could intensify the selling and the pair may even crack the 50-day simple moving average ($55,241). Such a move will increase the possibility of a deeper correction.

Ether broke above the $2,200 resistance on April 13, which resumed its uptrend. The upsloping 20-day EMA ($2,040) and the RSI above 70 suggest the path of least resistance is to the upside.

The bulls will now try to push the ETH/USDT pair toward the next target objective at $2,618.14.

Contrary to this assumption, if the pair turns down from the current level, it could drop to the 20-day EMA. If the price rebounds off this support, it will suggest that the bulls are buying on dips as they anticipate the rally to rise further.

Alternatively, a break below the 20-day EMA will suggest that traders are booking profits in a hurry. That may pull the price down to the trendline.

If the price bounces off $483.95, it will suggest the sentiment remains positive and the bulls are accumulating on dips. The buyers will try to resume the uptrend by thrusting the price above $638.56. If they succeed, the BNB/USDT pair could start its journey toward $888.70.

The Doji candlestick pattern today suggests indecision among the bulls and the bears. If this uncertainty resolves to the downside and the bears sink the price below $483.85, the pair could drop to the 20-day EMA ($417), which is likely to act as a strong support.

The strong up-move in XRP continued with a breakout above $1.50 on April 13 and reached an intraday high at $1.96 today. However, the price has reversed sharply, which suggests the bears are aggressively defending the psychological level at $2.

The first support on the downside is the 38.2% Fibonacci retracement level at $1.43. A strong rebound off this support will indicate that the sentiment remains bullish and traders are buying on dips. The bulls will then again try to resume the up-move by pushing the price above $1.96.

On the other hand, a break below $1.43 could pull the price down to the 20-day EMA ($1.05). Such a deep fall will suggest that traders are dumping their positions in a hurry, which may delay the next leg of the rally.

Cardano (ADA) pierced the $1.48 overhead resistance today and climbed to an intraday high at $1.55. However, the bulls have not been able to sustain the breakout as seen from the long wick on the candlestick.

If the price rebounds off the 20-day EMA, the bulls may make one more attempt to push the pair above the overhead resistance at $1.55. If they succeed, the pair could rally to $2.

On the contrary, if the bears sink the price below the moving averages, a drop to $1.03 is possible.

The tight range trading in Polkadot (DOT) resolved to the upside on April 13 and the bulls pushed the price above the $42.28 overhead resistance. However, the price has again dipped back below $42.28 today, indicating selling at higher levels.

On the contrary, if the price rebounds off the 20-day EMA, the bulls will again try to clear the overhead hurdle at $46.80. If they succeed, the pair could start the next leg of the uptrend that could reach $53.50 and then $57.

Uniswap (UNI) broke out to a new all-time high on April 12 but the bulls are finding it difficult to sustain the momentum. The altcoin formed an inside day candlestick pattern on April 13 and has extended its correction today.

If the price turns up from the current level and breaks above $38.16, the UNI/USDT pair could start the next leg of the uptrend. The first target on the upside is $43.43 and if this resistance is crossed, the pair could march toward the psychological mark at $50.

On the contrary, if the bears sink the price below $33, the pair could lose momentum as the bulls who bought the breakout on April 12 may rush to the exit. That could pull the price down to the 20-day EMA ($31) and keep the pair range-bound for a few more days.

Litecoin (LTC) flipped the breakout level at $246.96 into support on April 11 and 12. This reignited buying from the bulls and the altcoin resumed its uptrend on April 13. The next target objective to watch on the upside is $307.42.

The 20-day EMA ($227) is rising and the RSI is close to the overbought territory, suggesting the bulls are in command.

However, the long-legged Doji candlestick pattern today shows indecision among the bulls and the bears. If the price slips below $255, the LTC/USDT pair could drop to the $239 to $246.96 support zone.

A strong rebound off this zone will suggest the bulls are accumulating on dips while a break below it could drag the price down to the 20-day EMA.

Dogecoin (DOGE) broke above the stiff overhead resistance at $0.087 on April 13, indicating the resumption of the uptrend. The breakout has been followed by further buying today, which has propelled the price to an all-time high at $0.145.

The sharp rally of the past few days has pushed the RSI above 85, which suggests the rally is getting overheated in the short term. The bears may try to stall the up-move at $0.15. If they manage to do that, the DOGE/USDT pair could enter a minor correction or consolidation.

The first support on the downside is the 38.2% Fibonacci retracement level at $0.112. A bounce off this support will suggest strength. The bulls will then again try to resume the uptrend. If they can propel the price above $0.145, the pair could move up to $0.20.

The bulls have propelled Chainlink (LINK) above the $36.93 overhead resistance today, indicating the resumption of the uptrend. If the bulls can sustain the price above $36.93, the altcoin could continue its march toward $50.

The 20-day EMA ($32) has turned up and the RSI has risen above 65, suggesting the bulls are back in the driver’s seat.

However, if the bulls fail to sustain the price above the $36.93 level, then it will indicate aggressive selling by the bears at higher levels. That could result in a drop to the 20-day EMA. A strong rebound off this level will suggest the sentiment remains positive.

Conversely, if the bears sink the LINK/USDT pair below the 20-day EMA, it will suggest that the current breakout was a bull trap.