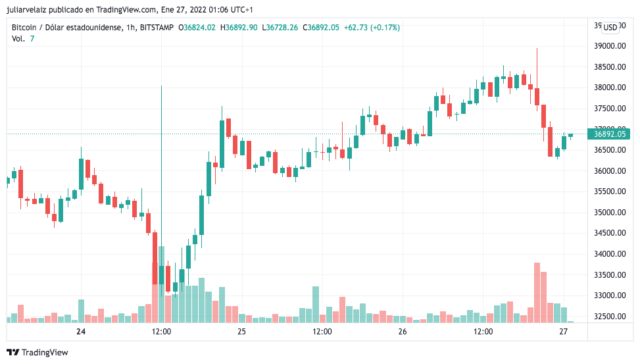 Bitcoin trading down to $36,892 after the Fed’s announcement | Source:

The Central Bank of Russia has flirted with the possibility of a crackdown on cryptocurrencies for a while. Recently, the entity moved on to propose a ban on the buying, selling, and mining of digital assets like Bitcoin.

The bank issued a report for public discussion in which they warned about alleged financial pyramids and potential bubbles in the crypto market. Reuters reported that the proposal alleged concerns about threats to financial stability, citizens’ wellbeing, and the bank’s monetary policy sovereignty.

“Potential financial stability risks associated with cryptocurrencies are much higher for emerging markets, including in Russia(…) This is due to the traditionally higher propensity for saving in foreign currency and an insufficient level of financial literacy,” the report stated.

The bank will accept proposals and opinions on the crackdown until March 1, which they claim will weigh into the final decision that will be implemented in the law.

The bank reported that active Russian crypto users have an annual transaction volume of around $5 billion.

The Ministry of Finance and leading Russian political figures criticized the bank’s hostile approach noting that a ban would negatively affect the high-tech development of the country, although they do agree on having a clear regulatory framework and many of them think crypto miners should be charged energy prices to a different rate than the rest of the population.

However, “the report of the Central Bank at this stage looks like a declaration of intent, and practice will show what specific regulatory changes it will result in,” Dmitry Kirillov, a national law firm Lidings adviser, told a local newspaper. “I sincerely hope that market players will still be able to convince the regulator of the ability of cryptocurrencies to serve the state interests as well,” he added.

Putin In Favor Of Bitcoin Mining

Russia accounts for 11.23% of all the bitcoin mining hashrate in the world, raking as the third biggest crypto-miner country according to data from Cambridge University, thus a crackdown would temporarily affect the industry.

As the debate intensifies, the positions that favor bitcoin activity are relevant for the tumbling crypto market. President Vladimir Putin argued during a video conference that Russia has competitive advantages “especially in the field of [crypto] mining”, noting the country’s “well-trained personnel” and surplus of electricity.

The Russian head of state chose an open approach to the industry and asked the Russian government and the Central Bank “to come to some kind of unanimous opinion and report on the results that will be achieved.”

“The Central Bank has its own position and it is connected with the fact that, according to experts of the Central Bank, the expansion of this type of activity carries certain risks, primarily for the citizens of the country,”

While Putin agrees cryptocurrencies possess certain risks to users, he called for the agencies to not neglect the advantages the ecosystem offers to the country. Regulations, not bans, seems to be the general approach from the leading politicians in Russia.

Bitcoin trading down to $36,892 after the Fed’s announcement | Source: BTCUSD on TradingView.com

2022-01-27
Previous Post: Tesla’s Latest Financial Statement Shows Bitcoin Worth $1.26 Billion
Next Post: Behind the scenes of the new metaverse game Cross The Ages