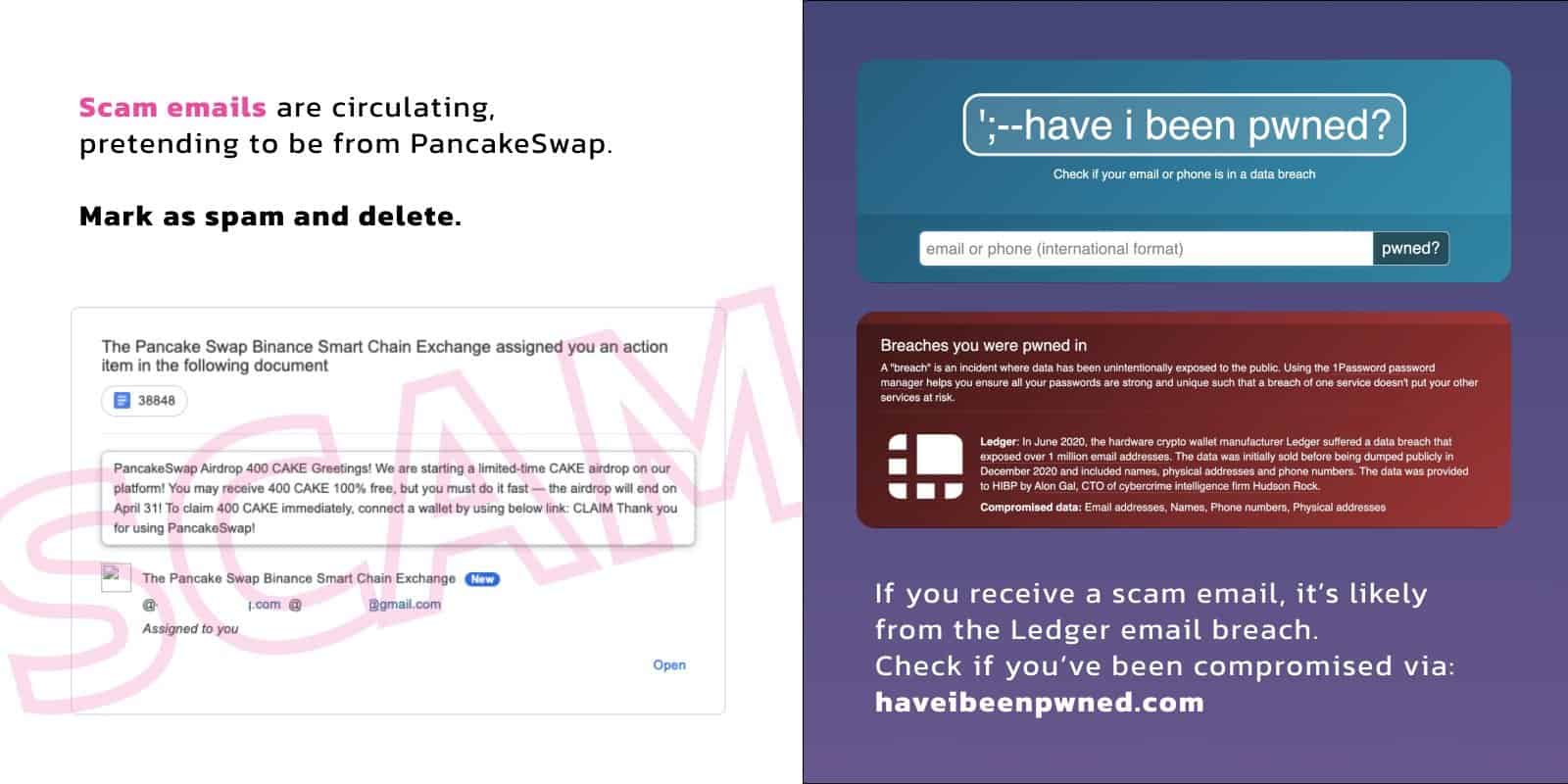 The rapidly increasing popularity of PancakeSwap – the decentralized exchange running on Binance Smart Chain – has caught the attention of bad actors. The project warned that a group of scammers is promoting fake airdrops trying to lure victims into claiming them through a fraudulent link.

The popularity of the DEX employing the Binance Smart Chain has gone through the roof in the past several months. The fast and cheap transactions resulted in high utilization, which led to surpassing the entire Ethereum network in terms of daily transactions last week.

When something in the cryptocurrency industry booms, bad actors are generally close by. Using its official Twitter account, PancakeSwap’s team warned about scam emails in which a group of unknown perpetrators impersonated the DEX and promoted a fake airdrop.

“There’s an ongoing email scam campaign. Scammers are pretending to be PancakeSwap, promising a FAKE airdrop of 400 CAKE in order to steal people’s funds.” – reads the project’s warning.

The post advised users to mark the email as spam and delete it if they receive such offers. In the screenshot provided, PancakeSwap showed that some of the users’ emails could have been taken without permission from last year’s breach against Ledger.

Airdrops are typically implemented to increase the popularity of a project by distributing its native crypto tokens (for free) to numerous wallet addresses. However, PancakeSwap outlined it doesn’t have such an initiative at the moment.

CAKE Heads for a New ATH

With the aforementioned growing use cases and demand for the decentralized exchange, its native digital token has enjoyed the past few months with impressive price performance.

CAKE dipped below $10 shortly after its listing on Binance in February and ranged between that line and $15 until the end of March. It started to quickly appreciate in value since then, and it neared $30 in the middle of April.

However, last week’s market crash harmed CAKE’s price as well, and the asset dipped below $20. Nevertheless, the token has spiked back up by more than 50% in a matter of days. As a result, CAKE overcame $30, broke its previous all-time high record, and marked a new one earlier today at just shy of $36 (on Binance).

The project’s market cap has grown to well above $5 billion, and the asset is within the top 30 coins by that metric.