Shiba Inu makes up the biggest holding of the top 1,000 ETH wallets

Data from whalestats.com shows that controversial meme token Shiba Inu is the most significant holding of the top 1,000 ETH wallets, excluding Ethereum.

Following a tremendous October run-up, in which $SHIB hit over 1,000% gains at its peak price of $0.00008846, things have cooled off significantly.

The Shiba Inu price is currently caught in a downtrend with $0.00004519 providing support, having bounced off this price level on three occasions since the peak.

Nonetheless, despite demonstrating instances of “Dogecoin-killing” throughout October. For example, overtaking $DOGE on market cap ranking on several occasions and consistently higher 24-hour trading volume, so far, $SHIB has failed to sustain this form.

On top of its meme coin status, this has led many to question if Shiba Inu is a flash in the pan that’s doomed to fail in the long term. However, regardless of this, as implied by the data from whalestats.com, ETH whales are not concerned, at least not in the short term.

What are ETH whales holding?

According to whalestats.com, Shiba Inu makes up the most significant holding of the top 1,000 ETH wallets excluding Ethereum, accounting for just over 20%, at $2.4 billion.

All other holdings are significantly lesser than $SHIB. The second-biggest being crypto.com’s CRO token, making up 6% of total holdings at $645 million. CRO has been in blistering form of late, growing 72% over the last week, hitting an all-time high of $0.59 today.

Third-placed is Bitpanda’s BEST token, which comes in at 5% of total holdings, equating to $593 million. 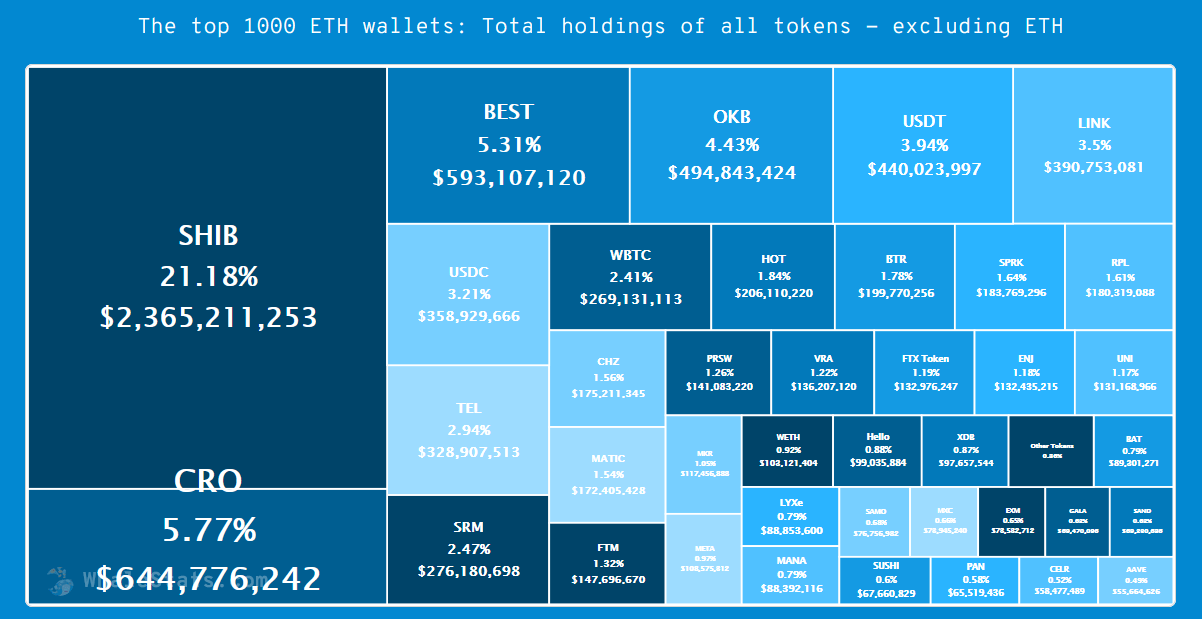 Should you fear Shiba Inu whales?

The danger of high whale concentration comes down to market manipulation. Sharp market movements are often related to liquidity — specifically, market depth and spreads. Whales, who control a high percentage of tokens, can temporarily drain liquidity and increase market volatility.

This practice is done for the whales’ benefit at the expense of all other token holders.

Following the start of $SHIB’s downturn earlier this month, crypto investor Aaron Brown laid into Shiba Inu, accusing the project of lacking solid underlying fundamentals. He added that, when combined with high whale concentration, non-whales should be careful.

“But for crypto with no underlying economics — whose value is determined only by speculation — concentrated ownership suggests a rigged game.”

The post Shiba Inu makes up the biggest holding of the top 1,000 ETH wallets appeared first on CryptoSlate.