Controversial meme token Shiba Inu stands its ground against criticisms by posting a new all-time high today. As well as that, the recently released Shiboshis NFTs have established a price floor of 1.2 ETH ($5,070) on the secondary market.

Critics have attacked the project on a number of fronts, the primary concern being its one quadrillion token supply. Some argue that this makes Shiba Inu a lousy investment due to its significant token dilution.

Nonetheless, much like how investors were snapping up Dogecoin earlier this year regardless of its weak fundamentals, Shiba Inu investors are also shrugging off concerns and piling in with their buy orders.

If this momentum continues, it won’t be long until the unthinkable happens and Shiba Inu flips Dogecoin.

Shiba Inu is on a tear

Shiba Inu’s entry in that list represents a surprising turnaround from six months ago. Back then, Vitalik Buterin had offloaded his gifted $SHIB for charitable purposes, and many said the token wouldn’t recover.

But it has. Since the start of October, $SHIB has been storming up the market cap rankings, making 11th place today off the back of massive buy pressure in the last 24-hours. This was enough to post a new all-time high of $0.00005806.

Since breaking its previous resistance of $0.00003550 on Sunday, $SHIB has hit clear sky territory. However, a wider market sell-off this morning (GMT) has put a damper on price discovery for the moment.

Shiba Inu launched their Shiboshi NFTs in mid-October via the ShibaSwap platform.

“These amazing Shibs, come with various traits that make each very unique and collectible in essence. For instance Laser Eyes, or Party Hat, as seen on many of them, in this incredible initial collection and will form part of our upcoming game release.”

Rather cleverly, the devs made it so that buyers had to dive deeper into the Shiba Inu ecosystem by making purchases of Shiboshis available with $LEASH only.

While critics may argue their points, Shiba Inu continues on in its mission to develop a vibrant community-run ecosystem. 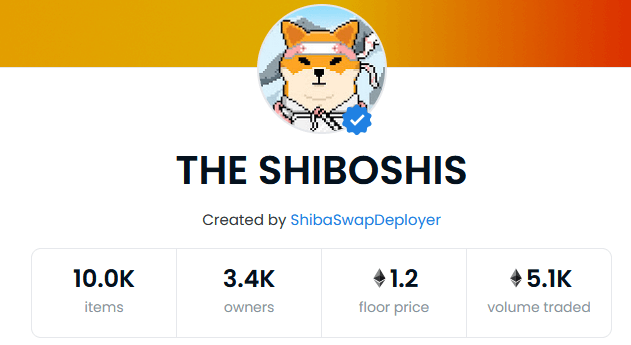