The US SEC currently has 19 pending Bitcoin ETF applications 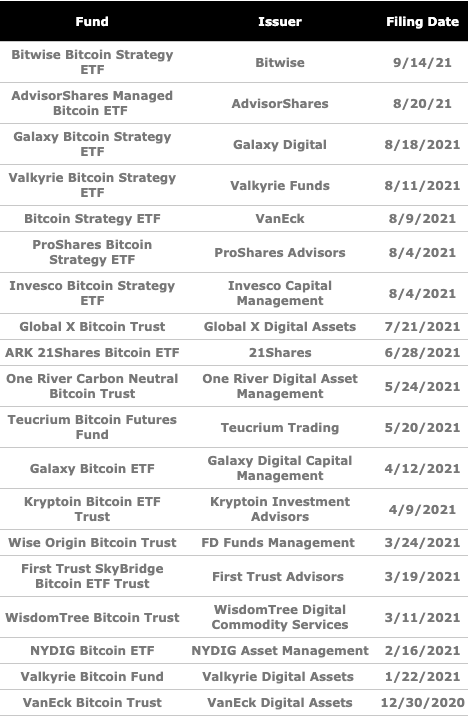 Bitcoin exchange-traded funds (ETFs) have long been considered the pinnacle of the crypto market—once approved, they would legitimize the industry and push it into the mainstream.

The lack of action from the U.S. Securities and Exchange Commission (SEC) might indicate that there’s very little improvement happening in this field. However, with new filings being submitted every month, the regulator is currently sitting on 19 Bitcoin ETF applications, showing that there’s substantial demand from the industry.

Each pending Bitcoin ETF application could ignite a bull run

While cryptocurrency ETFs aren’t a new thing on the market, as they’re already freely traded in countries such as Canada and Brazil, approving them in the U.S. would mark a major milestone for the industry.

According to the latest data from ETF.com, there are currently 19 Bitcoin ETF filings with the U.S. Securities and Exchange Commission (SEC), each one awaiting final approval before being launched.

Exchange-traded funds (ETFs) are a type of investment funds that comprise certain assets, or baskets of assets and issue shares whose prices are pegged to those assets. If approved, these ETFs would allow investors to get exposure to Bitcoin (BTC) without actually having to hold the cryptocurrency and trade the product on traditional stock exchanges alongside other, more traditional financial products.

Many experts believe that approving a Bitcoin ETF in the U.S. would open up capital inflows into the Bitcoin market.

This is a belief shared by SEC Commissioner Hester Pierce, who recently called the commission’s approach to the matter “outdated.” In an interview with CNBC this summer, she said that the lack of officially regulated Bitcoin ETFs not only can be perceived as a double standard but could also push investors to other, much riskier alternatives.

“The complications of not approving [a Bitcoin ETF] become stronger because people are looking for other ways to do the same kinds of things that they would do with an exchange-traded product,” she noted. “They’re looking at other types of products that aren’t as easy to get in and out of, they’re looking at companies, perhaps, that are somehow connected with Bitcoin or crypto more broadly.”

And while there has been no information coming from the SEC that would indicate when any one of the pending ETF filings would be approved, some believe a Bitcoin futures ETF has a much better chance of being approved this year.

Mike McGlone, a senior commodity strategist at Bloomberg Intelligence, said that there was a possibility for a Bitcoin futures ETF to be established before the end of the year. A Bitcoin futures ETF could work as an interim stage to a full ETF, he explained, noting that the sentiment was shared by Gary Gensler, the current chairman of the SEC.

The post The US SEC currently has 19 pending Bitcoin ETF applications appeared first on CryptoSlate.