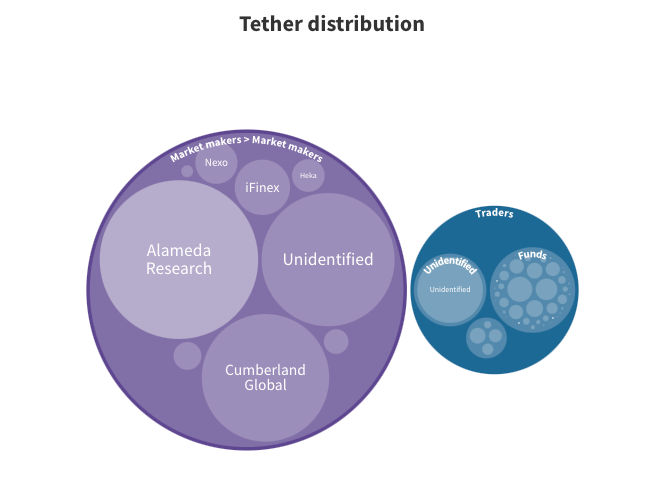 After several months of research, a report from Protos managed to identify exactly who acquired 70% of all USDT ever issued. The report looked at every single USDT ever sent to and from Tether across eight blockchains and layers it currently exists on, finding that the company distributed $108.5 billion in USDT since 2014.

The majority of the funds were sent directly to market makers and liquidity providers—a staggering $96.98 billion went to just six companies.

Analyzing USDT flowing out of Tether Treasuries and linked blockchain addresses to specific entities, Protos divided the distribution into three categories—market makers, funds and companies, and individuals. For research purposes, market makers were defined as entities that received multiple transactions from Tether Treasuries of over $100 million USDT.

Tether supplied these market makers with 89.2%, or just over $97 billion, of all the USDT it sent. Trading funds companies received $9.2 billion, while individuals received just $2.35 billion.

Market makers Alameda Research and Cumberland Global were found to be the biggest fish in Tether markets, receiving around 55% of its total outbound volume. Over $49 billion of their USDT was acquired in the past year alone.

Graph showing the distribution of USDT among AMMs and trading funds (Source: Protos)

Cumberland Global is the crypto-trading subsidiary of markets powerhouse DRW and counts VanEck among its clients. The company received $23.7 billion in USDT from Tether, with $17.6 billion received in the past year alone. As Cumberland is one of Binance’s primary liquidity providers, 79% of all of the USDT it received was issued directly to Binance.

iFinex, the mother company to Bitfinex and Tether, received at least $4.5 billion in USDT, but most of the transfers occurred before 2021. DeFi platform Nexo accounted for around 2% of Tether’s all outbound volume, receiving $2.6 billion in USDT, out of which roughly $1.45 billion went to Binance.

Neutral market maker Heka bought $1.5 billion worth of USDT from Tether, $1.1 billion of which was distributed in 2021 and utilized on Binance. Chicago-bound trading giant Jump Trading received $1.1 billion in USDT on Solana this year.

The post These are the six companies that bought almost $100 Billion USDT from Tether appeared first on CryptoSlate.