These factors preceded today’s Bitcoin, Ethereum sell off—here’s what could happen next 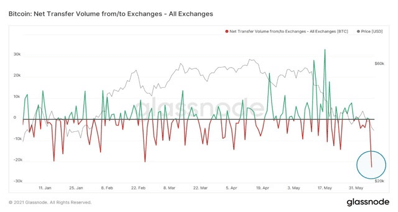 So what’s next for Bitcoin?

The Bitcoin chart looks bearish on several time frames as it can be seen that the price broke below the Symmetrical triangle (A chart analytical candle pattern used by the traders to determine the market trend), and closed below it.

Bitcoin and Ethereum markets saw another big sell-off on June 8, data from multiple sources show. The assets fell more than 10%, while some altcoins fell as much as 15%.

The move came on the back of the US government tightening its grip around the sector, but came even as countries like Paraguay, El Salvador, and Panama endorsed Bitcoin.

Bitcoin and Ethereum both fell through some of the crucial price support levels with each of them being down 11.5% and 14% respectively (at the time of writing).

Traders also warned that there might be more blood as several technical indicators turned bearish on several timeframes.

Popular trader Pentoshi tweeted that altcoins could dip even further as the majority of them were already heavily down.

I wouldn’t be rushing to buy alt dips personally. They can bleed more than you can imagine. https://t.co/9h3xfnsXje

However, data from Glassnode, a popular on-chain analytics tool, shows that Bitcoin outflows from exchanges continue to grow despite the big sell-offs. This meant investors were possibly buying and move their Bitcoins out of exchanges in anticipation of future rallies.

So what’s next for Bitcoin?

The Bitcoin chart looks bearish on several time frames as it can be seen that the price broke below the Symmetrical triangle (A chart analytical candle pattern used by the traders to determine the market trend), and closed below it.

The next possible support where a bounce can be expected is in the $30,200 region. In case the price continues to fall, it is almost certain that we can expect that support level to be hit. $30,000 is a crucial range and the price needs to stay above it.

What’s next for Ethereum?

Ethereum prices also fell along with Bitcoin which invalidated the ascending triangle pattern in which it was trading the past week.

There is no solid support till the $2,050 – $2,150 range. If the price closes below the current support ($2,500), it’s highly likely that the price might fall onto the lower supports in the coming days.

The bearish close will also lead to the 20-period moving average, becoming bearish leading to further downside. For budding traders, it is recommended to trade safely on such highly volatile, ranging days.

The post These factors preceded today’s Bitcoin, Ethereum sell off—here’s what could happen next appeared first on CryptoSlate.