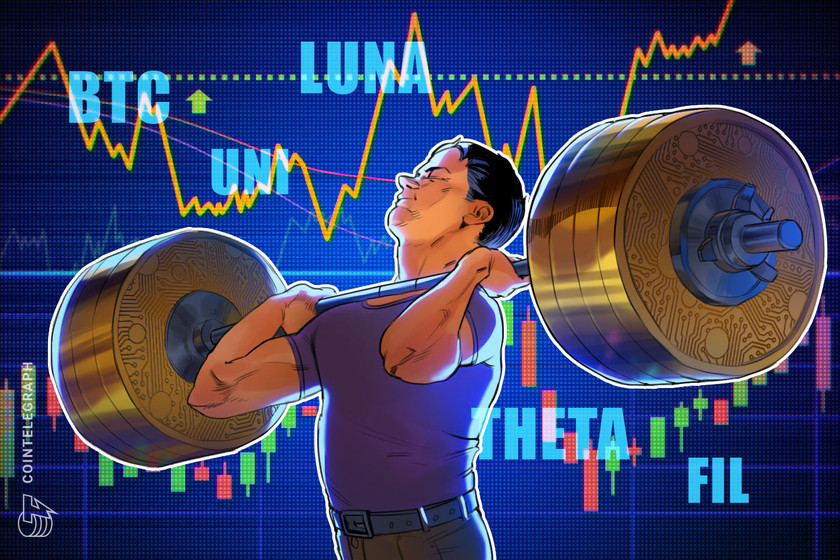 If bulls can propel Bitcoin to a new all-time high, UNI, LUNA, THETA and FIL are likely to outperform their competitors.

Although Bitcoin is showing some fragility near $60,000, Cointelegraph contributor Marcel Pechman analyzed derivatives data from various exchanges to show that top traders are still adding long positions near $57,000.

Bitcoin is in an uptrend and the bulls continue to buy the dips to the 20-day exponential moving average ($55,282). The long tail on today’s candlestick also shows that the bulls used the dips to accumulate.

Another possibility is that the price again turns down from the overhead resistance and the pair remains stuck in a tight range. If that happens, the next breakout is likely to result in a strong trending move.

The only bearish development visible on the chart is the negative divergence on the relative strength indicator (RSI). This bearish prediction could come into play after the price breaks and sustains below the 20-day EMA.

If that happens, the pair could drop to the 50-day simple moving average ($49,497), which is a critical support to keep an eye on. A break below this level could challenge the $43,006 support.

The 4-hour chart shows the formation of a symmetrical triangle, which usually acts as a continuation pattern. The price has bounced off the support line of the triangle, indicating that the bulls are defending this support.

If the bulls can propel the price above the moving averages, the pair could again attempt to rise above the resistance line of the triangle. If that happens, a move to the all-time high at $61,825 is possible. A breakout and close above this resistance could resume the up-move.

Alternatively, if the price turns down from the moving averages, the bears will try to sink the price below the triangle. If they manage to do that, the pair could drop to $53,288 and then $44,752.

Uniswap (UNI) is currently consolidating between $27.97 and $35.20. The bulls attempted to resume the uptrend on March 20 but the long wick on the candlestick and a close in the red suggests profit-booking near $35.20.

However, there hasn’t been any follow-up selling today. Both moving averages are sloping up and the RSI is in the positive zone, which suggests the path of least resistance is to the upside.

Contrary to this assumption, if the price turns down and breaks below the 20-day EMA ($30), the pair could drop to $27.97. This is an important support to watch out for because if it cracks, traders may rush to the exit and that could result in a deeper correction to the 50-day SMA ($25.39) and then $22.

The moving averages on the 4-hour chart have flattened out and the RSI is just above the midpoint. This suggests a balance between supply and demand.

If the price dips below the moving averages, a drop to $27.97 is possible. A bounce off this support could extend the stay of the pair inside the range.

The next trending move could start after the bulls push the price above $35.20 or the bears sink the pair below $27.97. Until then, the price may oscillate between the support and resistance levels of the range.

VORTECS™ data from Cointelegraph Markets Pro turned positive as the signal for LUNA rose above 70 on March 18, indicating a positive outlook when the price was still undecided about the next move fr $18.17.

The VORTECS™ score, exclusive to Cointelegraph, is an algorithmic comparison of historic and current market conditions derived from a combination of data points including market sentiment, trading volume, recent price movements and Twitter activity.

The chart above shows the VORTECS™ score climbed steadily from 62 to 76 on March 18, well before the price picked up momentum on March 19.

LUNA is in a strong uptrend as it continues to make record highs on a daily basis. The bears attempted to stall the uptrend on March 17 but could not keep the price down for more than a day, which suggests strong buying on every minor dip.

The long wick on the March 19 candlestick also shows profit-booking at higher levels, but the bulls again bought the dip and have pushed the price to a new all-time high today. This suggests the trend remains intact.

Both moving averages are sloping up and the RSI is above 84, indicating that bulls are in control. The next target objective on the upside is $27.46.

However, vertical rallies are rarely sustainable. Therefore, traders may wait for a correction or a consolidation to initiate fresh positions rather than chase the price higher. A break below $18.51 could result in a drop to the 20-day EMA ($14.79).

A strong rebound off this support will suggest the sentiment remains bullish as traders are buying the dips. But a break below the 20-day EMA could signal the start of a deeper correction.

The 4-hour chart shows the LUNA/USD pair is in a strong uptrend. The bulls have not allowed the price to dip below the 20-EMA during the most recent leg of the uptrend, which is a positive sign.

Therefore, traders should keep a close eye on the 20-day EMA because a break below it will be the first sign that the momentum may be ebbing. The next support on the downside is the 50-SMA. A break below $17 could suggest that the bears have the upper hand.

THETA has been in a strong uptrend for the past few days. The token rose to a new all-time high at $8.97 on March 19 but witnessed profit-booking at higher levels as seen from the long wick on the day’s candlestick.

However, the shallow correction on March 20 showed that traders were buying the dips and not rushing to the exit. During strong uptrends, the pullbacks are generally short-lived.

The bulls have again pushed the price to a new all-time high today, which shows the resumption of the uptrend. The THETA/USD pair could rally to $10.35 and then to $12.35. The upsloping moving averages and the RSI in the overbought zone suggest the bulls are in command.

This bullish view will invalidate if the bears sell at higher levels and pull the price back below $7.99. If that happens, it will suggest the current breakout was a bull trap.

The 4-hour chart shows the price bounced off the breakout level at $7.999 and the bulls did not allow the pair to drop below the 20-EMA. The bears attempted to stall the up-move at the downtrend line but failed.

Strong buying by the bulls has pushed the price above the downtrend line and the $9 overhead resistance. This suggests the next leg of the uptrend may have begun.

Contrary to this assumption, if the price turns down and breaks below the 20-EMA, it will signal that the momentum has weakened. A break below the 50-SMA will suggest that the bears are attempting to make a comeback.

Filecoin’s FIL token is in a strong uptrend. After its sharp rally on March 16 and 17, short-term traders seem to have booked profits, which has resulted in a minor correction on March 18. However, the shallow pullback is a positive sign as it shows that the majority of the traders are not rushing to the exit.

A breakout and close above this resistance could start the next leg of the uptrend, which could reach $128.55.

On the contrary, if the bears sink the price below $73.79, the pair could drop to the 20-day EMA ($59.95). A strong rebound off this support will indicate that the trend remains positive but a break below it will suggest a short-term top may be in place.

The rebound off the $73.79 support indicates strong demand at lower levels. However, the bears are not relenting as they are aggressively defending the $86 level. If the bears sink the price below the 20-EMA, the pair could again drop to $73.79. A break below this level will suggest advantage to the bears.

Alternatively, if the pair rebounds off $73.79, it may extend its stay inside the range for a few more days. The flattening 20-EMA and the gradually weakening RSI also point to a possible consolidation. A break above $86 could signal resumption of the uptrend.