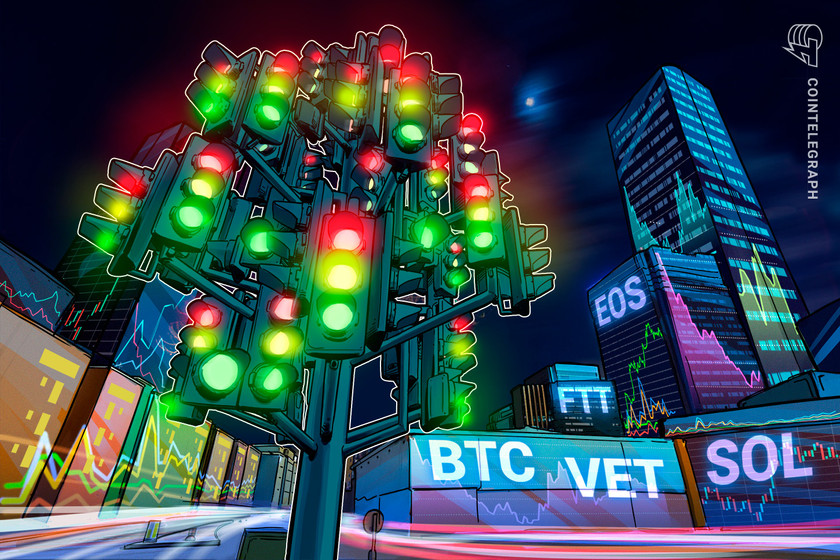 The bulls are trying to stabilize Bitcoin price and if they succeed, VET, SOL, EOS and FTT could quickly bounce back to their local highs.

After this most recent pullback, investors will be on the fence on whether they should buy the dips or close their positions in anticipation of further decline? Traders should keep a close watch on the strength in the recovery as that will provide an insight about the next possible move.

Let’s study the technicals of the top-5 cryptocurrencies that could attempt to lead the recovery in the next few days.

Bitcoin’s failure to rebound off the 20-day exponential moving average ($59,053) on April 17 showed the lack of buying on dips. The selling picked up pace today after the price slipped below the 50-day simple moving average ($56,264).

However, the long tail on today’s candlestick suggests that buyers are attempting to stall the decline at $50,460. If the rebound sustains, the bulls will again try to resume the uptrend but they are likely to face stiff resistance between $61,825.84 and $64,849.27. A breakout of this resistance zone will suggest that the current fall was only a pullback to shake out the weak hands.

On the other hand, the failure to sustain the rebound or build upon the bounce in the next few days will indicate that demand dries up at higher levels. That is likely to invigorate the bears who will then try to assert their dominance and break the $50,460 support.

If they manage to do that, selling could intensify as the short-term speculators and traders may also dump their positions. That could pull the price down to $43,006.77. This is an important level to watch out for because a break below it will suggest that the BTC/USDT pair has topped out in the short term.

The 4-hour chart shows the bulls purchased the drop to $50,460 aggressively but the recovery is facing resistance at $56,500. This suggests that traders stuck at higher levels are closing their positions on rallies.

However, the positive sign is that the bulls have not given up the fight. They are trying to defend $53,000 support. This could result in a tight consolidation between $53,000 and $56,500 for a few days.

The downsloping moving averages and the relative strength index (RSI) near the overbought territory show the bears have the upper hand.

VeChain’s (VET) sharp rally on April 16 had pushed the RSI above 87, indicating the rally was getting overheated in the short term. The altcoin tried to extend its up-move on April 17 but the long wick on the day’s candlestick showed that traders booked profits at higher levels.

The selling continued today and the VET/USDT pair slumped to $0.169, just above the 61.8% Fibonacci retracement level at $0.16. However, the long tail on today’s candlestick shows strong buying at lower levels.

If the bulls can sustain the rebound, the pair will once again attempt to rise to the overhead resistance at $0.279. A breakout of this resistance could resume the uptrend. The next target objective on the upside is $0.362.

On the other hand, if the price turns down from $0.279, the pair could remain stuck in a range for a few days. This positive view will invalidate if the bears sell on rallies and sink the price below the $0.16 support.

The 4-hour chart shows the bulls purchased the drop to the 50-SMA but the recovery hit a wall at $0.227. The bears tried to resume the correction but the bulls again purchased the dip below the 20-EMA. This shows bears are selling on rallies and bulls are buying on dips.

Conversely, if the bears again sink the price below the 20-EMA, the pair could drop to the 50-SMA. A break below this level will tilt the advantage in favor of the bears.

Solana (SOL) had been in a corrective phase since hitting an all-time high at $29.92 on April 12. Although the price plunged below the 20-day EMA ($24.49) today, the bears could not capitalize on the advantage. The altcoin has quickly bounced back above the 20-day EMA, indicating strong demand at lower levels.

The upsloping moving averages and the RSI in the positive territory suggest that bulls have the upper hand. If they can drive the price above $29.92, the SOL/USDT pair could resume the uptrend and rally to $38.72.

Contrary to this assumption, if the price turns down from the overhead resistance and breaks below the 20-day EMA, it will suggest that traders are closing their positions on rallies. The pair could then decline to $21 and later to the 50-day SMA ($18.60).

The 4-hour chart shows that the break below $24.70 attracted sharp selling but the bears could not sustain the lower levels. The pair rebounded strongly and climbed back above the $24.70 level.

If the bulls can propel the price above $28.64, a retest of $29.92 is possible. The 20-EMA is turning up and the RSI has jumped above 55, indicating the bulls have a slight advantage in the short term.

However, if the price turns down from the current level and breaks below $24.70, the next stop could be $21.10. Such a move will suggest that bears have overpowered the bulls, which could result in a deeper correction.

EOS turned down from the stiff overhead resistance at $8.69 after the bulls failed to push and sustain the price above it on April 16 and 17. The sharp selling pulled the price down to $5.86, just above the breakout level at $5.60.

If the bulls can flip $5.60 into support, the EOS/USDT pair could again try to move up to $8.69. A break above $8.69 may start the next leg of the uptrend that could reach $11. Alternatively, if the price turns down from $8.69, the pair could remain range-bound for a few days.

This positive view will be negated if the bears sell on rallies and sink the price below the breakout level at $5.60. Such a move could pull the price down to the 50-day SMA ($4.98), signaling that bears are back in the driver’s seat.

The 4-hour chart shows the bulls are trying to start a relief rally. If they can sustain the price above $6.93, the pair could rally to the 20-EMA where the bears are likely to offer a stiff resistance.

If the price turns down from the 20-EMA, the pair may again drop to $6.17 and then to $5.60. Such a move will suggest that sentiment has turned negative and the bears are selling on rallies.

Conversely, if the bulls can push the price above the 20-EMA, the momentum could pick up and the pair could rally to $8.69.

FTX Token (FTT) has been in a corrective phase since topping out at $59.57 on April 14. The price plummeted below the 20-day EMA ($48) today but the long tail on the candlestick shows strong buying at lower levels.

If they succeed, the FTT/USDT pair could start its northward march toward the next target objective at $71.89.

Contrary to this assumption, if the bears sustain the price below the 20-day EMA, the selling could intensify, which could pull the price down to the 50-day SMA ($40). A break below this support will suggest that the pair has topped out in the short term.

If the price turns down from the 20-EMA, it will suggest that traders are selling on rallies. The bears will then try to sink the price below $44. If they succeed, the pair could slump to $40 and then to $37.