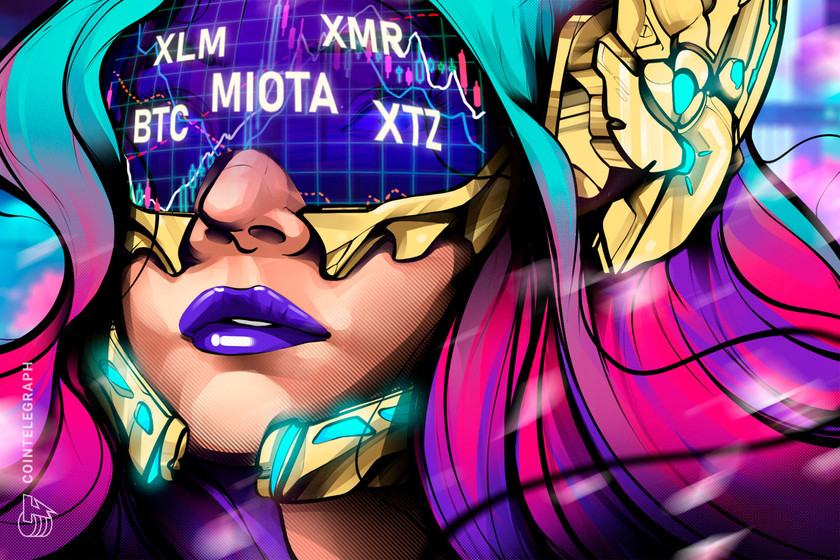 Traders appear to be waiting for a trigger to start the next leg of Bitcoin’s uptrend and if that happens, XLM, MIOTA, XMR and XTZ could join the party.

Onchain indicator HODL waves suggests that both the long-term investors and the short-term speculators are not booking profits as they expect higher levels in the future. An increase in the number of HODLers is generally a bullish sign but could become an overhang if fresh money dries up and the market starts to reverse direction.

If that happens, the short-term speculators are likely to panic first and dump their positions. That may hit stops of the swing traders and intensify the selling, paving way for a deeper correction.

As markets wait for a trigger, let’s analyze the charts of the top-5 cryptocurrencies that could benefit from a bullish sentiment.

The price has yet to close above $60,000 which means the inverse head and shoulders pattern is still not complete.

The bears will try to capitalize on the small window of opportunity and pull the price down to the 20-day exponential moving average ($57,513). A strong bounce off this support will increase the possibility of a break above $61,825.84.

On the other hand, if the bears sink the price below the 20-day EMA, the pair could challenge the critical support at the 50-day simple moving average ($54,723). A break below this support will be the first indication of a possible change in trend.

The 4-hour chart shows the bears are active above $60,000. However, the positive sign is that the bulls have not allowed the price to sustain below the 20-EMA. This means the bulls are buying on every minor dip.

Stellar Lumens (XLM) broke above the $0.60 resistance today and rose to a new 52-week high at $0.65. Whenever an asset hits a new 52-week high, it is a sign of strength because it shows that traders are in a hurry to buy as they expect the price to rise further.

The upsloping 20-day EMA ($0.46) and the relative strength index (RSI) in the overbought territory suggest the bulls have the upper hand. If the bulls can propel the price above $0.65, the XLM/USDT pair could start the next leg of the uptrend that could reach $0.72 and then $0.85.

However, the long wick on today’s candlestick suggests that the bears have other plans. They are trying to trap the aggressive bulls and pull the price back below $0.60. If the bulls do not allow the price to dip below $0.55, it will suggest accumulation on dips. That will keep the sentiment positive.

Contrary to this assumption, if the bears sink the price below $0.55, a drop to the 20-day EMA is possible. A break below this support will indicate that the bulls have lost their grip.

The 4-hour chart shows the pair closed above $0.60 but the bulls could not build upon this strength. The bears pounced on the opportunity and have pulled the price back below the breakout level at $0.60.

However, if the bears fail to sink the price to the 20-EMA, it will suggest the bulls are accumulating on dips. That will increase the possibility of the resumption of the up-move. Conversely, a break below the 20-day EMA may tilt the advantage in favor of the bears.

IOTA (MIOTA) is in an uptrend. The bulls pushed the price above the psychologically important level at $2 on April 10. If bulls can sustain the breakout, the up-move could reach the next target objective at $2.35 and then $2.60.

The upsloping 20-day EMA ($1.66) and the RSI near the overbought zone suggest the bulls have the upper hand.

However, if the bulls fail to sustain the price above $2, the bears may try to pull the price down to the 20-day EMA. The bulls have successfully defended this support since the start of the current leg of the rally in March.

The 4-hour chart shows profit-booking above $2. The MIOTA/USDT pair could now drop to the 20-EMA, which is sloping up. If the price rebounds off this level, it will enhance the prospects of the resumption of the uptrend.

On the contrary, if the bears sink the price below the 20-EMA, the pair could extend its decline to the 50-SMA. Such a deep correction could delay the start of the next leg of the up-move.

Monero (XMR) broke above the $268.60 resistance on April 10, indicating the possible resumption of the uptrend. If the bulls can sustain the breakout, the altcoin could rally to the next target objective at $334 and then $384.

The rising 20-day EMA ($258) and the RSI above 75 suggest the path of least resistance is to the upside.

However, if the bulls fail to sustain the price above $288.60, the XMR/USDT pair could drop to the 20-day EMA. A strong bounce off this support will suggest the sentiment remains positive and the bulls are buying on dips. The bulls will then make one more attempt to resume the uptrend.

On the other hand, if the bears sink the price below the 20-day EMA, it will suggest a possible change in sentiment. That could result in a drop to the 50-day SMA ($232).

The 4-hour chart shows the bears attempted to stall the rally near the psychological resistance at $300 but the bulls did not give up much ground. They purchased the dip to the 20-EMA and pushed the price above $300.

The rising moving averages and the RSI near the overbought zone suggest the bulls are in control.

This positive view will invalidate if the price turns down and breaks below the moving averages. Such a move will indicate the demand has dried up and traders are booking profits. That could pull the price down to $250.

Tezos (XTZ) is in a strong uptrend. It broke above the stiff overhead resistance at $5.64 on April 5 and completed a successful retest of the breakout level on April 7 and 8. The altcoin resumed its uptrend and made a new all-time high at $7.21 on April 10.

The 20-day EMA ($5.42) is sloping up and the RSI is near the overbought territory, indicating advantage to the bulls. In a strong uptrend, corrections usually last between one to three days as traders buy every minor dip aggressively.

The long tail on today’s candlestick suggests traders are buying at lower levels. If they can drive the price above $7.21, the XTZ/USDT pair could rally to the next target objective at $8.14.

The 4-hour chart shows the bulls are trying to arrest the pullback at the 20-EMA. If they can push the price above $6.85, a retest of $7.21 is possible. A breakout of this resistance will start the next leg of the up-move.

Contrary to this assumption, if the pair breaks and sustains below the 20-EMA, it may drop to the 50-SMA. The bulls are likely to defend this support aggressively because the price has not dipped below the 50-SMA since March 29.