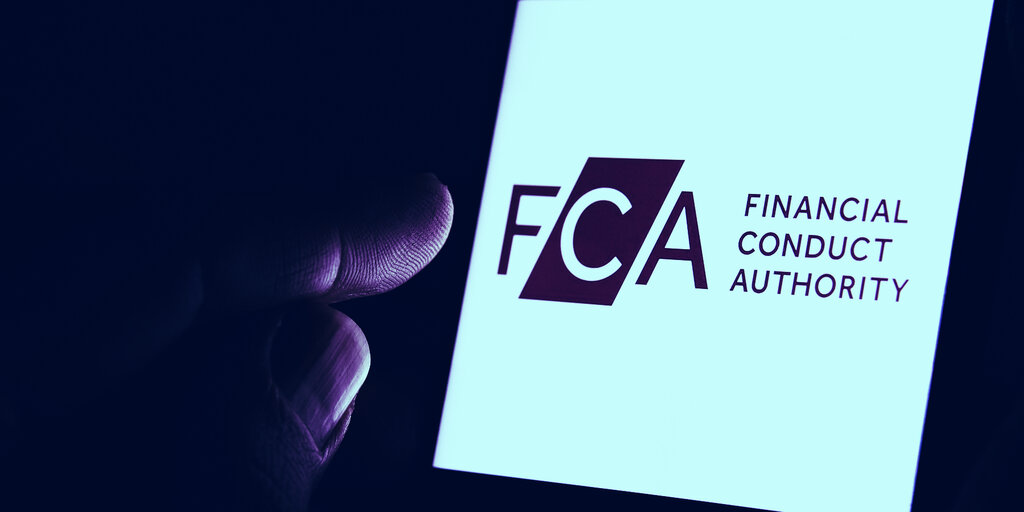 The UK’s Financial Conduct Authority (FCA) has confirmed to Decrypt that its decision to issue a consumer warning against Binance Markets Limited over the weekend was related to the firm’s anti-money laundering standards.

“Putting two and two together, we obviously have issues with standards in that area,” a spokesperson for the FCA told Decrypt today.

The FCA declined to elaborate on the specific concerns it has regarding Binance Markets Limited’s approach to AML. “It’s difficult, we don’t want to be specific about our concerns with the firm, but certainly, they’re not on our register,” the spokesperson added.

Crypto trading is not regulated in the UK. But the FCA is the regulatory body that conducts anti-money laundering and counter-terrorist financing supervision over registered crypto asset businesses.

Binance is not banned in the UK

The FCA says its consumer warning against Binance Markets Limited is not an outright ban on the crypto exchange operating in the UK.

All that the FCA has done is stop Binance Markets Limited from providing regulated activities to consumers in the UK. That does not mean that UK customers cannot access Binance from home, or anywhere else with an Internet connection. They can continue to use Binance’s main platform for trading.

“Effectively, all you need to do if you’re a UK consumer [to use Binance] is use Binance.com,” the FCA spokesperson said, adding, “I think ban is too strong a word. We can only act where we have powers to, so we’ve taken what we think is an appropriate step to protect consumers as much as we can.”

What is Binance Markets Limited?

In June 2020, Binance acquired a company called EddieUK and renamed it Binance Markets Limited. Two days prior to this name change, Binance CEO Changpeng Zhao was appointed as “person with significant control” over the company, which is now headquartered in London.

Binance Markets Limited, per a spokesperson, was acquired in order to help launch binance.uk, a would-be crypto exchange designed to service UK consumers in broadly the same way that binance.us services US consumers.

Binance.uk has not launched, but if it ever does get regulatory approval, Binance Markets Limited would “own and operate” binance.uk, a Binance spokesperson told Decrypt.

Binance CEO CZ Still Says His Company Has No Headquarters

The FCA also told Decrypt that Binance’s apparent lack of a headquarters is a “huge issue.”

At the 2021 Ethereal Virtual Summit earlier this year, Binance CEO Changpeng “CZ” Zhao reiterated that the company has no headquarters. “Everybody’s definition of a headquarters of a company is slightly different,” he argued. “Our leadership team are not sitting in one office, we don’t have a clear place where we can go.”

Binance has previously been based in China, Japan, Taiwan and Malta; last year, Malta clarified that Binance is not licensed to operate in the country. Five months later, the Malaysia Securities Commission alleged that the company was operating illegally in Malaysia.

In 2017, the year Binance left China, it registered Binance Holdings Limited in Georgetown, Cayman Islands. A corporate linkage document previously seen by Decrypt shows the Cayman Islands as Binance’s headquarters, and the company has also previously used this address to register several trademarks of the Binance name and logo.

In 2019, Binance also registered the Binance Investments Company in the Seychelles. Meanwhile, it is widely known that CZ himself is based in Singapore.

Why Malta ended its love affair with Binance

The problem with CZ’s favored argument that the definition of a headquarters is unclear is that, on the contrary, it’s a pretty simple and universal distinction: a company’s corporate headquarters is its main business office, and is typically the legally registered address from which its business is run. Binance Markets Limited for example, is headquartered at 167-169 Great Portland Street, London—and has been since June 24, 2021.

Binance claims no notice from FCA

The FCA confirmed to Decrypt that its recent consumer warning over Binance Markets Limited was motivated by the company’s apparent lack of AML controls.

This, however, came as news to Binance. “This is the first clear confirmation I’ve had that the FCA has taken that line, I’m quite surprised to hear that from the FCA,” a Binance spokesperson told Decrypt.

Immediately following the FCA’s announcement, Binance also issued a statement saying, “We take a collaborative approach in working with regulators and we take our compliance obligations very seriously.”