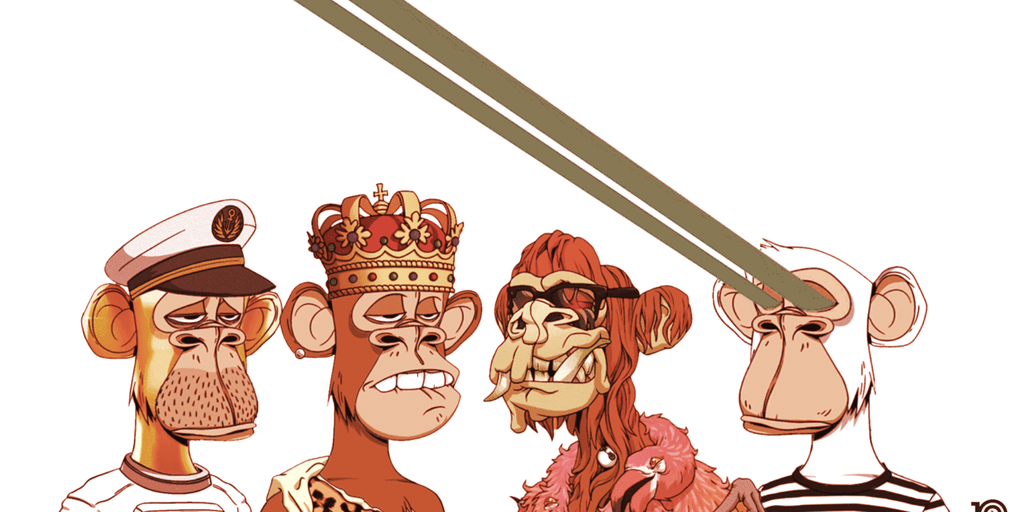 Reimagining the virtual band playbook of Gorillaz with a crypto twist, major music label Universal Music Group announced today that it has formed a “metaverse group” featuring a quartet of characters depicted in the Bored Ape Yacht Club NFT collection.

The band, Kingship, is composed of characters pulled from NFTs owned by noted collector Jimmy “j1mmy” McNelis, who recently sold another one of his Bored Ape NFTs for $3.4 million at a Sotheby’s auction. Universal’s “next-gen label” 10:22PM will spearhead the effort.

The label will develop music for the band to “perform” in animated and virtual world settings as the online metaverse grows and evolves. Universal also plans to release NFTs based around the band, which can be used for exclusive access into events, and will let existing Bored Ape Yacht Club NFT holders have a first crack at purchasing them.

Band manager Nicholas Adler, who is also the manager and brand curator for rapper and NFT collector Snoop Dogg, told Decrypt that a Universal representative initially approached him about creating a project more generally around the Bored Ape Yacht Club.

Adler had already been connected with McNelis, an early collector of hundreds of NFTs from the project, and proposed working with some of McNelis’ owned Apes with rarer attributes, such as golden fur or laser eyes. Now that the deal is inked, they’re working on figuring out storytelling elements around the characters, not to mention plans for the music.

“The goal was to creatively come up with the right package of Apes,” said Adler. “We’re developing the personalities and [NFT] drops around them. We’re developing sounds; we’re developing stories and narratives. I think that the project, the process, and the music will be something that consumers and fans will see online as we develop it.”

Adler suggested that McNelis has already generated value and interest around his owned NFTs, pointing to the aforementioned record Sotheby’s sale. However, they will also work with other creators to bring the Kingship project to life.

“With a great team of collaborators, and with the biggest record label in the world behind you, I think you can create an amazing crew and amazing story,” said Adler. “We want it to be authentic, and we’re going to be able to test the community before we drop stuff.”

The Bored Ape Yacht Club, created by Yuga Labs, is one of the most popular collections in the NFT market. Between the core collection of 10,000 Yacht Club NFTs and subsequent NFTs in the Bored Ape Kennel Club and Mutant Ape Yacht Club collections, the Ethereum-based project has generated over $1 billion in secondary market sales, per CryptoSlam.

An NFT acts like a receipt to a provably scarce digital item, including artwork, profile pictures, video clips, and more. The market has ballooned over the course of 2021, including nearly $10.7 billion worth of trading volume in Q3, according to DappRadar.

Bored Ape owners not only have an increasingly valuable digital collectible—the cheapest available right now on the OpenSea marketplace is priced around $156,000—but also full commercial rights to the illustration itself (but not the Bored Ape branding).

Kingship features three Bored Apes and one Mutant Ape, all of which are part of McNelis’ personal collection. McNelis is also founder and CEO of NFT42, an NFT production firm that counts investors like Mark Cuban and Gary Vaynerchuk’s VaynerFund.

Although individual NFT owners have rights to their respective Bored Ape characters, Yuga Labs is also working to expand the overall brand across the entertainment spectrum. The studio recently signed veteran music executive and tech investor Guy Oseary to spread the Bored Apes into sectors such as music, movies, and TV.

The metaverse refers to the projected future evolution of the internet, in which users will command avatars in shared 3D spaces. NFT avatars and other user-owned digital assets are expected to play a significant part in that future, with those shared environments used for social interactions, work, play, and more.

Facebook is one of the companies plotting a major move in the space, recently rebranding its parent company as Meta to reflect its increasing metaverse focus. Ethereum-based metaverse games such as Decentraland and the upcoming The Sandbox have seen surging token valuations in the wake of Facebook’s move. Both settings could serve as potential digital locales for virtual concerts, as Snoop Dogg plans to do in The Sandbox.

Gorillaz is a previous virtual band initiative co-created by musician Damon Albarn of the band Blur and illustrator Jamie Hewlett. Formed in 1998, the Grammy Award-winning band is depicted as having cartoon members and has sold 25 million records to date. Adler confirmed that Kingship will draw inspiration from that project, albeit with a new Web3 slant.

“Absolutely,” he told Decrypt. “Gorillaz is the north star here.”