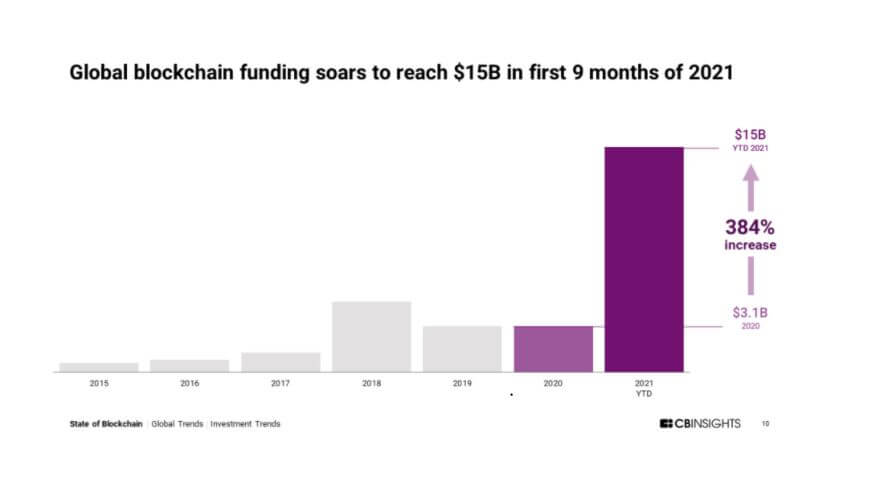 According to CB Insights, VC funding for crypto globally was up 384% from the same 9 month period last year. Global VC for this year alone reached an incredible $15 billion.

Coinbase Ventures was the most active crypto investor in the third quarter by a significant margin with 24 deals, while CMT Digital and Polychain Capital tied for second with nine deals each.

The average global deal in the blockchain sector reached $21 million for the third quarter. Amongst the top 10 equity deals were FTX, Sorare, Genesis Digital Assets, Fireblock and Bitpanda.

In terms of geography, the U.S. leads in VC funding, followed by Asia and Europe respectively. Funding from the US is up 11x year on year to a record high of $2.97 billion in the third quarter.

Reaching a record high crypto exchanges raised nearly $2 billion in venture capital this quarter. Q3 also saw the birth of 4 crypto exchange unicorns, bringing the total to 11 this year alone. The US also leads in the number of Unicorns so far this year with a total of 7.

It isn’t a surprise to hear that NFT funding has skyrocketed this year, up 6,523% from 2020 with 46 deals for NFT startups in the third quarter.

According to the report, the top investors by company count were Coinbase ventures, Jump Capital, B Capital Group, Polychain Capital and Lightspeed venture partners.

The post Venture funds poured over $6.5 billion into crypto in Q3 2021 appeared first on CryptoSlate.