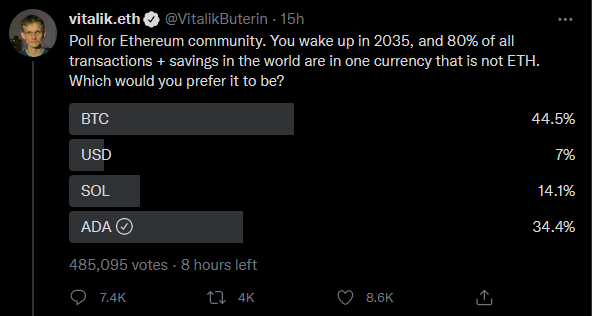 In an unexpected Twitter poll, Vitalik Buterin asked the ETH community which currency they want to dominate in 2035 if it isn’t Ethereum.

“Poll for Ethereum community. You wake up in 2035, and 80% of all transactions + savings in the world are in one currency that is not ETH. Which would you prefer it to be?“

Surprisingly, at one point, Cardano’s ADA was in the lead with 42% of the votes. But, with eight hours remaining (at the time of writing) before the poll closes, it’s all changed, and a somewhat predictable result is taking shape.

Buterin was described as uncanny and mystifying by Wired in 2016, a time when Ethereum was gaining traction as a worthy Bitcoin rival.

Even so, to this day, Buterin often divides opinion. Not so much for his skill as a programmer, but more so his peculiarities within a social context.

Michael Perklin, Head of Security at Ledger Labs, who has known Buterin for ten years at this point, commented on this nonconformist laissez-faire approach to life by recounting an instance of seeing him with mismatched Hello Kitty socks on.

“I saw him on the commuter train and he was wearing mismatched Hello Kitty socks.

And this is the person building the infrastructure that is challenging the power structures of the most important financial institutions out there.”

Be that as it may, any true aficionado of Japanese pop culture knows Keroppi is where it’s at. And to a lesser extent Doraemon, for the legitimate oddballs out there.

At the same time as posting the poll, Buterin also asked Twitter for the “most unhinged criticisms” of him. He included tweets he’d seen about his weight, likeness to an alien, Bond villain, and school shooter to start the ball rolling.

What are the craziest and most unhinged criticisms of me you’ve seen on twitter or elsewhere? Here are a few good ones, I wonder what else people have seen that I haven’t! pic.twitter.com/2qvwgNkHyM

Given his sharp sense of humor and ability to laugh at himself, perhaps posting a poll on succeeding Ethereum isn’t that unusual after all.

Which currency will succeed Ethereum?

In asking which currency should monopolize in a hypothetical future scenario, if it isn’t Ethereum, Buterin posted two polls.

The first gave voters the choice of BTC, USD, SOL, and ADA. Currently, BTC leads with 45% of nearly half a million votes. ADA makes second with 34%. SOL comes in at the third spot with 14%, while USD places last with just 7% of the votes.

The second poll features less popular choices, in market cap and to a Western audience, in TRON, BNB, CNY, and NEO. This is reflected in the second poll garnering fewer votes at 213,000 at the time of writing.

Despite losing ground lately, TRON leads the second poll with 43% of the votes, closely followed by BNB, which takes 33%. NEO places third with 18%, and CNY comes last with 6%. 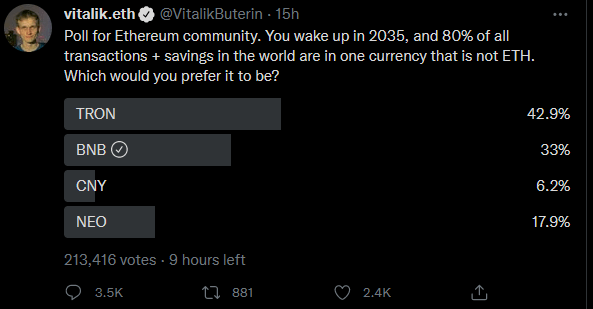 Although Twitter polls are far from rigorous, the one constant in both polls is fiat currencies coming in dead last.