Want to meet Satoshi Nakamoto? A bronze statue honoring the Bitcoin creator is now in Budapest 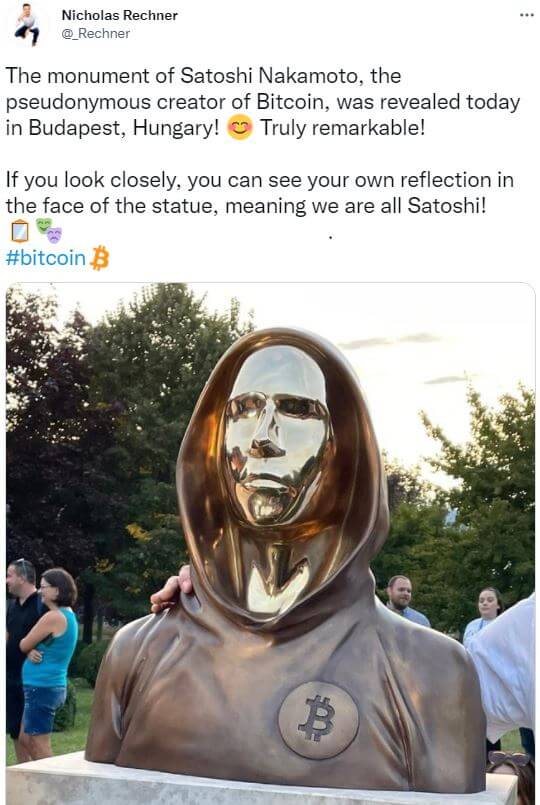 A bronze statue paying homage to “Satoshi Nakamoto,” the anonymous creator of Bitcoin has been unveiled in Budapest last week. The statue was sculpted by artists sculptors Reka Gergely and Tamas Gilly and the inspiration for the project came from Andras Gyorfi, a Bitcoin journalist based in Hungary.

The statue is located in a technology park in the Hungarian capital Budapest. The bronze bust shows a plain face, wrapped in a bronze hoodie stamped with the bitcoin logo. It is heavily polished on purpose to make it reflective.

The statue’s creators say it is the first in the world to honor the mysterious cryptocurrency creator Satoshi Nakamoto, a pseudonym for the Bitcoin inventor or inventors, whose identity is unknown.

The event attracted several hundred people and has been picked up by media outlets across the world. Although nobody has come forward to claim responsibility for developing Bitcoin it continues to gain interest from millions of investors across all industries.

It was also adopted as legal currency in El Salvador earlier this month.

Gyorfi said the statue is a token of respect to Nakamoto, and an effort to “raise awareness toward blockchain and cryptocurrencies”.

Along with contributions from other Hungarian Bitcoin enthusiasts, he collected around $10,000 (€8,400) in cryptocurrency donations to finance the creation of the bust.

Watch the unveiling of the Satoshi Nakamoto Statue here.

The post Want to meet Satoshi Nakamoto? A bronze statue honoring the Bitcoin creator is now in Budapest appeared first on CryptoSlate.