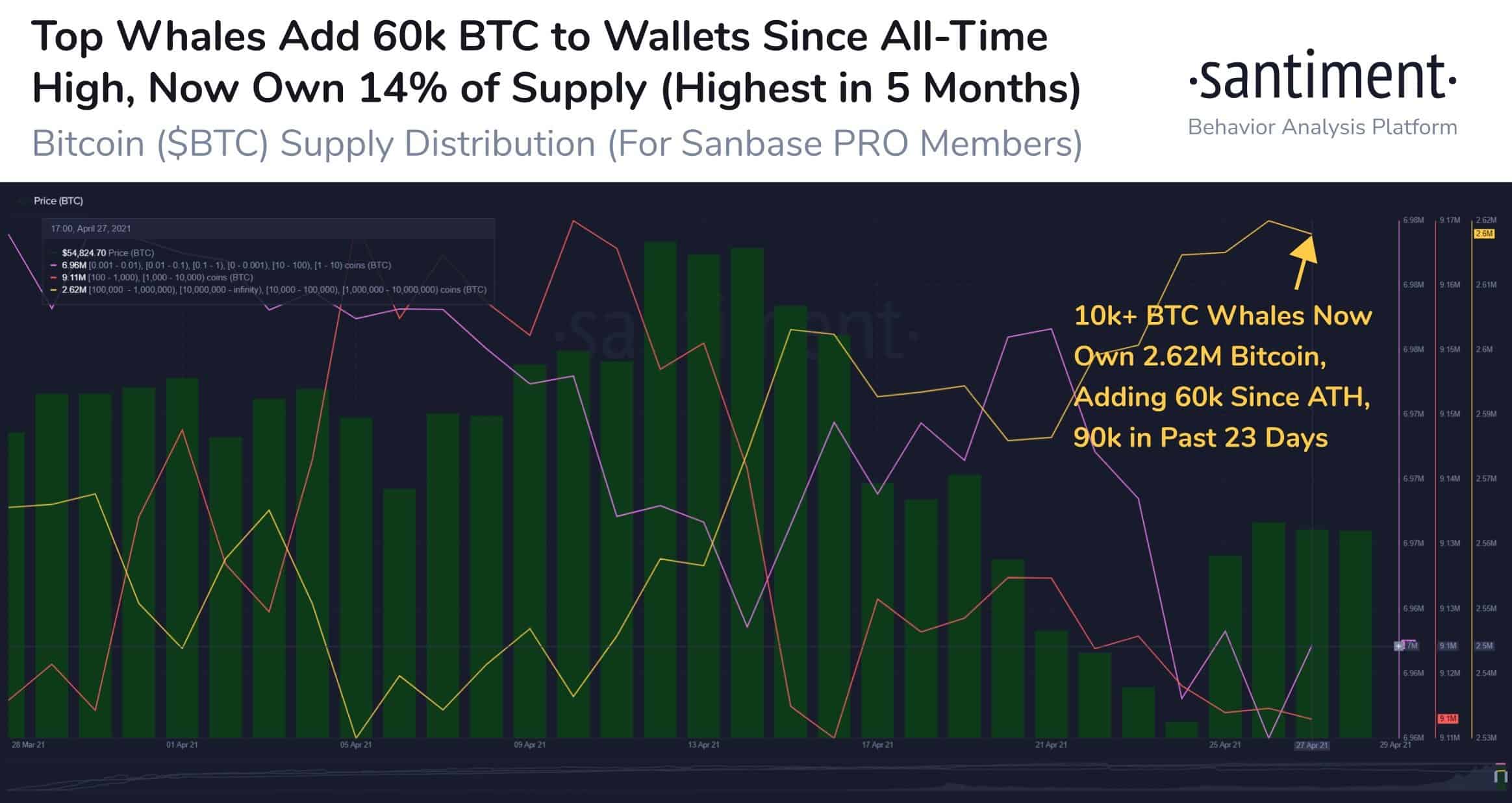 Despite the highly volatile month of April so far, cryptocurrency whales have kept accumulating sizeable portions. On-chain data reveals that large BTC addresses have expanded their holdings by nearly 100,000 coins in several weeks. Similar developments are seen for Ethereum (ETH) and Ripple (XRP) as well.

Although April has been historically a highly favorable month for bitcoin, this year, the situation is somewhat different. Consequently, it appears that some of the severe price dumps will prevent BTC from closing its seventh consecutive month in green.

However, these volatile movements haven’t deterred bitcoin whales – meaning wallets containing at least 10,000 coins – from accumulating more portions of the underlying asset. Just the opposite reveals data from the analytics company – Santiment.

The firm categorized these addresses as “uber large” and indicated that they “continue to get richer and accumulate as price range.” Ultimately, Santiment asserted that BTC whales had purchased roughly 90,000 bitcoins since April 5th.

From a USD perspective, this considerable amount is close to $5 billion. As the graph below demonstrates, 60,000 coins went to those addresses after the all-time high marked on April 13th at $65,000. In other words, whales were significantly more active when the asset started to retrace, as two-thirds of their April purchases came after the middle of the month.

ETH and XRP Whales Are Not Far Behind

Further Santiment data showed that the demand for some altcoins has increased in April as well. The number of Ethereum whales has risen to a new record level of 1,311. Furthermore, a deeper look shows the high concentration of ETH tokens in those wallets.

According to Santiment, Ethereum whales have over 80 million coins, while the total circulating supply is 115,650,000 as of writing these lines. Meaning that roughly 70% of ETH’s current supply is held by 1,311 addresses.

XRP whales have entirely changed their tune on the token. After the SEC alleged the payment processor of conducting an unregistered security sale, whales dumped significant portions of their holdings.

However, their appetite is back now as Ripple has gained a few wins in the ongoing legal case against the Securities and Exchange Commission. Santiment’s data suggests that 19 new addresses with at least one million XRP have emerged since April 23rd.